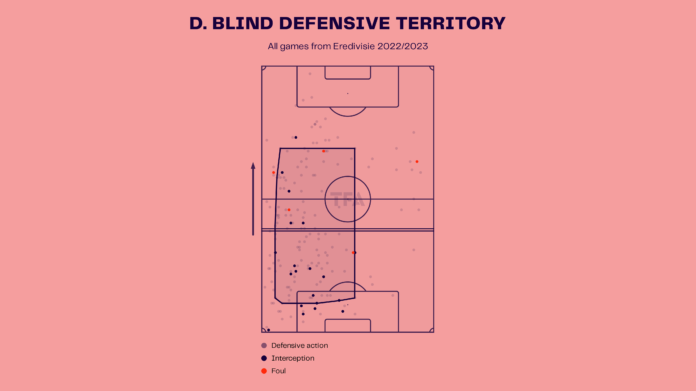 In one of the most shocking moves of the winter transfer window, Bayern Munich have signed Ajax and Netherlands left-back Daley Blind. The 32-year-old’s inclusion would help Bayern cover for the absence of Lucas Hernandez, who got injured during the World Cup.

Daley Blind is a versatile left-back, who can also play as a midfielder. With his ability to combine with other players, find the right pass, overlap and track back, he could add value to an already terrific Bayern side. The Bundesliga defending champions’ first signing of the winter has raised a few eyebrows. But with his experience and incredible football knowledge, Blind could help Bayern in many aspects. Therefore, we look at some of his stats to understand how the experienced Daley Blind could help Bayern Munich in their title defence.

Daley Blind has made 13 appearances for Ajax this season in the Eredivisie, starting 11 matches and coming on as a substitute in two matches. The left-back has two assists to his name in the domestic league and scored and assisted one goal each for the Netherlands in the World Cup as well. 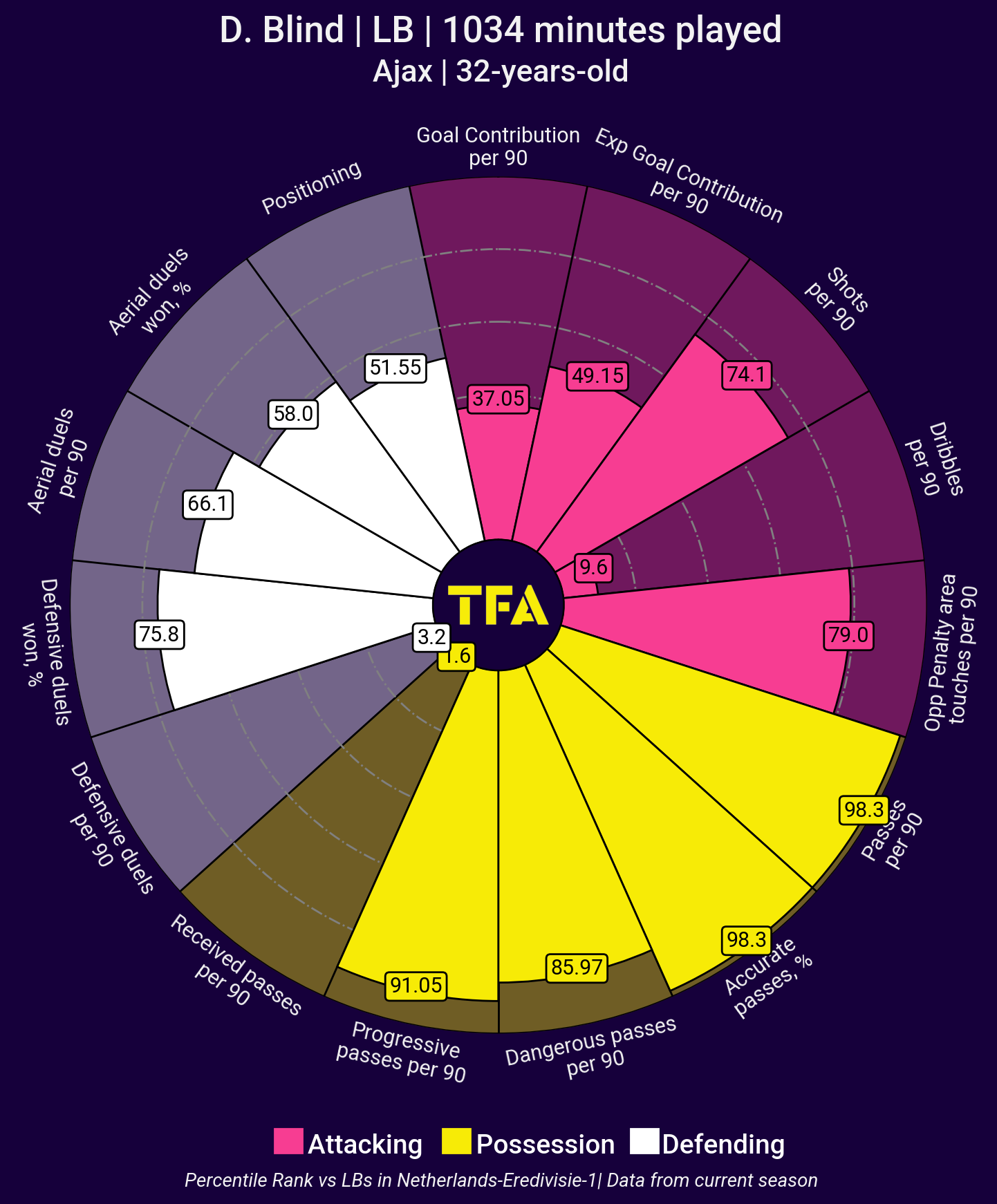 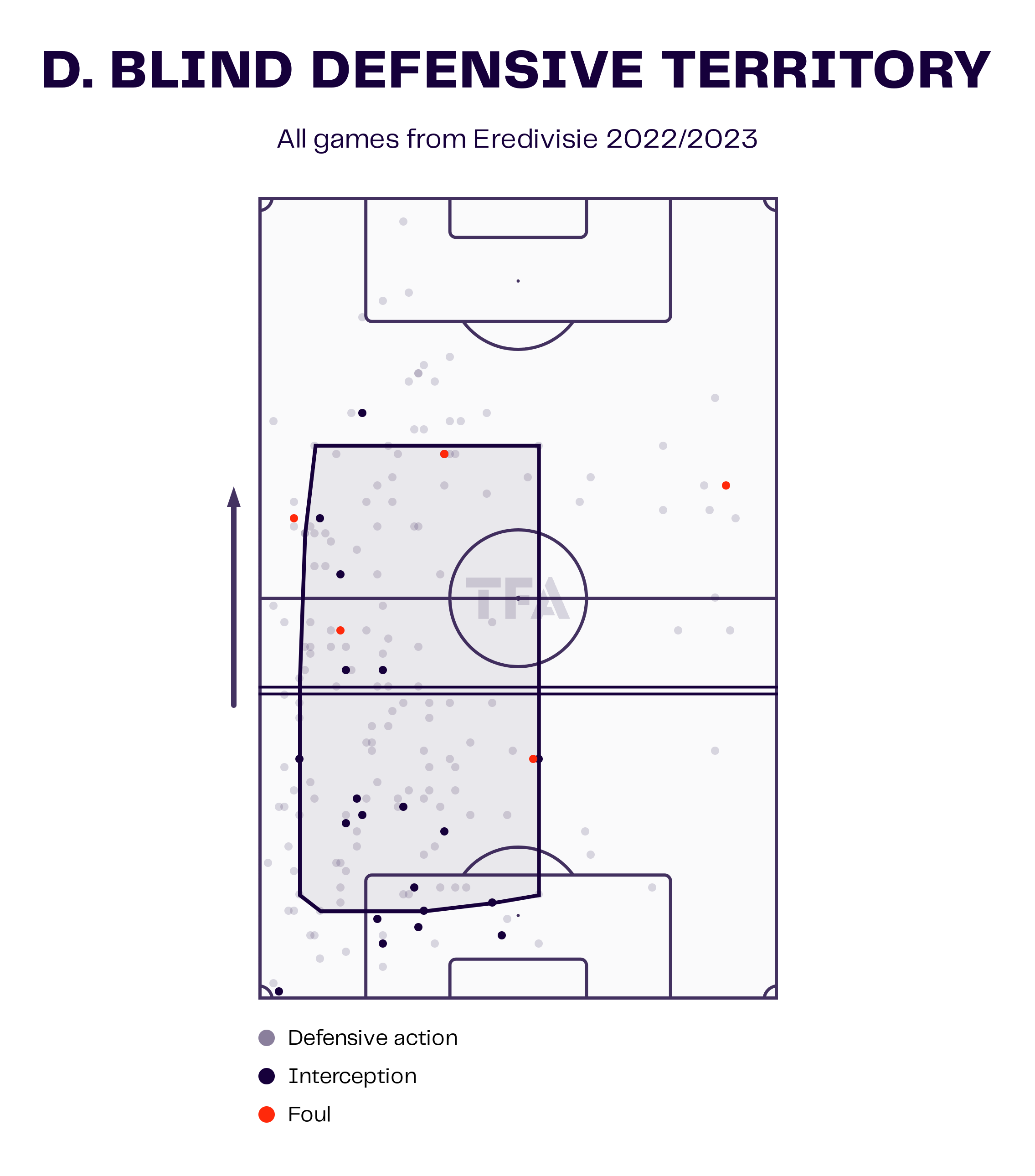 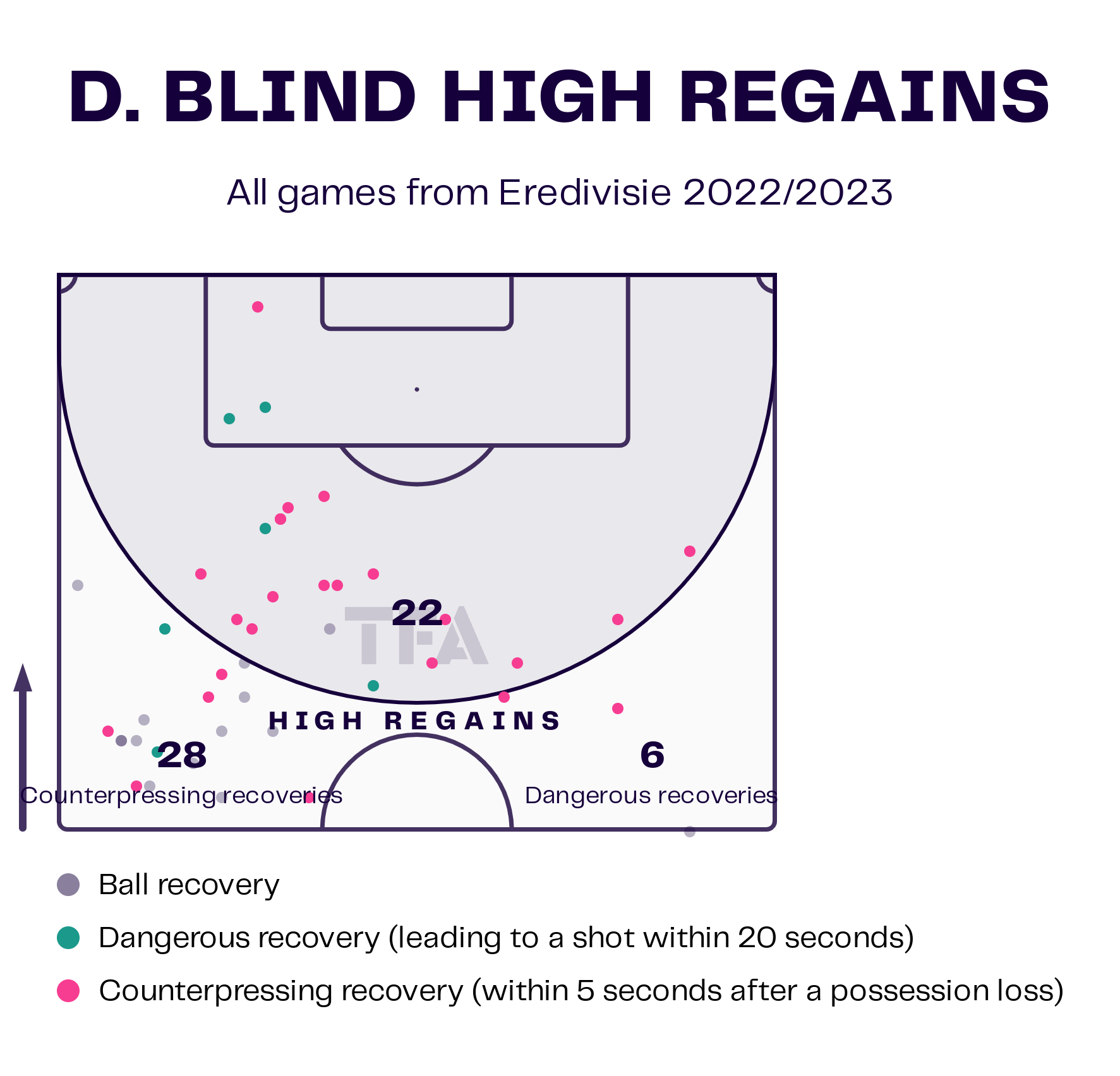 As a part of a club that follows the “Total-Football ideology”, Blind has played a high-pressing game and therefore would gel easily with the Bayern side. He has made many high regains this season for Ajax and these regains could help a side like Bayern, who has many fast players, to launch a quick counter-attack. This season, Blind has made an average of 12.01 recoveries per game with 33.3% of those in the attacking half. 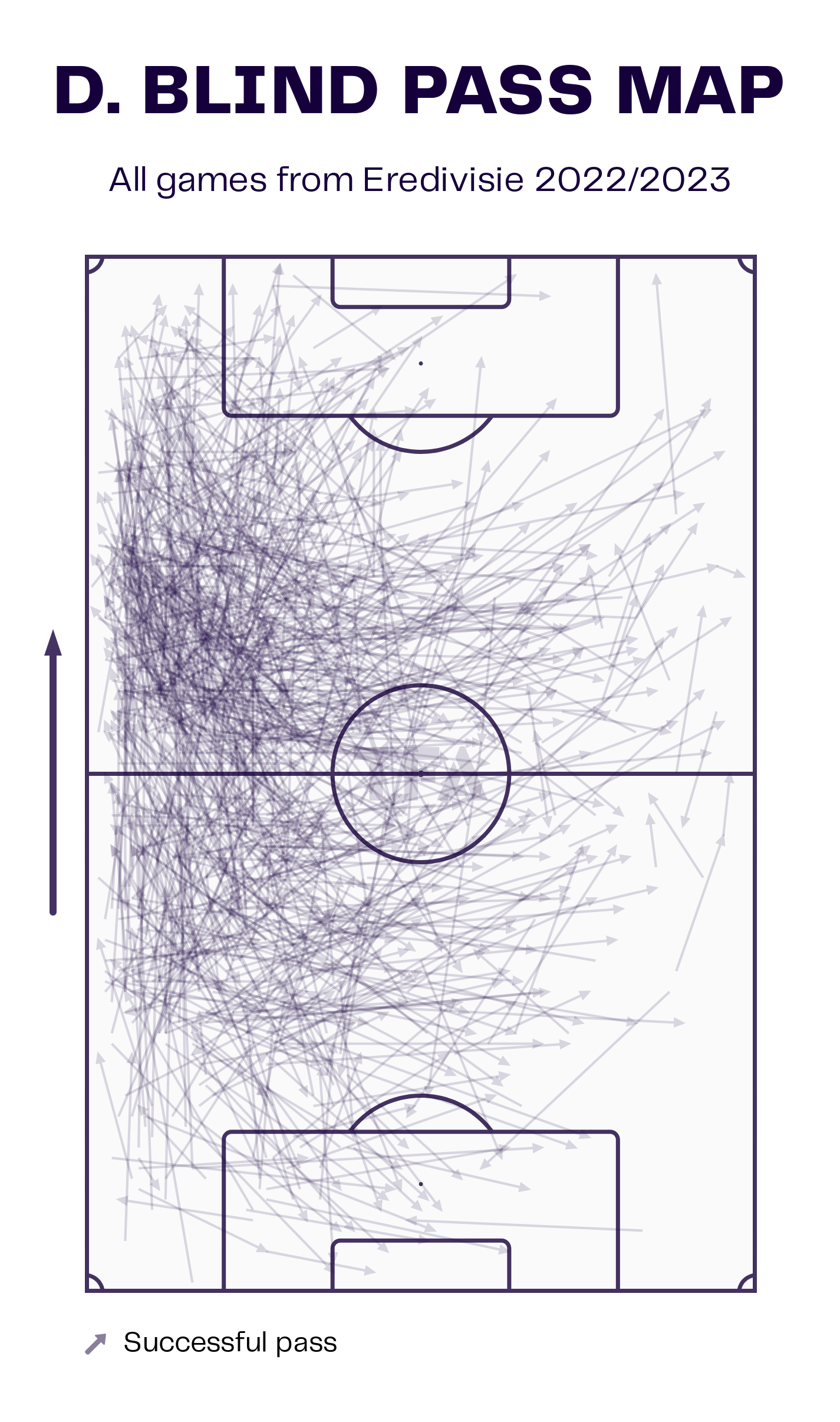 With a passing accuracy of 90.4%, passing is easily one of Blind’s strong suits. He makes around 91 passes per game and is ranked very highly as we can observe from the pizza chart. The above visual shows Blind’s pass map from this season. He dominates the left side by playing a lot of passes into the centre and combining well with his teammates. On top of that, Blind makes around an average of 21.15 passes into the final third, that too with an astonishing 88.2% accuracy. He also plays around 6.01 passes into the penalty box per game. Blind could provide attacking options and could create attacks from nothing using his creativity. 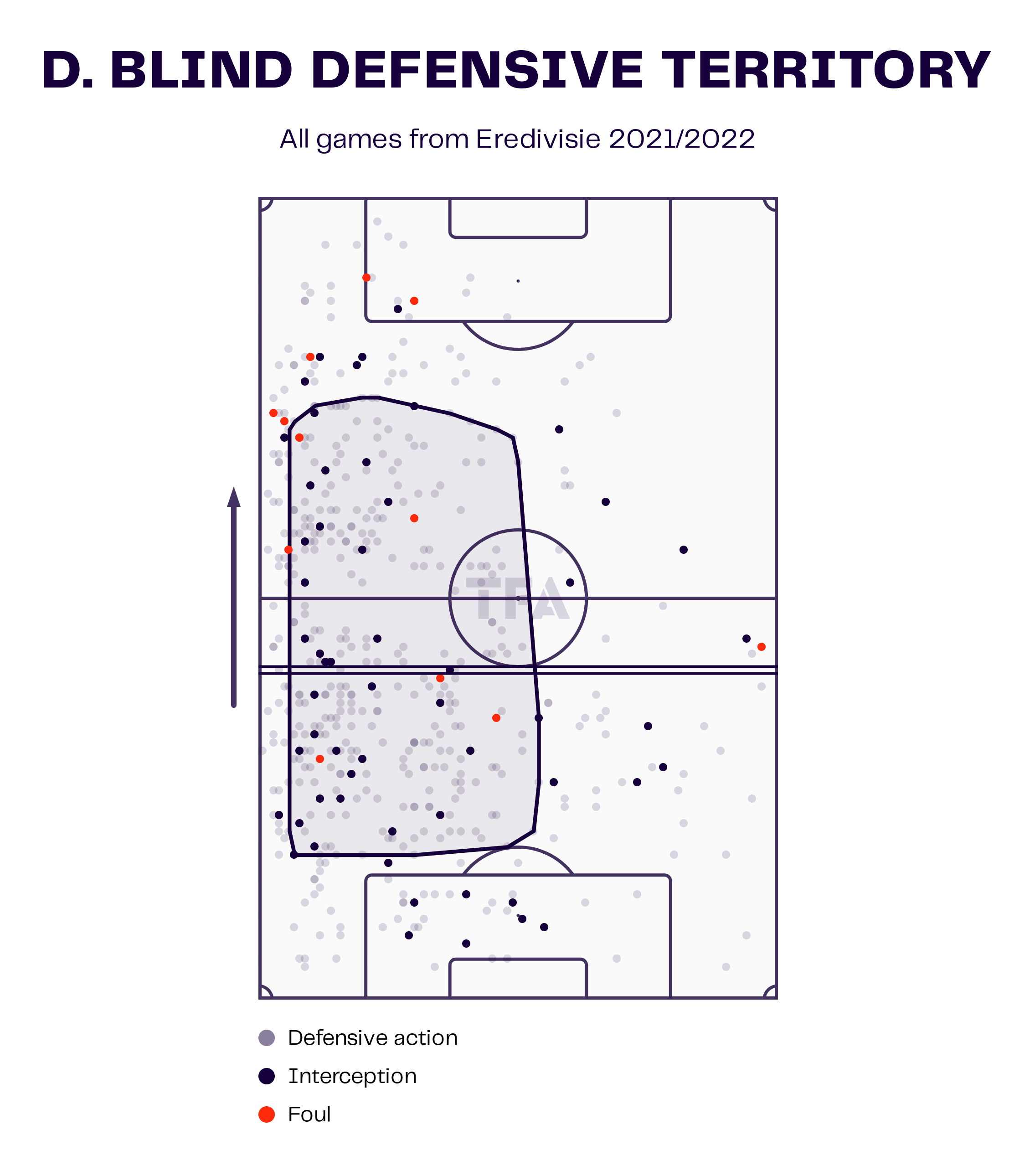 The above visual shows the defensive territory of Daley Blind from the previous season. His defensive stats have dropped a bit this season. Blind made an average of 4.95 defensive duels last season with a success rate of 70.9% and an average of 3.09 aerial duels with a success rate of 48.5%. The number of interceptions made per game has also decreased slightly from 4.32 to four interceptions per game. Blind will have to be defensively strong if he has to maintain his place in the playing eleven.

Can he replace Lucas Hernandez? 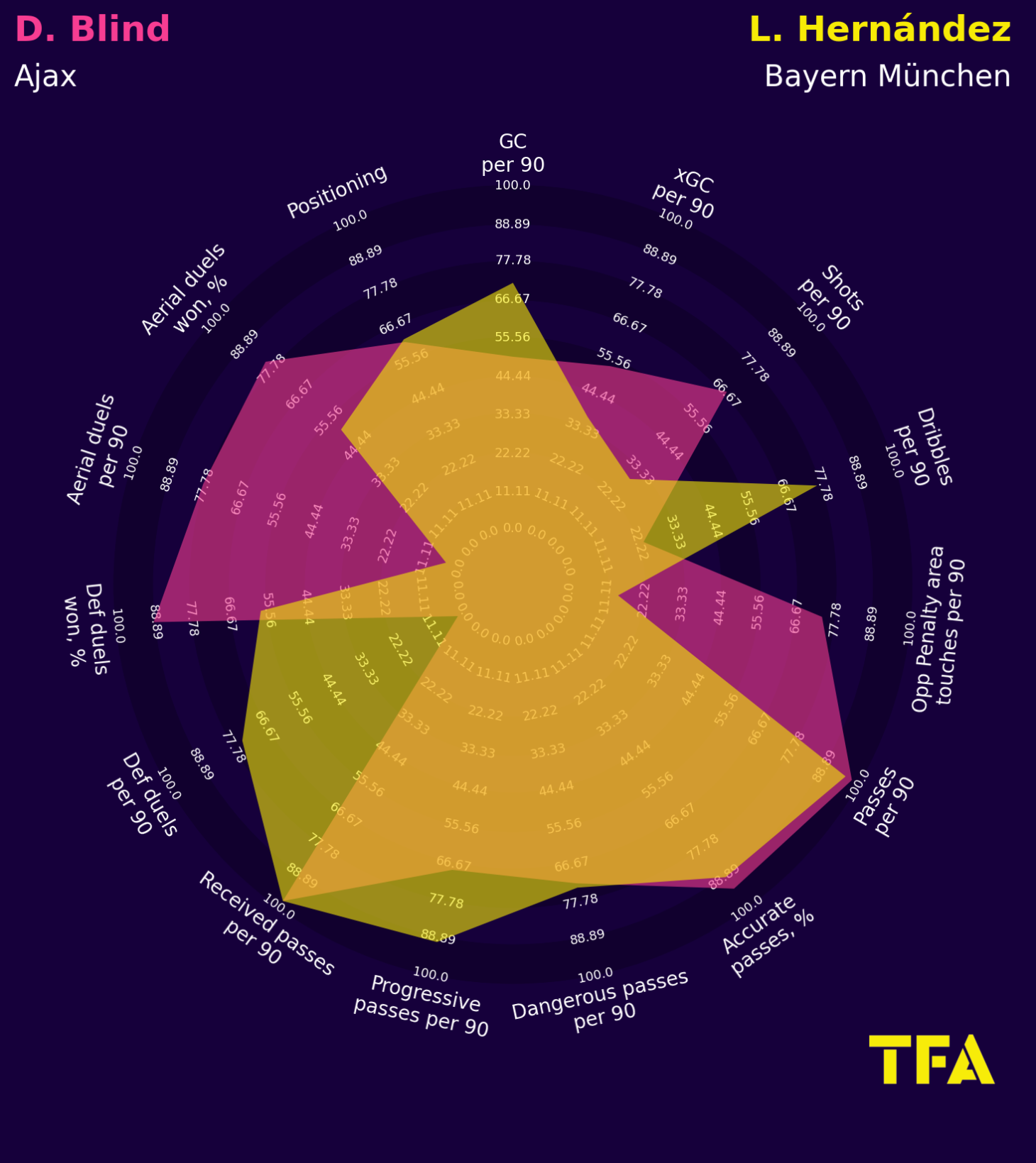 The above visual compares the radars of Daley Blind and Lucas Hernandez. The latter was a big part of Bayern’s backline before he got injured in Qatar. Bayern would be hoping that Blind can cover for Lucas Hernandez. Statistically, Blind has produced better results in defensive duels, aerial duels, shots per game, and passing accuracy while the Frenchman has better stats in goal contributions per game, dribbles, defensive duels and passes received. Blind, at least statistically seems to have all the bases covered.

Since Daley Blind is arriving for an injured, in-form Lucas Hernandez, the impact it could have on the betting markets wouldn’t be that huge. His inclusion could increase Bayern’s 1×2 odds while over/under lines could thrive from the attacking skills he possesses.

Even though Blind is 32 years old, he is still going strong and was a key member of the Netherlands team in the World Cup. His footballing awareness and passing abilities will be helpful for Bayern Munich and they will be hoping that he could continue his form from the World Cup into the Bundesliga as well.