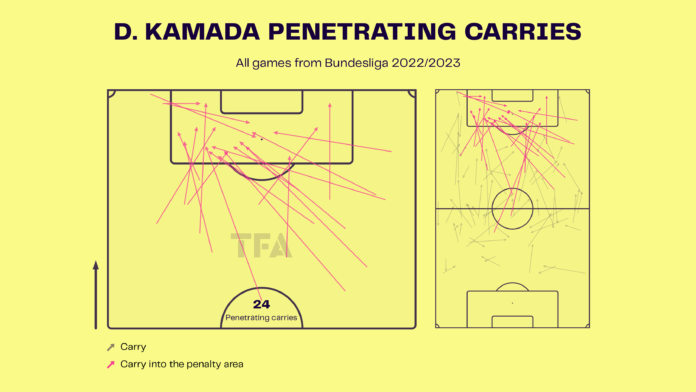 Japanese youngster Daichi Kamada joined Eintracht Frankfurt in the summer of 2017. He has produced glimpses of magic throughout his time at the club. But this year, he finally seems to be on the way to becoming the player everyone expected him to be. Kamada has seven goals and three assists to his name in the current season of the Bundesliga. His stellar season has earned him a place in the Japanese team for the World Cup. The 26-year-old midfielder is an important piece of the puzzle for Frankfurt and has helped his team climb to fourth place in the table.

We look at some stats to understand how Daichi Kamada is having the best season of his career.

Daichi Kamada has played 13 matches this season, starting 11 and coming off the bench in two. He has seven goals and three assists in the Bundesliga. The Japanese midfielder has scored three times in the UEFA Champions League and twice in the DFB Pokal. His best season so far was the 2020/21 season, when he scored five goals and had 12 assists to his name. But this season, Kamada seems to have found his finishing boots, as he already has more goals than he did that season. 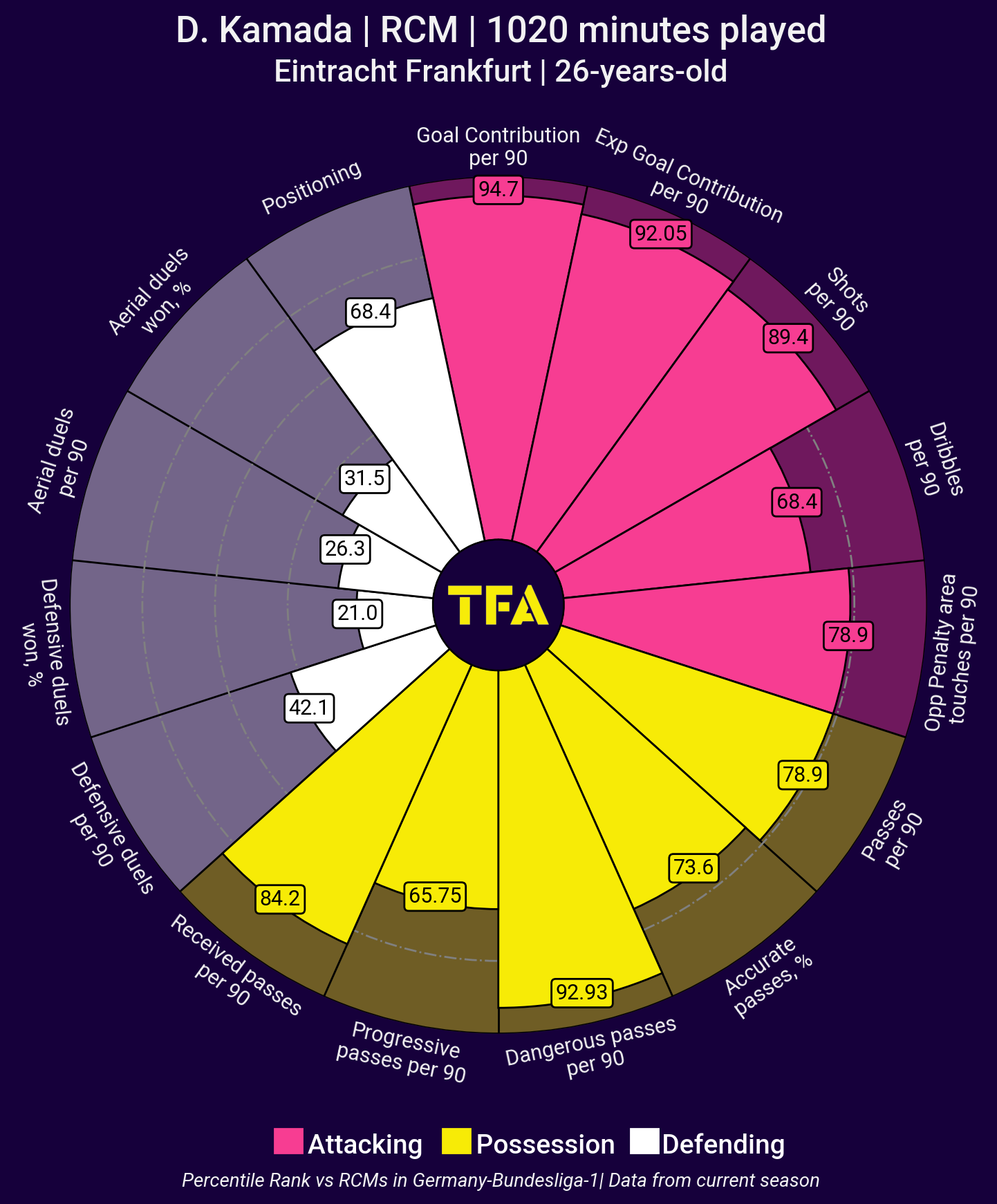 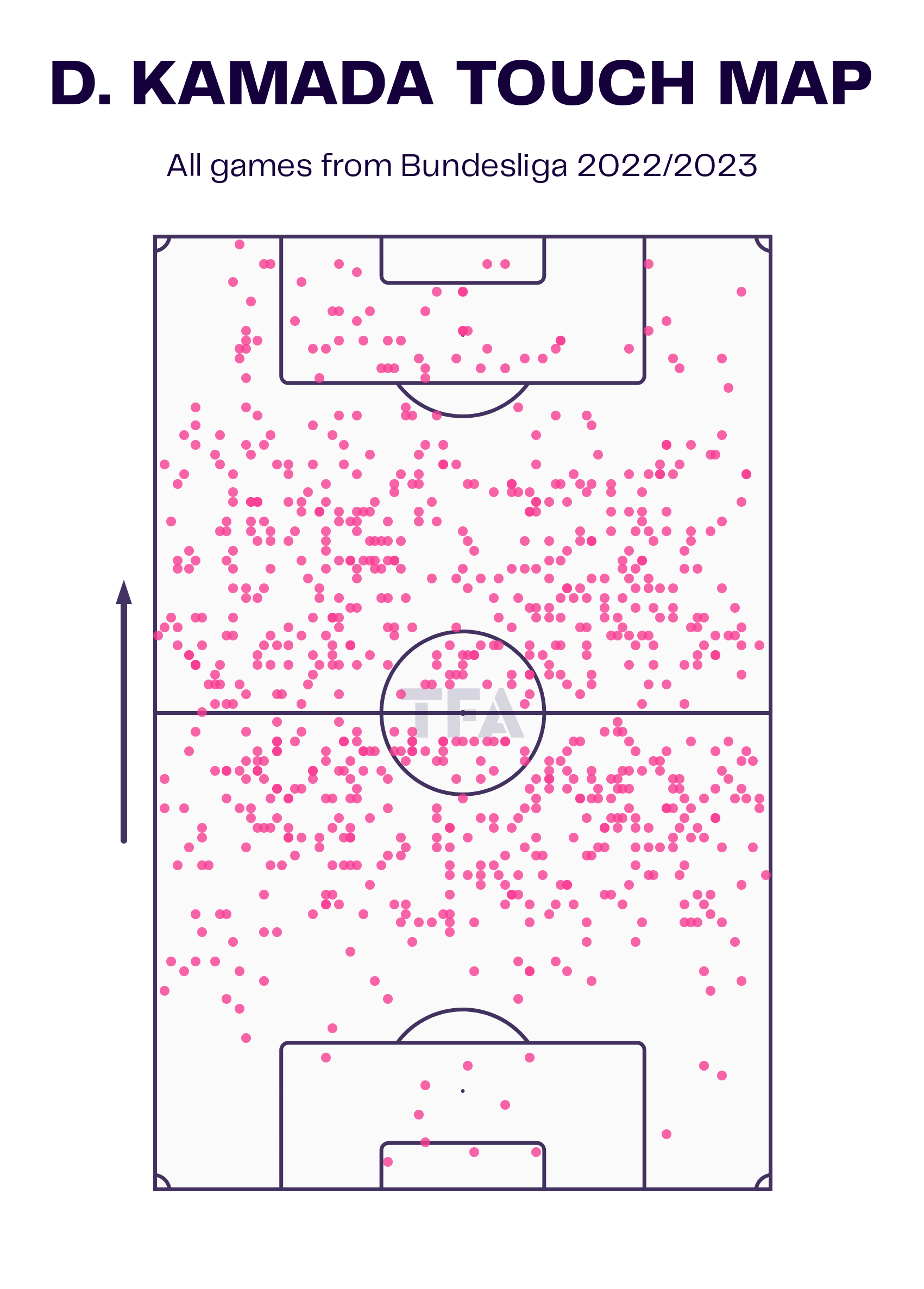 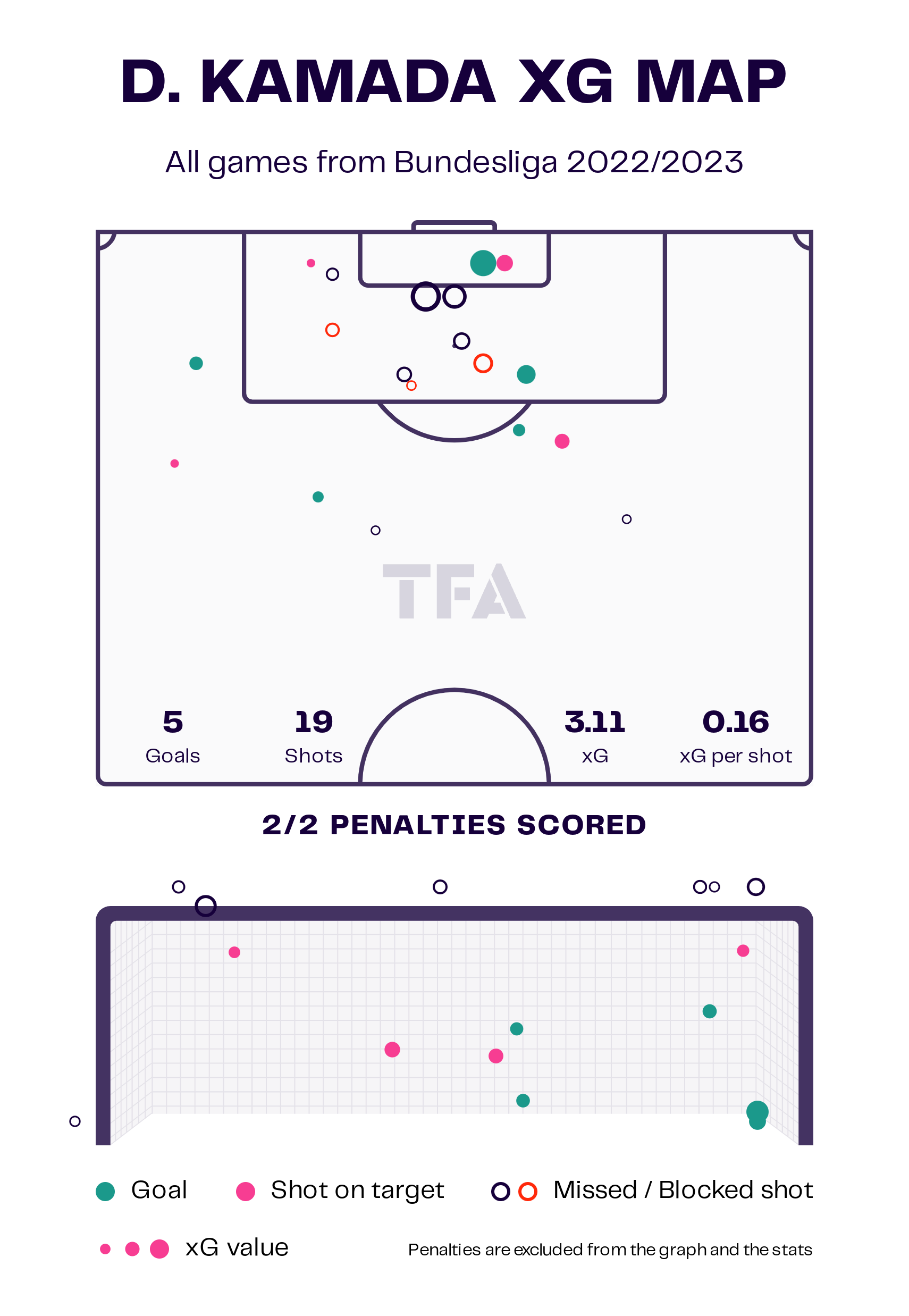 The first viz shows the touch map of Daichi Kamada in the Bundesliga this season. He plays both as a winger and a central midfielder. We can observe from the viz that Kamada likes to make the most of the width of the field. He uses his dribbling skills to go past players and enters the opposition’s penalty area quite often. Kamada averages two touches in the penalty box per 90 minutes and is dangerous in front of the goal. Kamada had an average of three touches per game by the end of the 2020/21 season.

The second viz shows the xG map of Daichi Kamada this season. He has scored five goals from open play and two from spot kicks, too. The Japanese international has tried 19 shots, with 12 of them coming from inside the penalty box. Of these shots, nine were on target, and Kamada converted five of them. 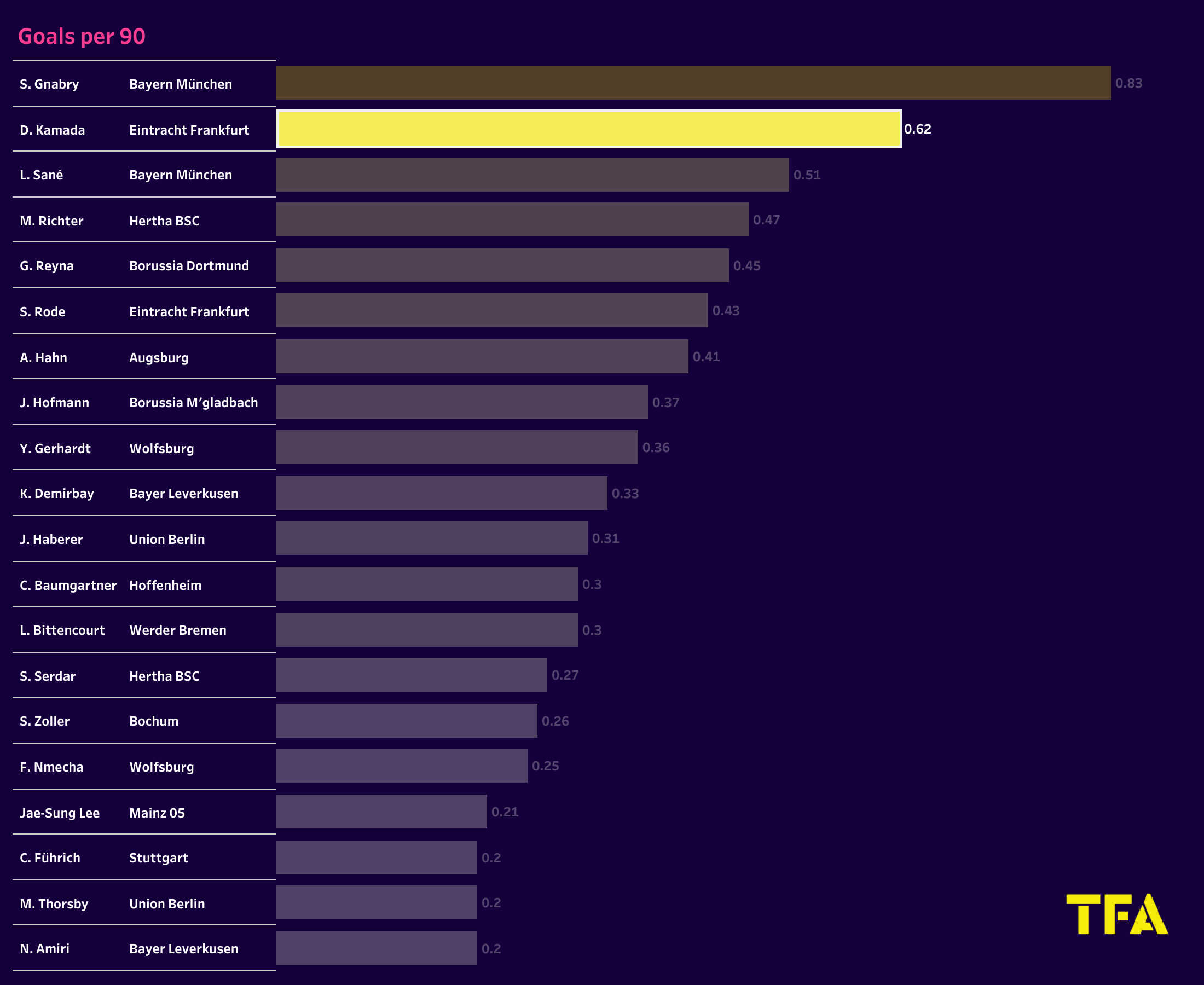 The above viz shows the goals per 90 minutes of Daichi Kamada. He has the second-best record in the league for goals per game and scores an average of 0.62 goals per game. He attempts an average of 1.85 shots per game, with 52.4% of them on target. This is an improvement from his previous best season. He had an average of 1.42 shots per game in the 2020/21 season. This season, the Japanese international looks more confident in taking the shots, and it has paid off for him so far. His presence in the final third was crucial for Eintracht Frankfurt this season, as they racked up a total of 32 goals. 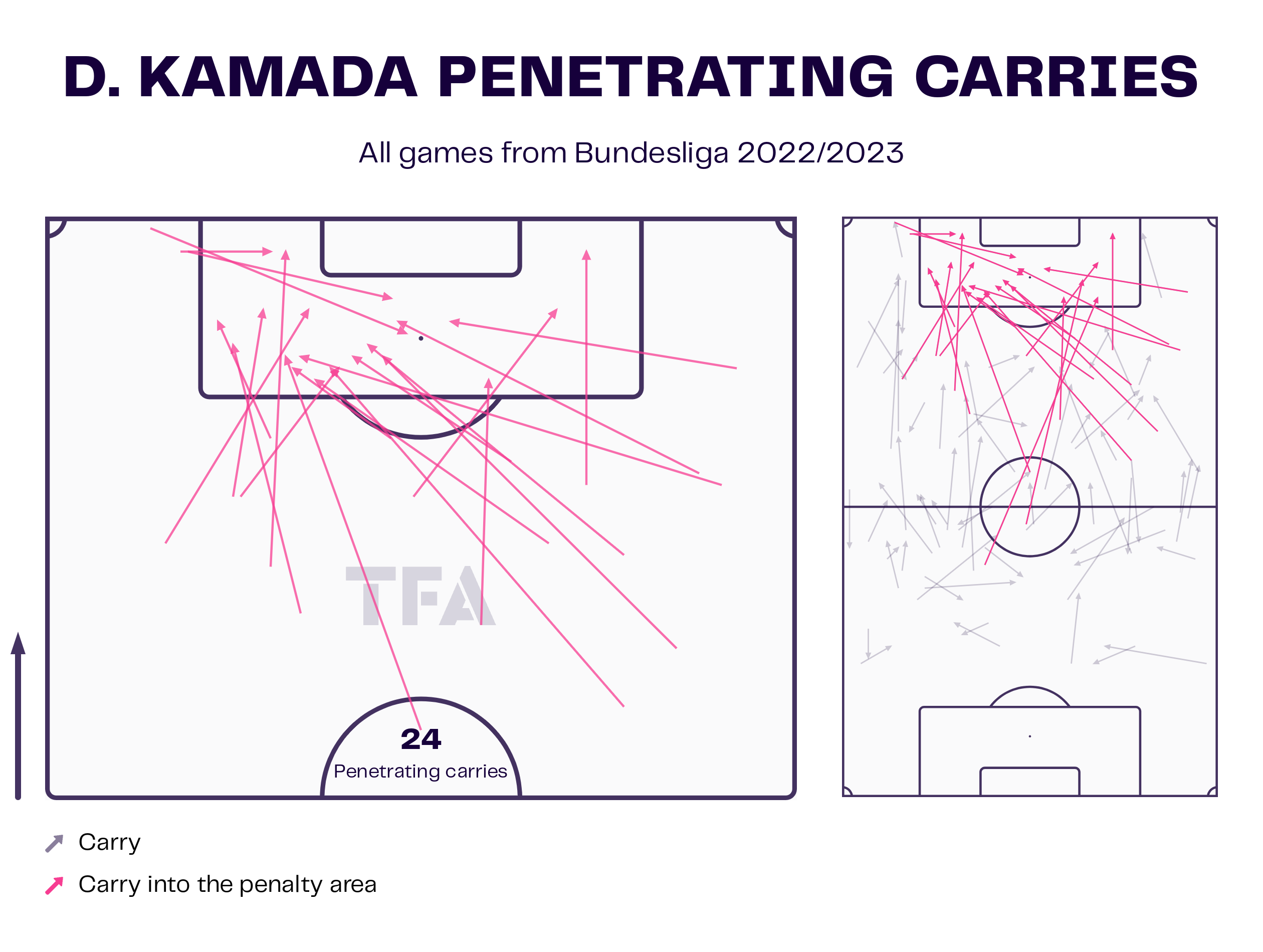 The above viz shows the penetrating carries of Daichi Kamada in the Bundesliga this season. We can see from the viz that he can dribble the ball long distances and has done so on many occasions. He averages 2.74 dribbles per game with 48.4% success. The Japanese International also makes an average of 1.32 progressive runs per game. This, however, is a drop from 4.01 dribbles per game in the 20/21 season. 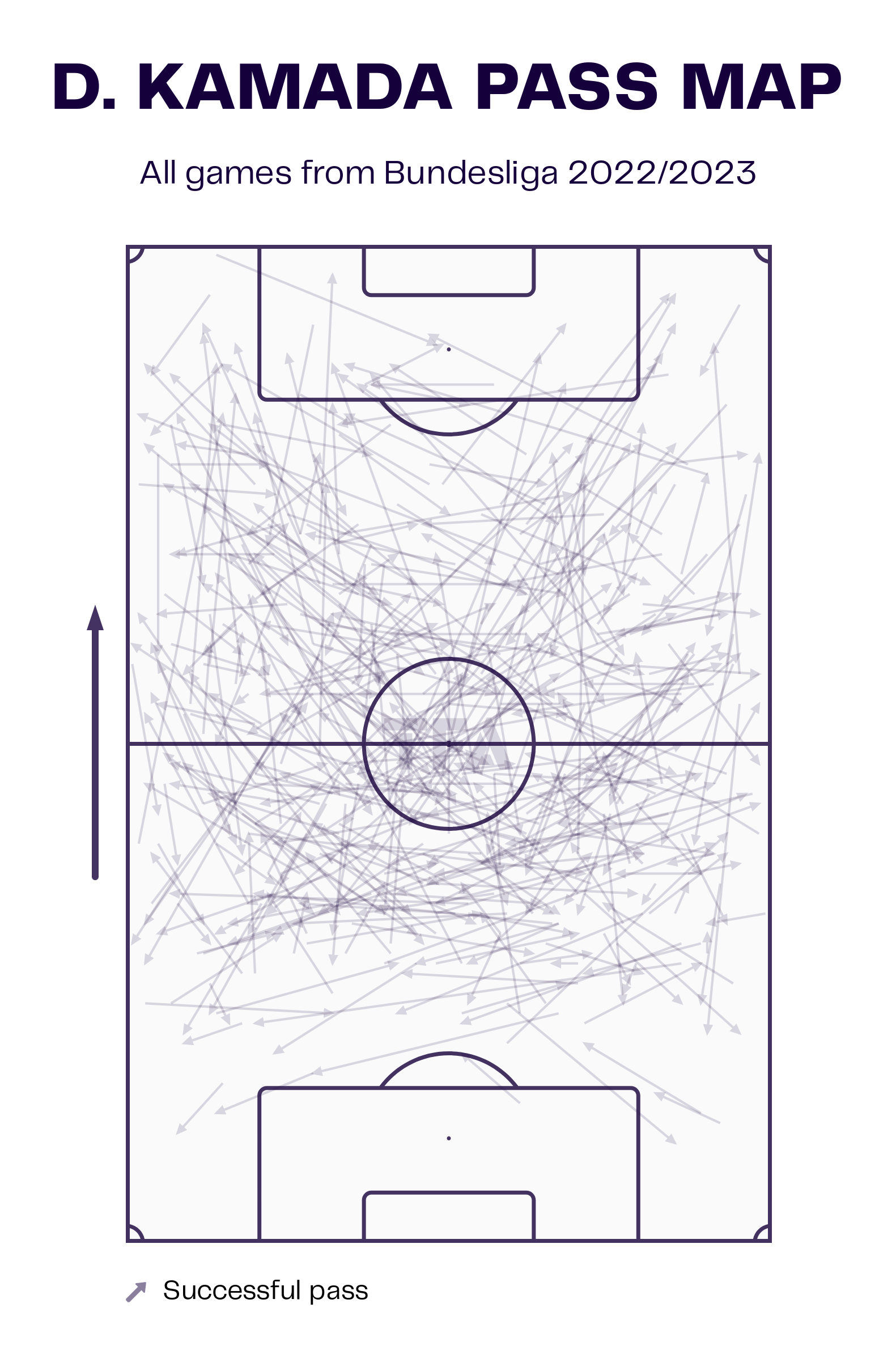 The above viz shows the pass map of Daichi Kamada in the Bundesliga. He has an excellent passing stat and a passing accuracy of 85%. We can observe from the pass map that he plays a lot of passes into the attacking third. Kamada also makes around two passes into the penalty box per game. He is a clever player and switches the play when needed. The 26-year-old averages 2.91 long passes per game and has a 57.6% accuracy rate. 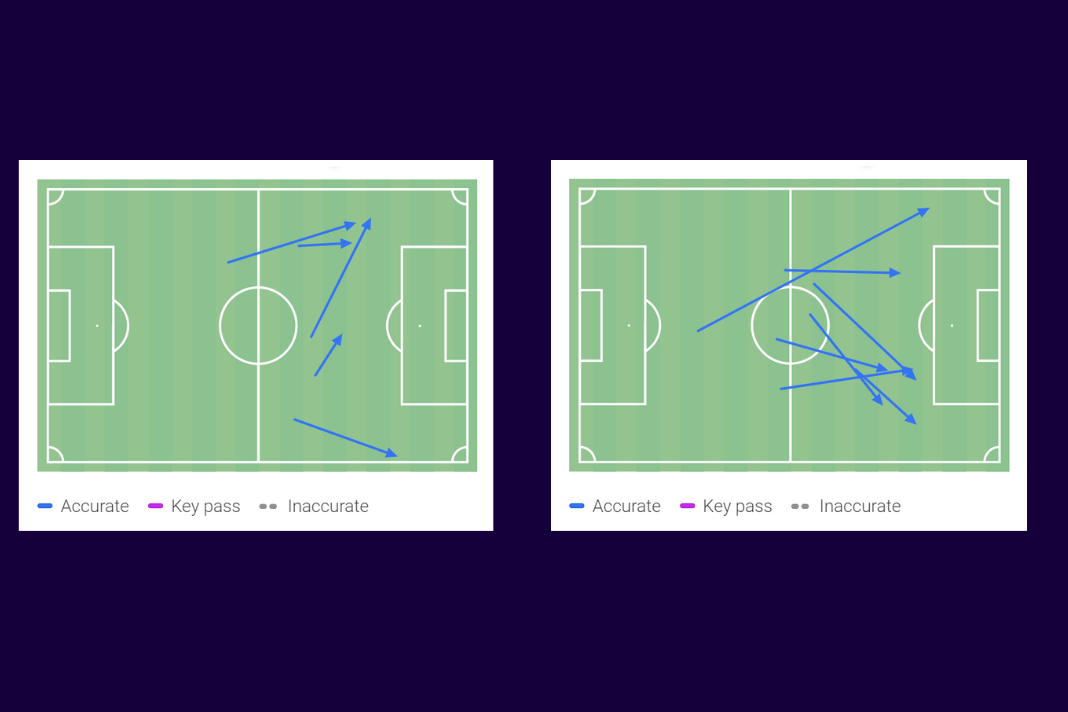 Daichi Kamada has been a powerful presence at the front line for Eintracht Frankfurt and is their top scorer this season. He has scored 12 goals across all competitions and has four assists to his name as well. Eintracht Frankfurt manager Oliver Glasner will be hoping that he will continue his great run of form when the season resumes next year.

The Data Zone: Denmark lose in extra time away to England

Match Preview: Augsburg have no hope against Bayern Munich on Friday

Under the microscope: Stats behind Union Berlin’s impressive start to the...