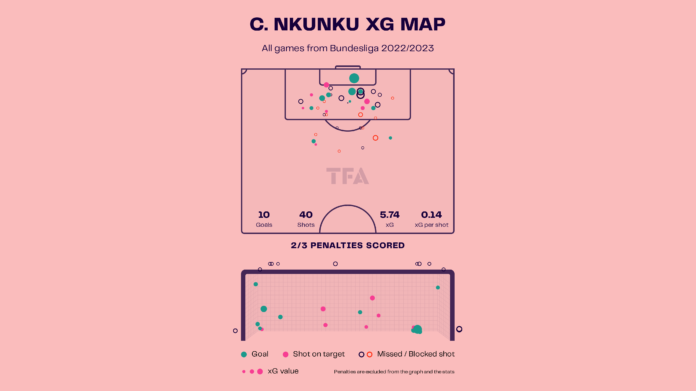 Christopher Nkunku is having a dream season with RB Leipzig and is currently the top goal scorer in the Bundesliga with 12 goals from 15 appearances. The Frenchman has helped his team climb up to the third position in the table with 28 points from 15 matches. His fantastic performances have drawn interest from big clubs like Chelsea. The 25-year-old has been named in the France squad for the World Cup and looks ready to take on the world with his dazzling feet.

We take a look at some stats of Christopher Nkunku to decode his brilliant start to the season. 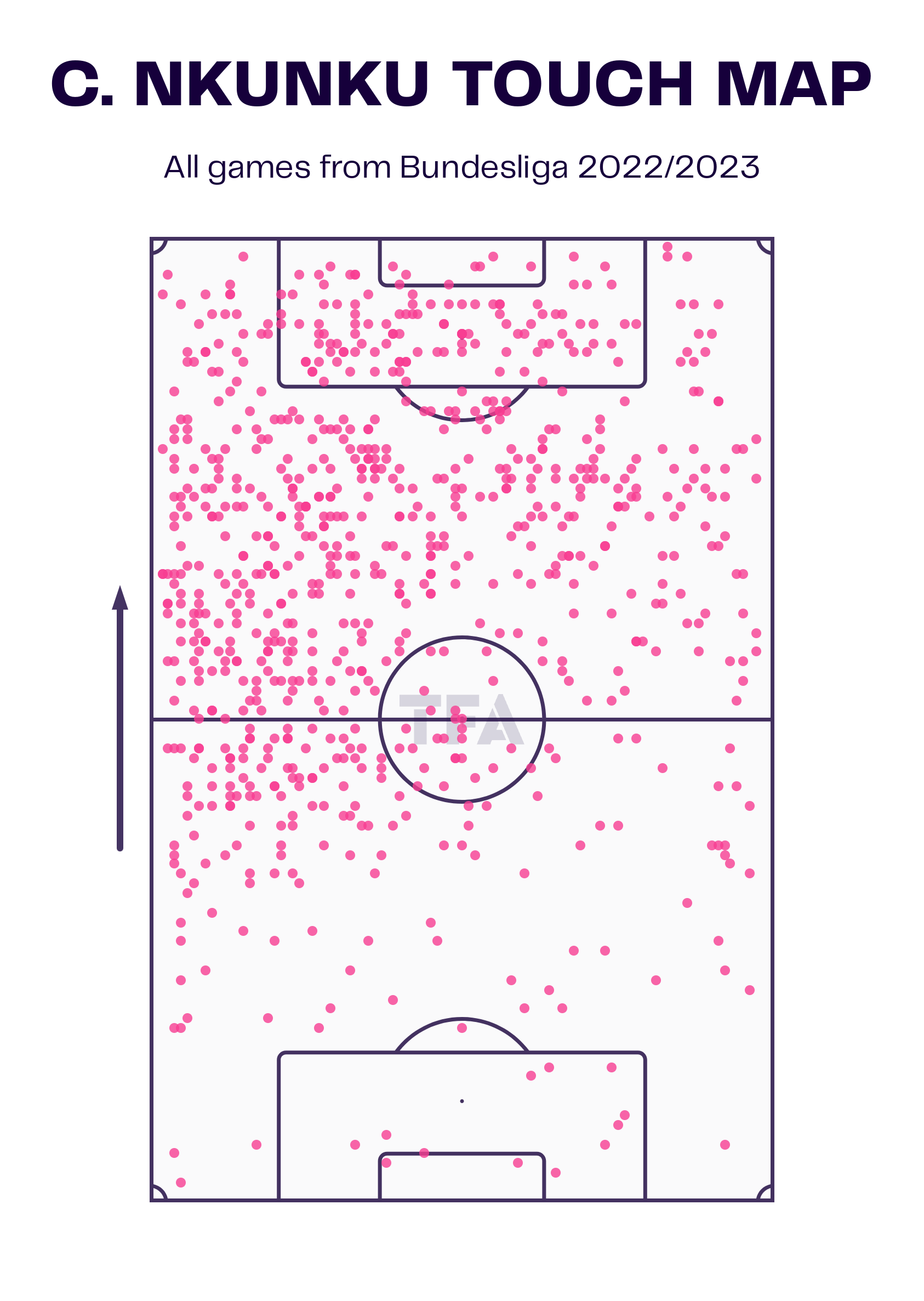 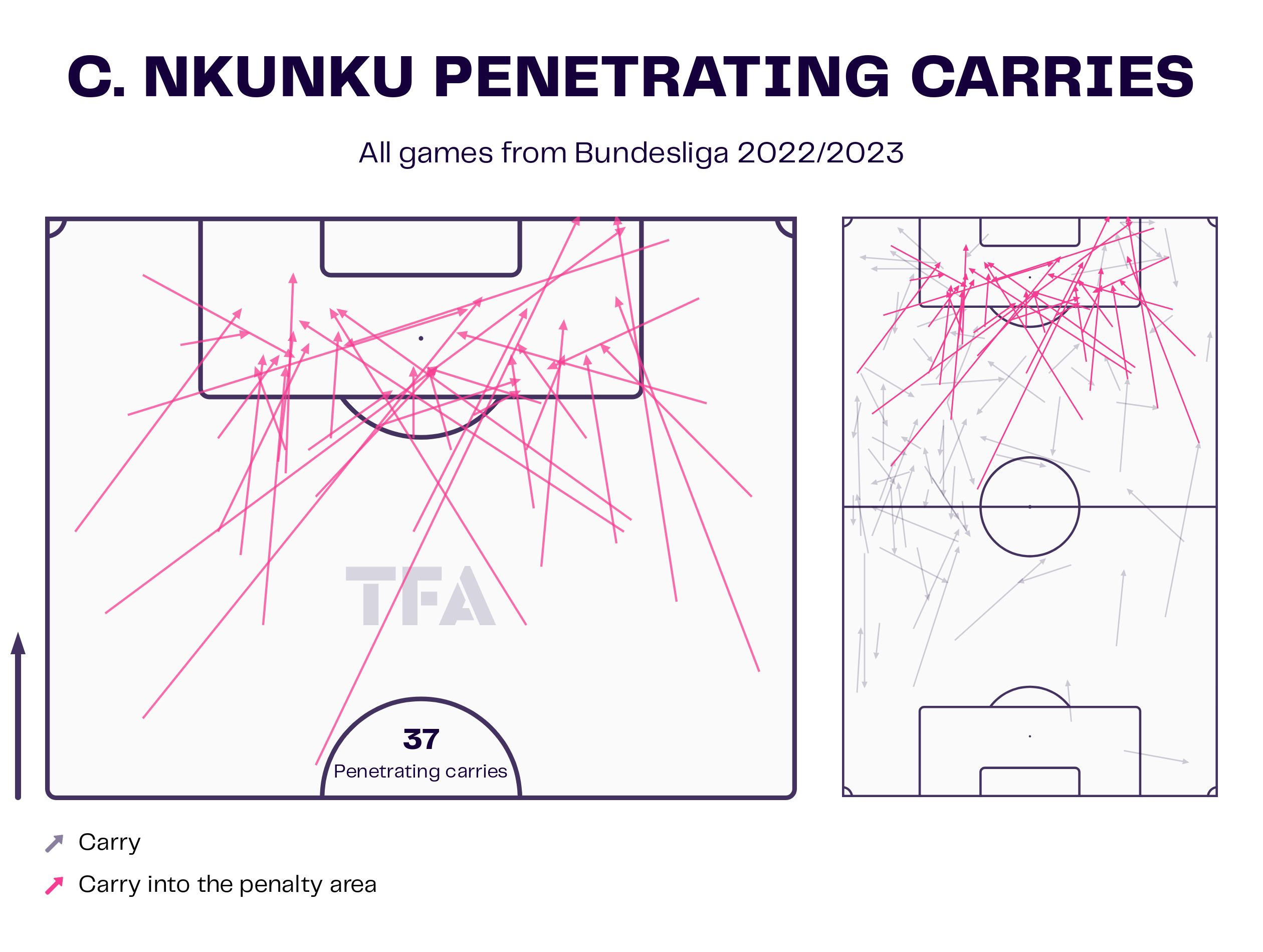 The first viz shows the touch map of Christopher Nkunku this season in the Bundesliga. It is clear from the touch map that Nkunku likes to use the full width of the pitch. Nkunku, who usually plays as a centre forward or attacking midfielder, uses his speed and dancing feet to get past opposing players. He spends the majority of his time in the attacking third and averages 4.7 touches per game in the penalty box.

The second viz shows the penetrating carries of Nkunku. His dribbling skills are second to none, and his control over the ball is a delight to the eyes as well. Nkunku’s strong physique has also helped him dribble the ball for long distances, as we can observe in the second visual. The 25-year-old uses the width of the ground to good use as he cuts inside and runs past challenges with the ball glued to his feet to make those penetrating carries. 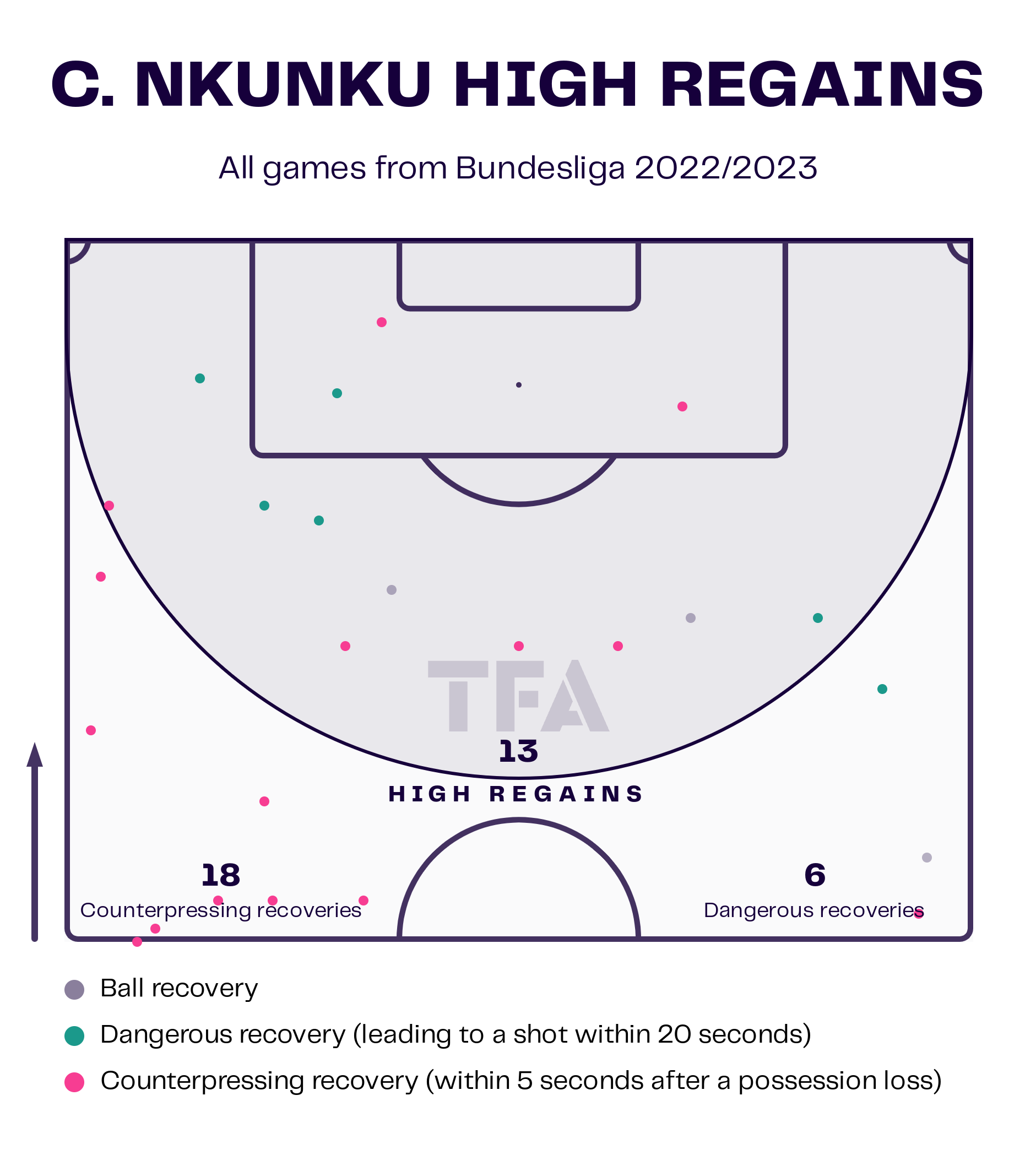 Marco Rose has implemented a high press system at Leipzig, and Christopher Nkunku is its commander-in-chief. He leads the pressing from forward and wins the ball back in dangerous areas, which helps the team attack from dangerous positions. Nkunku makes an average of 3.9 recoveries per 90 minutes, with 60.4% of these in the attacking half. 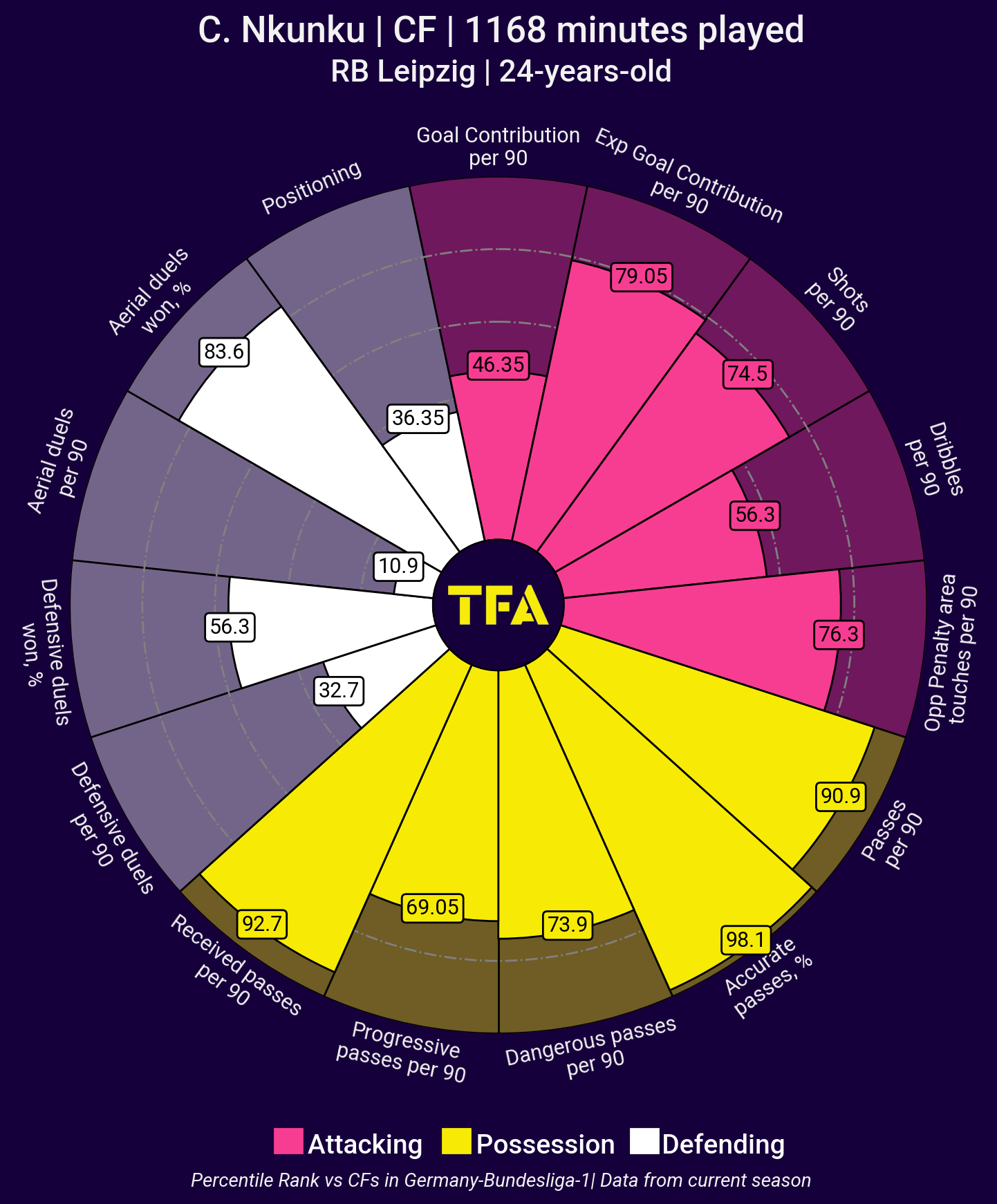 The above viz shows the percentile rank of Christopher Nkunku compared to other centre-forwards in the Bundesliga. He is ranked in the top 98.1 percentile for accurate passing and the top 92.7 percentile in passes received, showing how he is the focal point of the team. He is also ranked above average for shots per game and touches in the opponent’s penalty box as well. Another area where Nkunku has shined is winning aerial duels. 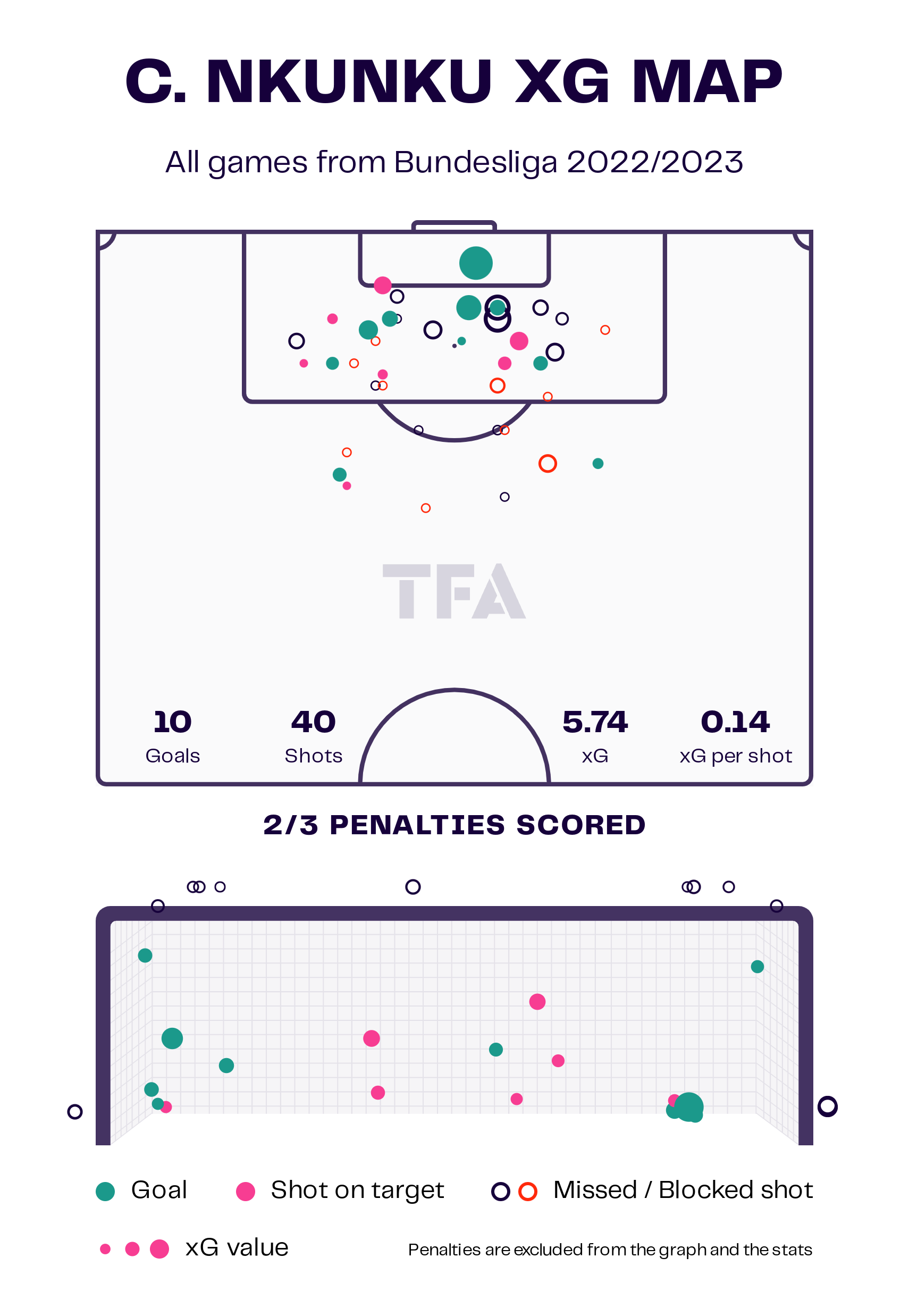 The 25-year-old is the current top scorer in the Bundesliga this season and has scored 12 goals in 15 appearances. He has scored all kinds of goals, from headers to free kicks. He averages 2.85 shots per 90 minutes and has a 44.2% accuracy rate.Nkunku has tried 40 shots, with 17 of them on target, and has scored from two spot kicks as well. He scored 20 goals in the Bundesliga last season. This season, he has crossed the halfway mark at the midseason break.

Christopher Nkunku has taken Leipzig to the third position in the Bundesliga table with his tally of goals. The player looks ready to take on the world stage with his staggering form as he travels to Qatar to represent France. Marco Rose will be hoping that his goalscoring machine returns without any injuries to keep the momentum going for RB Leipzig.

Under the microscope: How Eintracht Frankfurt is becoming a big fish...