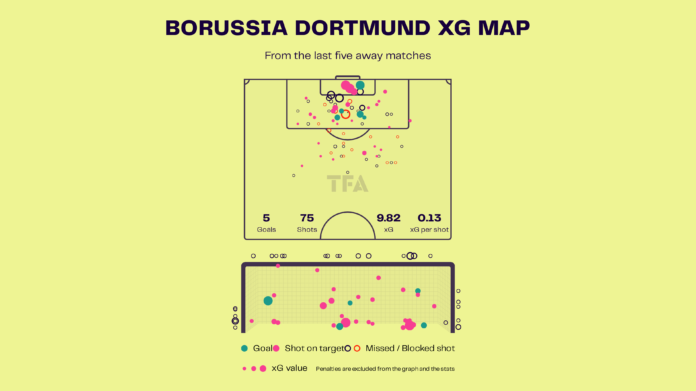 Borussia Dortmund is having a mixed season and is sitting in the sixth position in the Bundesliga with 25 points from 15 matches. They have won eight matches, drawn one, and lost six. Out of the six losses, five were in away matches. Dortmund have a poor away record this season, with just three wins and five losses from eight matches. This poor form away from home is adding salt to their wound. They are already struggling with star players injured and some important players linked away from Signal Iduna park. Therefore, we look at their stats in the away fixtures to understand how it is hurting them. 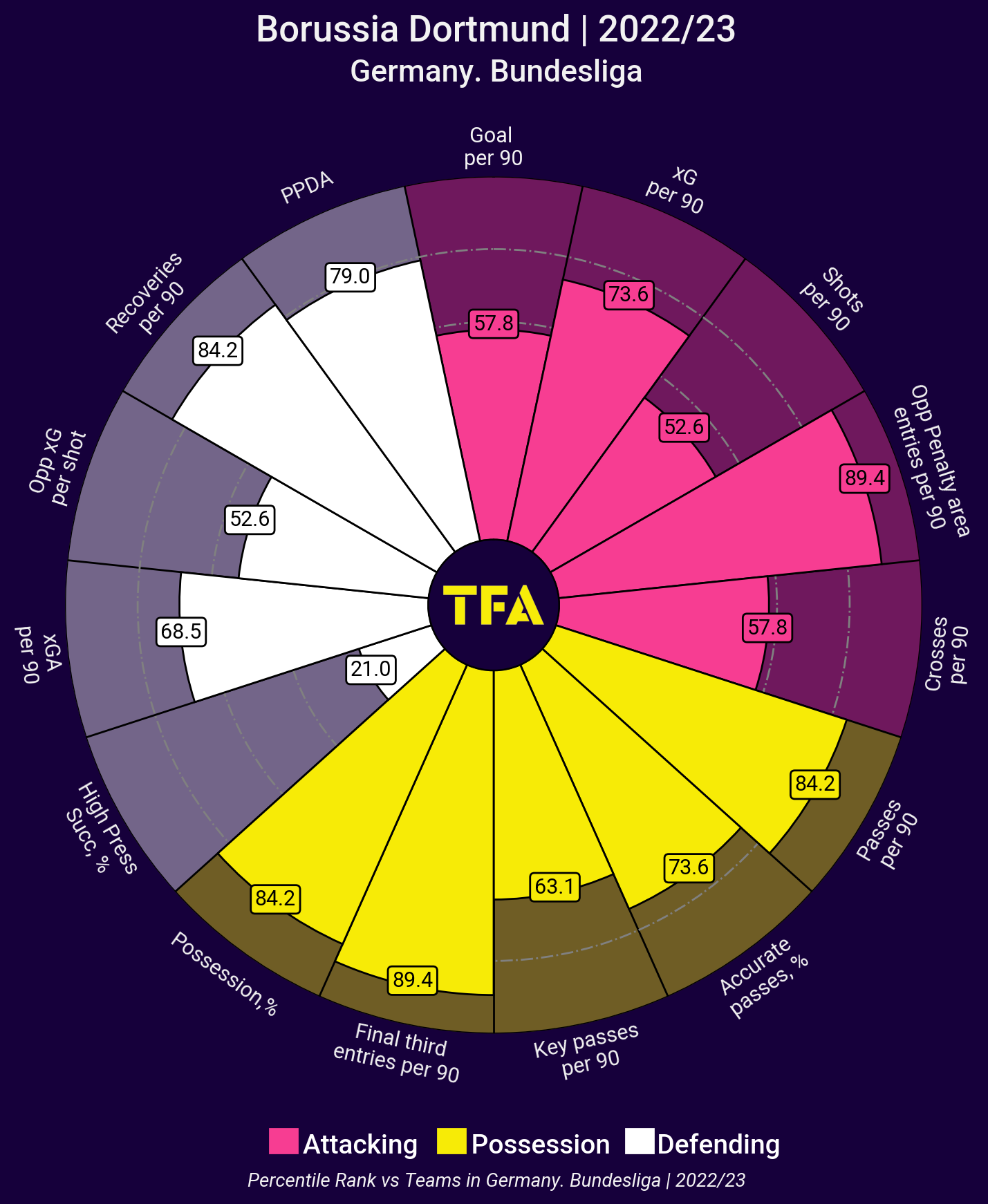 The above visual shows the percentile rank of Borussia Dortmund compared to other teams in the Bundesliga. We can observe that they have good stats in all departments. They are ranked in the top 89.4 percentile for entry into the opposition penalty area and the top 57.8 percentile for goals per 90 minutes. They have good stats in passing as well, where they are ranked highly for passes per game and passing accuracy. Another area where they have done well is in recoveries per game. They are ranked in the top 84.2 percentile for recoveries per 90 minutes. High pressing is something Dortmund have not done well this season and is ranked very low. 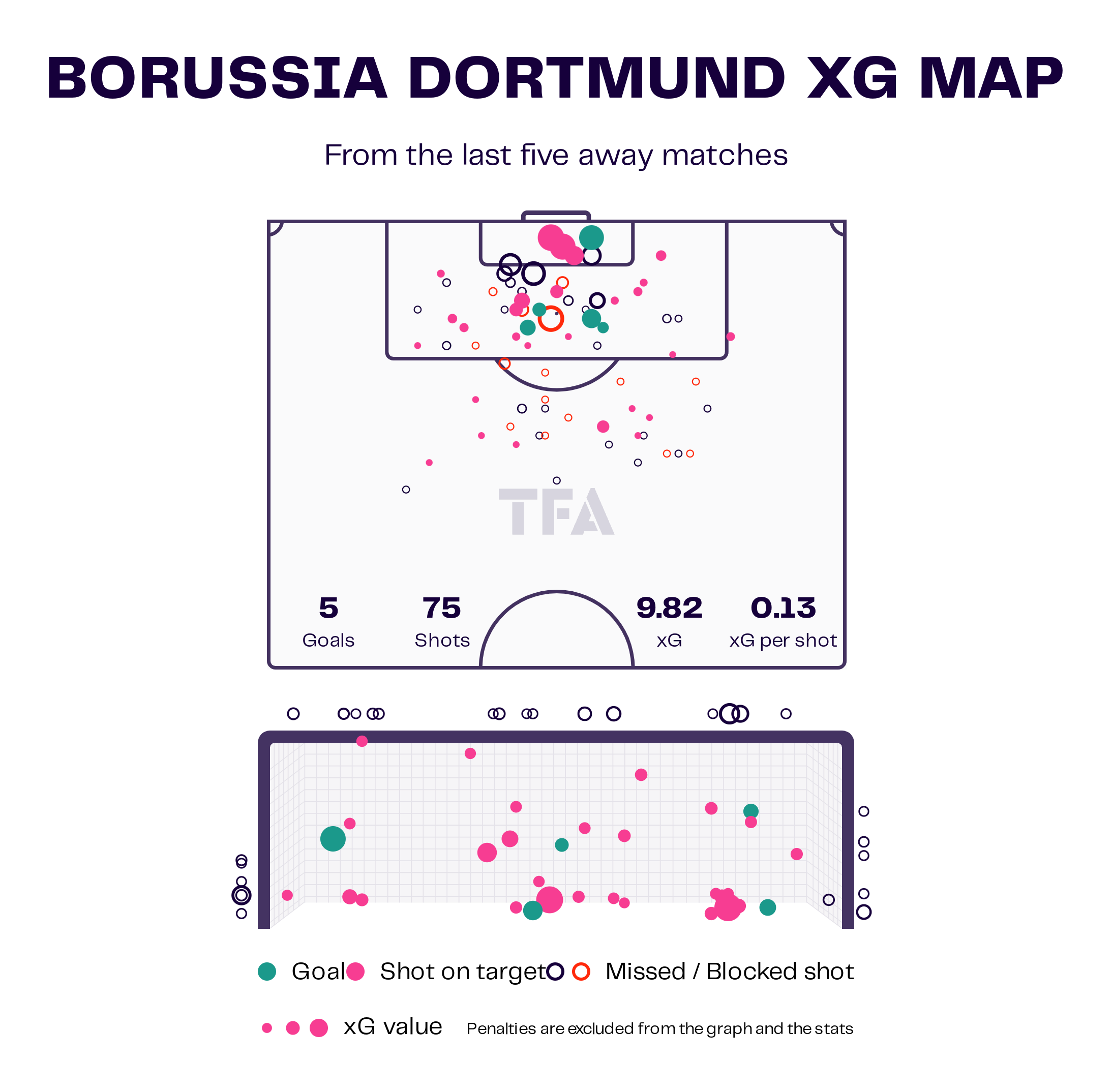 The above visual shows the xG map of Borussia Dortmund from the last five away matches. They have only scored five goals and have conceded seven goals. They have attempted 75 shots, with 32 of them on target. But out of the 32, they have only managed to convert five goals. The absence of an established goal scorer is hurting Dortmund. Their inefficiency in front of the goal has come back to haunt them when they concede goals and fail to take away points. They had an xG rate of 9.82 but managed to score only five goals, which shows the inaccuracy in shooting.

The image above depicts the shots made by Dortmund players during their match against Borussia Monchengladbach. They attempted 19 shots, with ten on target. Nico Schlotterbeck and Julian Brandt managed to find the back of the net, but the others couldn’t finish the chances they got. They had an xG rate of 4.05 in the match but not only scored two goals but ended up conceding four too. 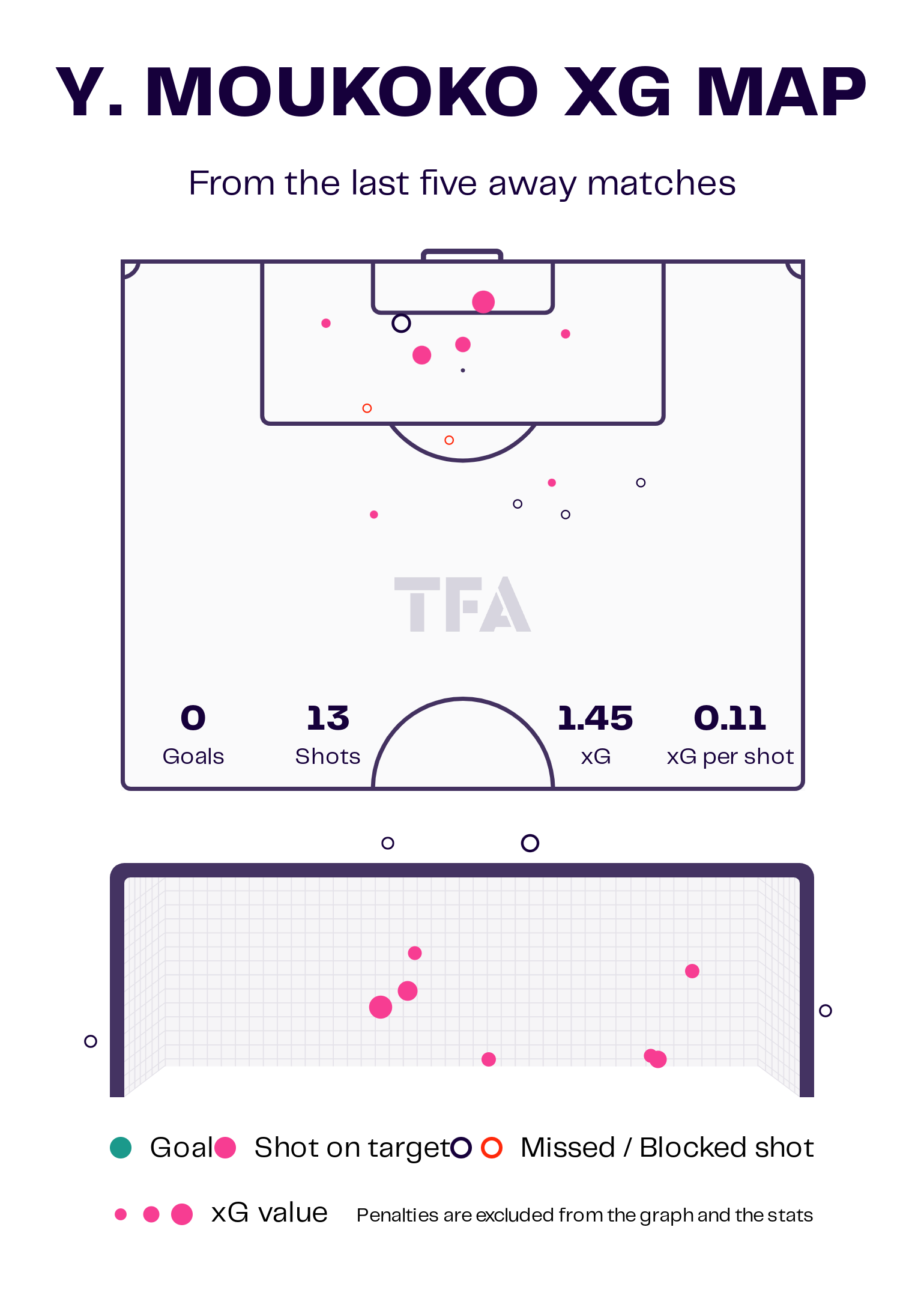 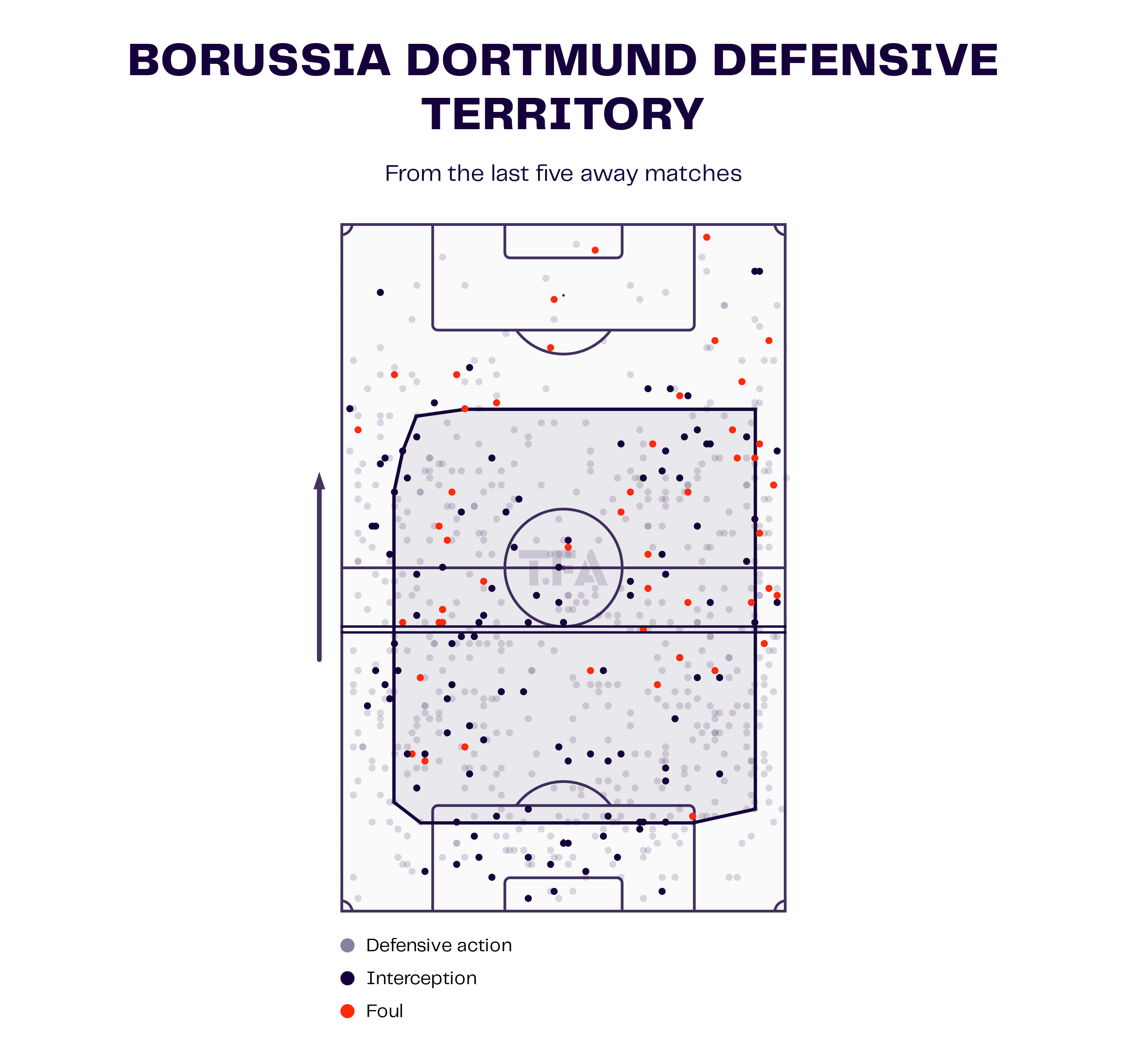 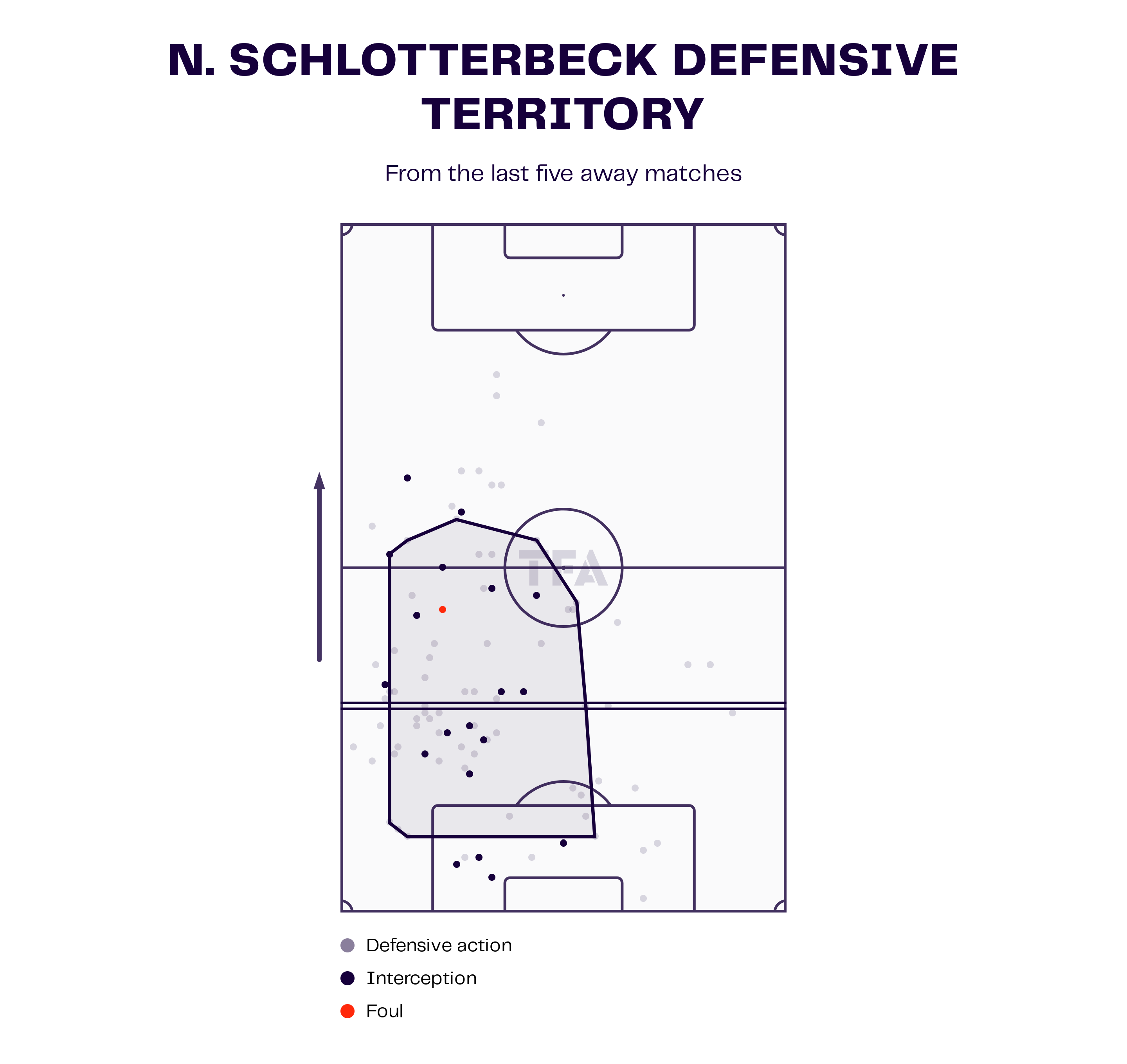 Nico Schlotterbeck was signed by Dortmund this summer and has been a regular starter for them. Schlotterbeck is one of the players who have done well for them in away matches. He has made an average of 5.52 defensive duels and 4.8 aerial duels per game this season. These figures have seen a rise in the away matches, with him making around 5.82 defensive duels and 4.95 aerial duels per game. His interceptions have also seen a rise with him making 5.59 interceptions per game this season and the figure rising to 6.07 in the away matches.

Borussia Dortmund’s poor form away from home has hurt them in the title race as they are currently in the sixth position in the Bundesliga. They were unable to either find the goals or stop the opposition from scoring. Their inefficiency at both ends has hurt them and they would be looking to do well away from home too when the season restarts in January.

Man Utd should look to sign no other than Sancho