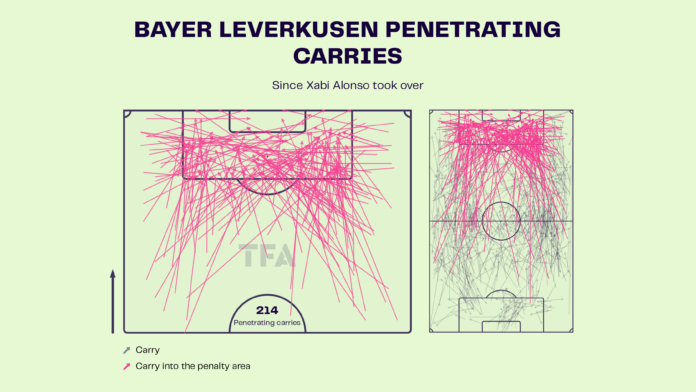 Bayer Leverkusen appointed Spanish legend Xabi Alonso as their manager following their poor start to the Bundesliga season. The former Bayern Munich player made a return to the German league, but this time as a coach. Leverkusen were in the doldrums when Xabi Alonso took over from Gerardo Seoane. They were second from the bottom when Xabi Alonso took over, with three points from eight matches. Now they are in 12th place with eighteen points from 15 matches. Since he took over, he has managed to change their fortune. Leverkusen has won five matches, drawn one, and lost one in the Bundesliga under Xabi Alonso. Therefore, we take a look at some stats to understand how Xabi Alonso has got Bayer Leverkusen back on track.

A change in formation

The two visuals above show the preferred formations used by previous manager Gerardo Seoane and current manager Xabi Alonso. Unlike Seoane, Xabi Alonso stuck to a back-three formation using wing-backs who could travel the entire length of the flank. Wing-backs Jeremie Frimpong and Mitchell Bakker now push much higher than in the four-back system. This allows them to focus almost entirely on attack and track back only when needed. With two pivots, one can always stay deep while the other player has the freedom to roam around. The wingers help to stretch the opposition’s defence and therefore create space through the middle. 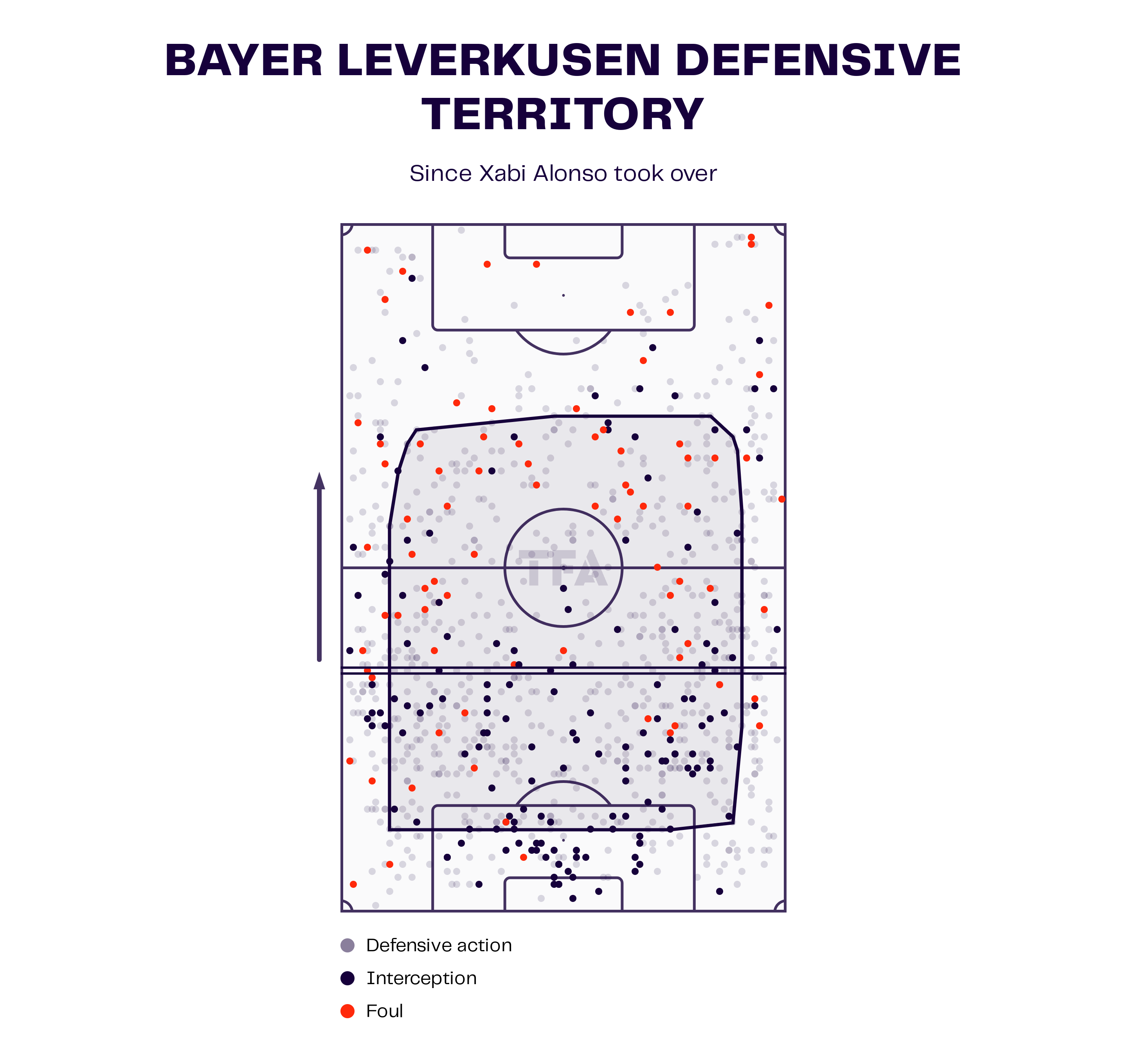 The above visual shows the defensive territory of Bayer Leverkusen in the last seven matches in the Bundesliga, i.e., since Xabi Alonso took over. Apart from a slip-up against a strong Eintracht Frankfurt in his second match, Alonso’s team has managed to deny the opposition three points. They also have three clean sheets from the last seven matches.

Since taking over, the three-man defence seems to have brought some more stability to the back line. The average goals conceded have come down from 2.12 goals per game to 1.28 goals. They have won 55.6% of the defensive duels contested and 42.14% of the aerial duels.

Leverkusen has made more interceptions in the middle and final third since the appointment of Xabi Alonso. Alonso deploys counter-pressing, which allows them to regain possession in the final or middle third. 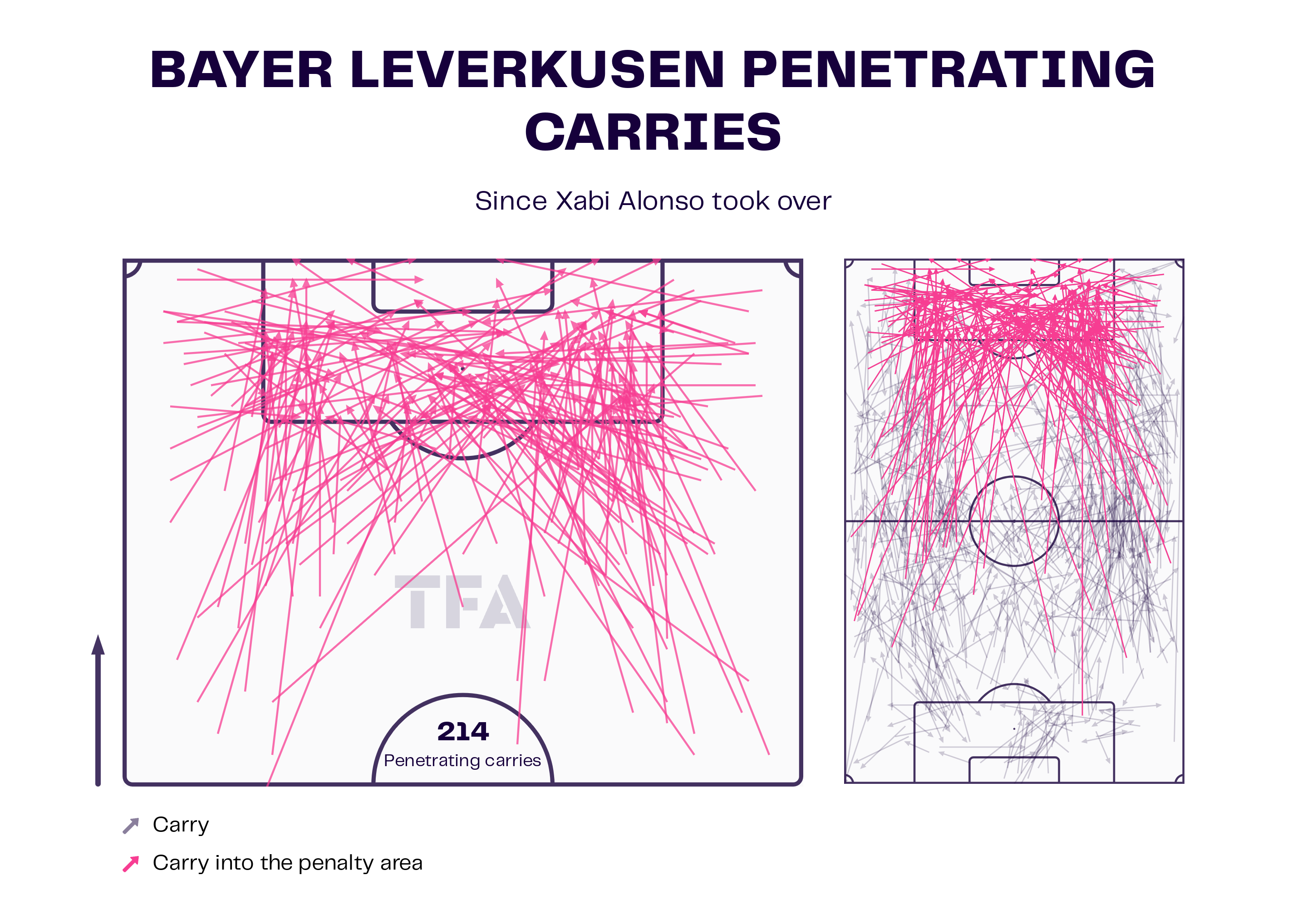 They have 214 penetrating carries from the game against Schalke. The high pressing that is deployed in this system allows the players to regain possession as quickly as possible and counter from there. With fast players like Callum Hudson-Odoi and Moussa Diaby, Xabi Alonso has some quick players who are good at dribbling and can create some quick threats. 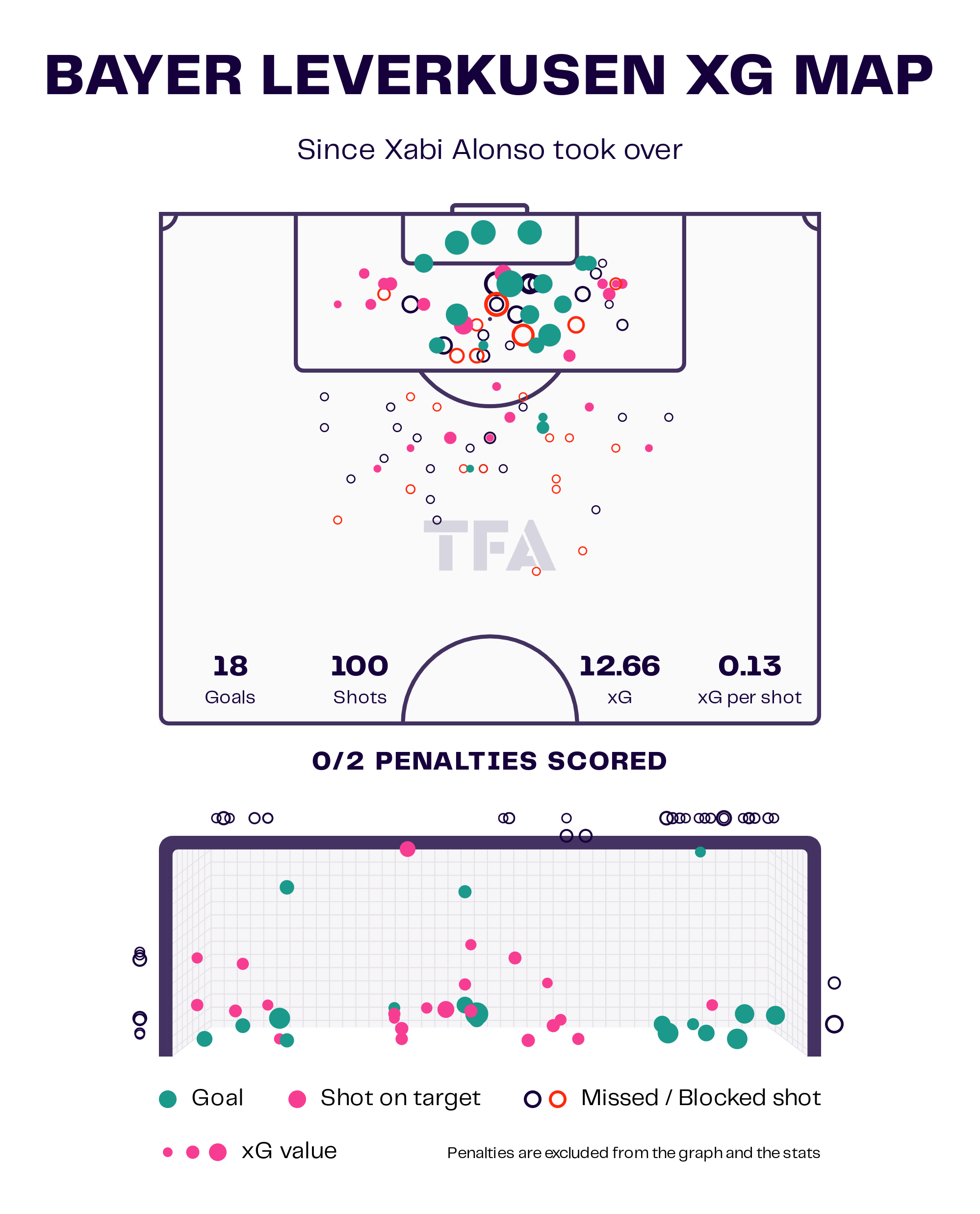 The above visual shows the xG map of Bayer Leverkusen following Xabi Alonso’s appointment as coach. They scored 18 goals in seven matches. Leverkusen has attempted a total of 100 shots and has an accumulated xG of 12.66. Their performance improved dramatically after the manager changed. 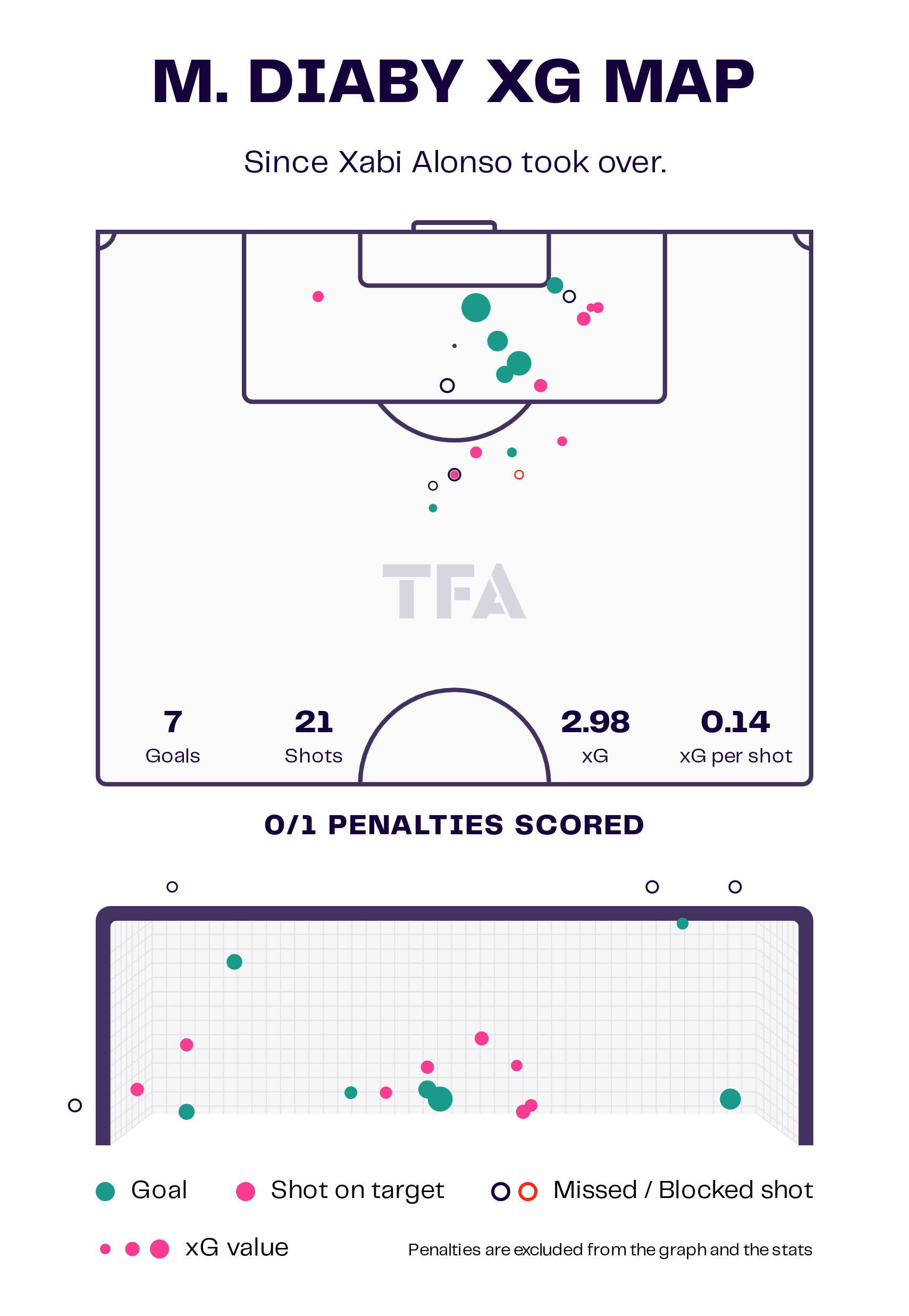 The above visual shows the xG map of Moussa Diaby after Xabi Alonso took over as the coach. He hadn’t scored a single goal until that point. But the Spanish legend has managed to bring the best out of him. With seven wins in seven matches, Diaby has restored his form and is looking ready to lead the team in the title race. He has attempted 21 shots and scored seven goals, becoming one of the most important players for Xabi Alonso.

There is no doubt that Xabi Alonso was a tactical genius even in his playing days. Having played under some of the greatest coaches, Alonso has developed a brilliant coaching style for himself. His style is attacking, fast, and direct. The impact he has managed to create in the first seven matches is promising, and he has truly brought Leverkusen back on track.