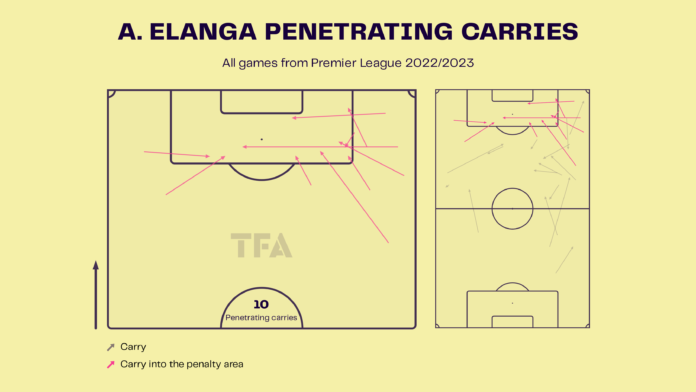 Borussia Dortmund may lose many players in the next summer transfer window and are already looking for alternative options. As per reports, Dortmund is working on signing Manchester United winger Anthony Elanga. The 20-year-old forward has had very little playing time under new manager Erik Ten Hag and has started only five out of the 13 matches he has played. But he is a young player with a lot of untapped potential with age and time on his side. A move to the Bundesliga could help him kickstart his career. Therefore, we look at some of his stats to understand why Borussia Dortmund is looking to sign the young forward. 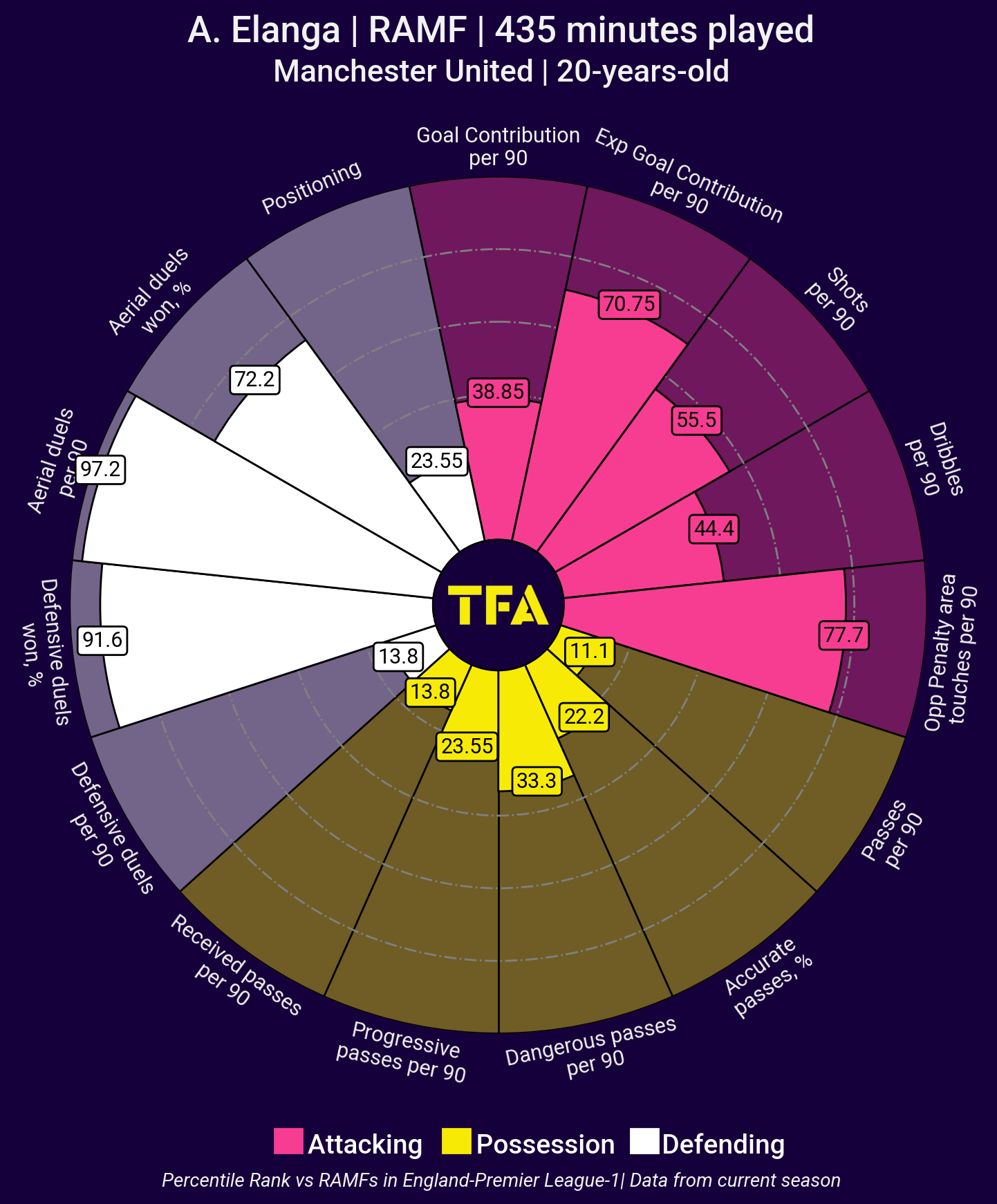 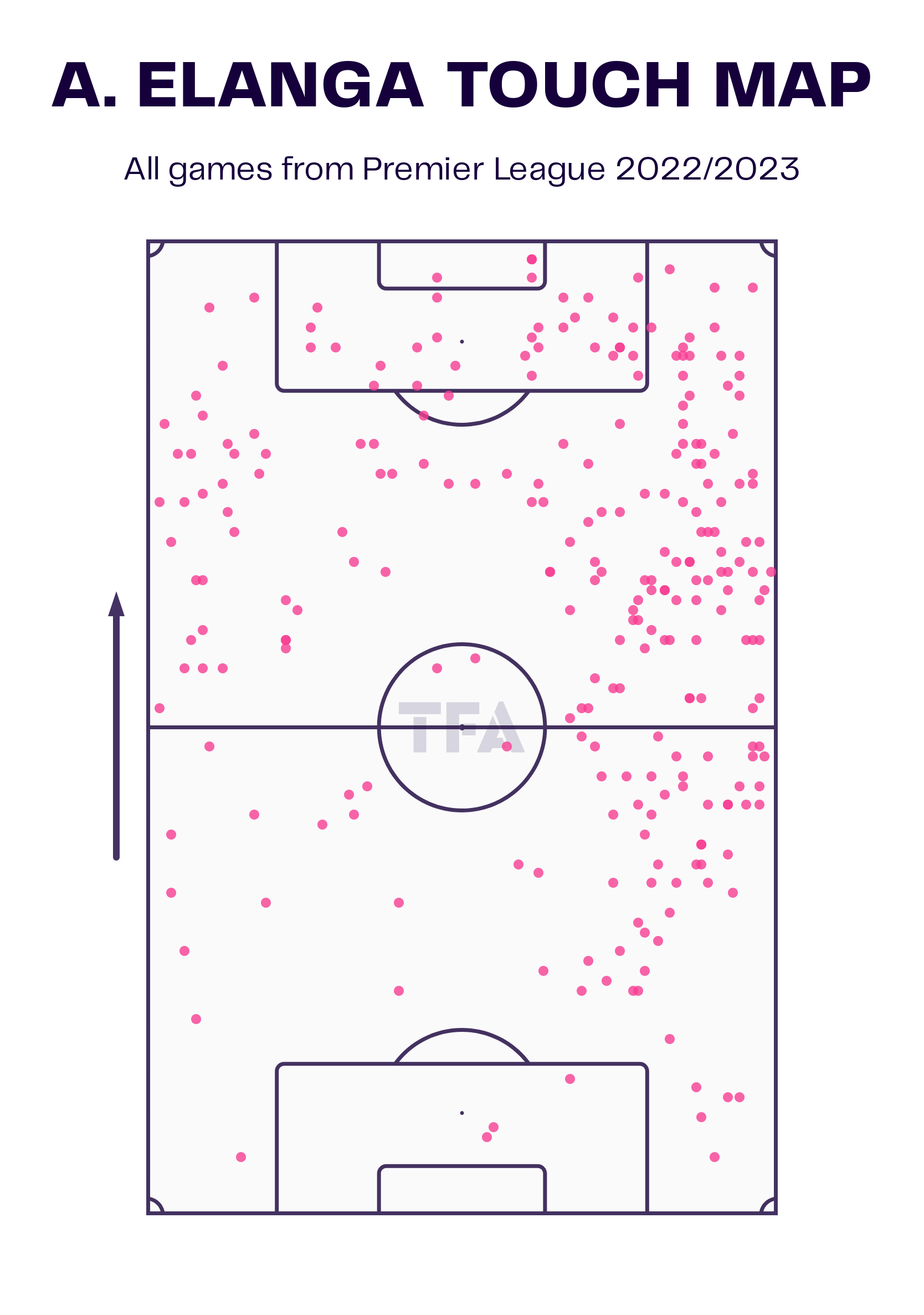 The above visual shows Anthony Elanga’s touch map from the current Premier League season. He can play both as a right-attacking midfielder and as a centre-forward. We can observe from the visual that he has taken most of his touches in wide areas and likes to take the game forward. But it can also be seen that he tracks back to help defend when needed. Elanga has taken an average of 3.72 touches in the penalty box and can pose a real threat in front of the goal. 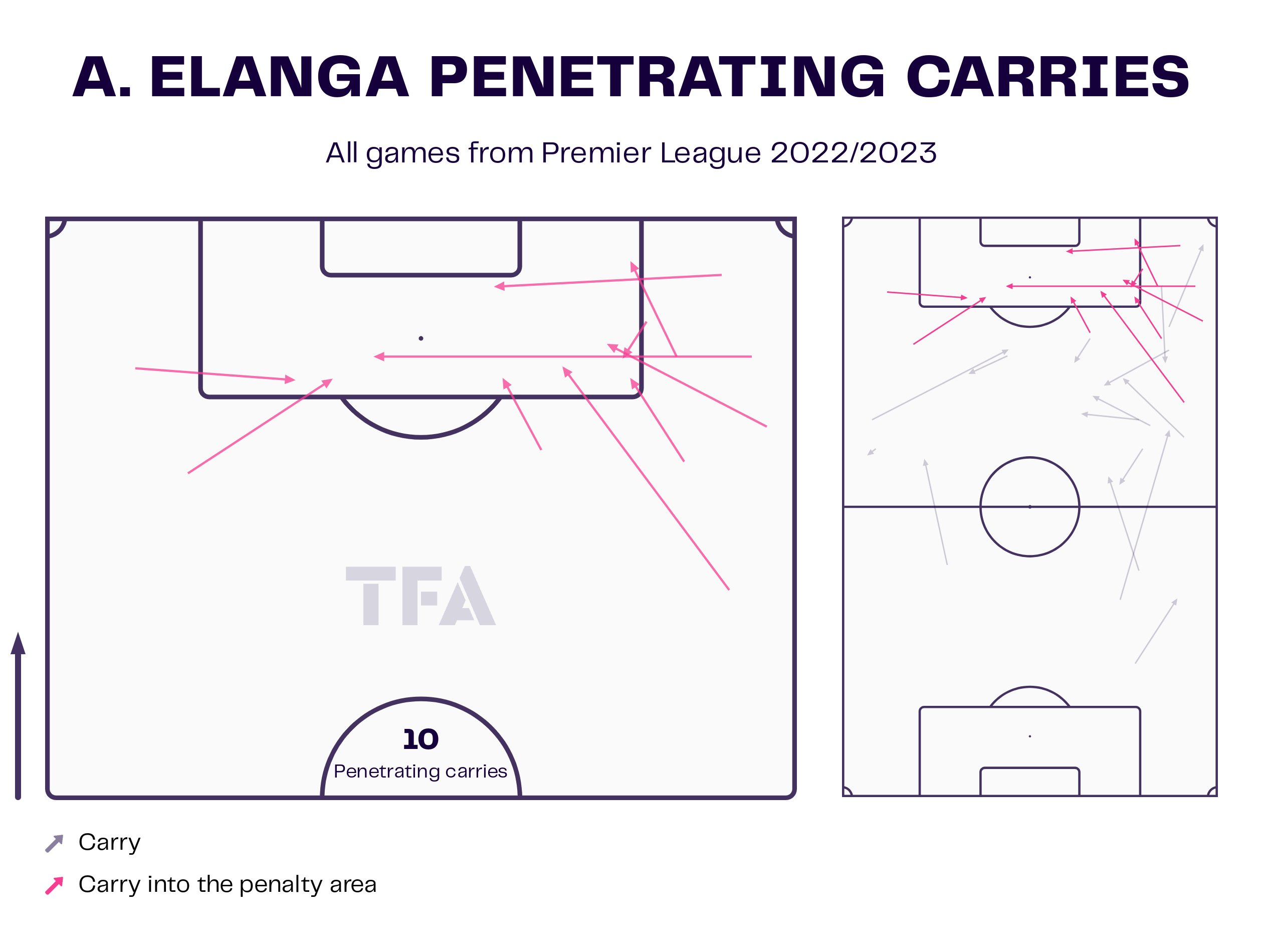 The above visual shows Anthony Elanga’s penetrating carries from the current Premier League season. He has made only ten penetrating carries this season but averages 3.93 dribbles per game. He has enjoyed 42.1% success in all the dribbles that he has attempted. We can observe that he likes to cut into the box from a wide position. This can come in handy for Dortmund, especially with Haller returning to the squad. Elanga’s pace is a real threat and therefore will be useful to launch quick counter-attacks. 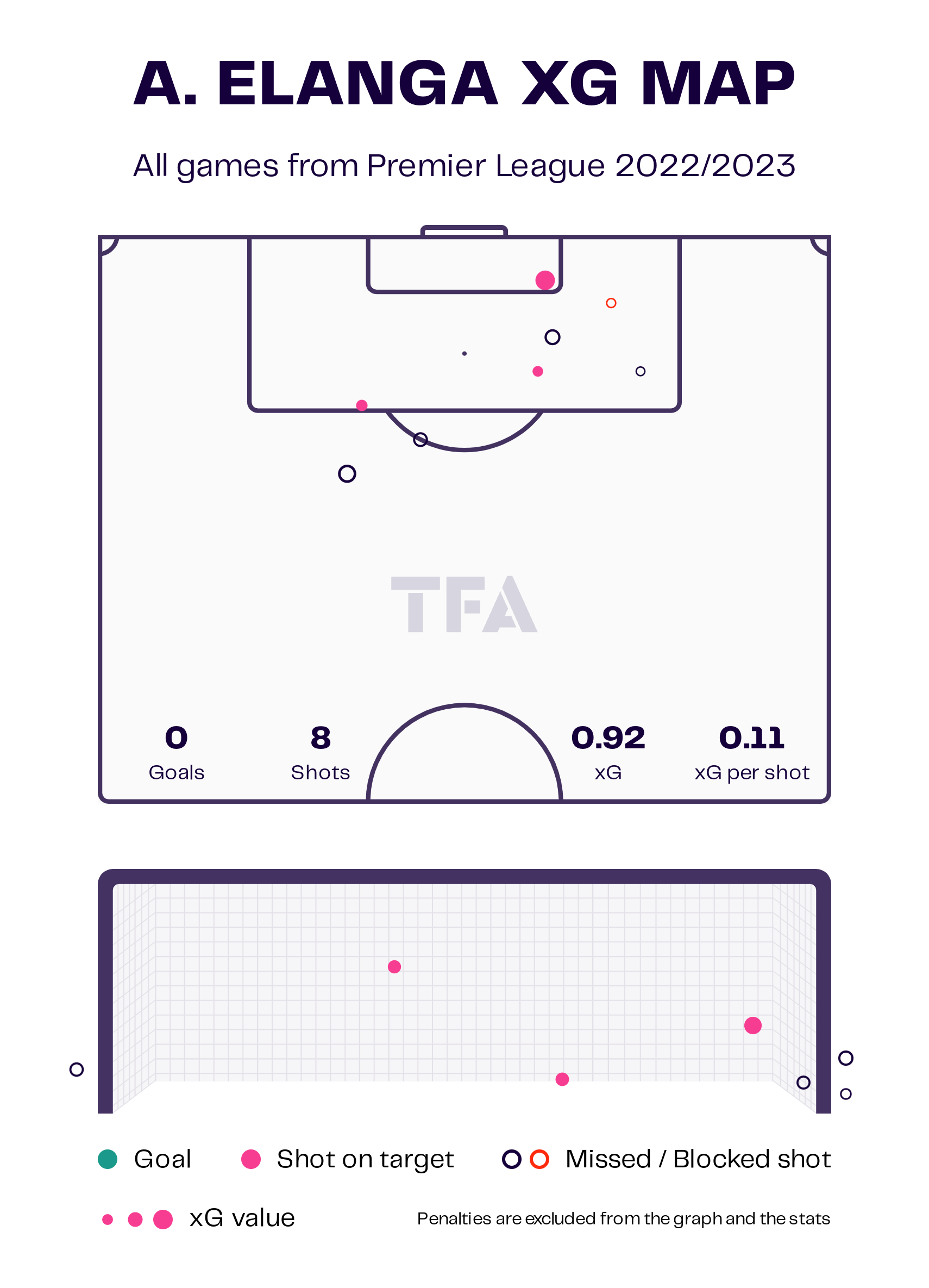 The above visual shows the xG map for Anthony Elanga this season. He has yet to score a goal in the Premier League this season. Elanga has tried a mere eight shots this season, with five of them off-target. The 20-year-old has attempted an average of 1.66 shots per game with a success rate of 37.5%. We can also observe that he took most of his shots from outside the box. 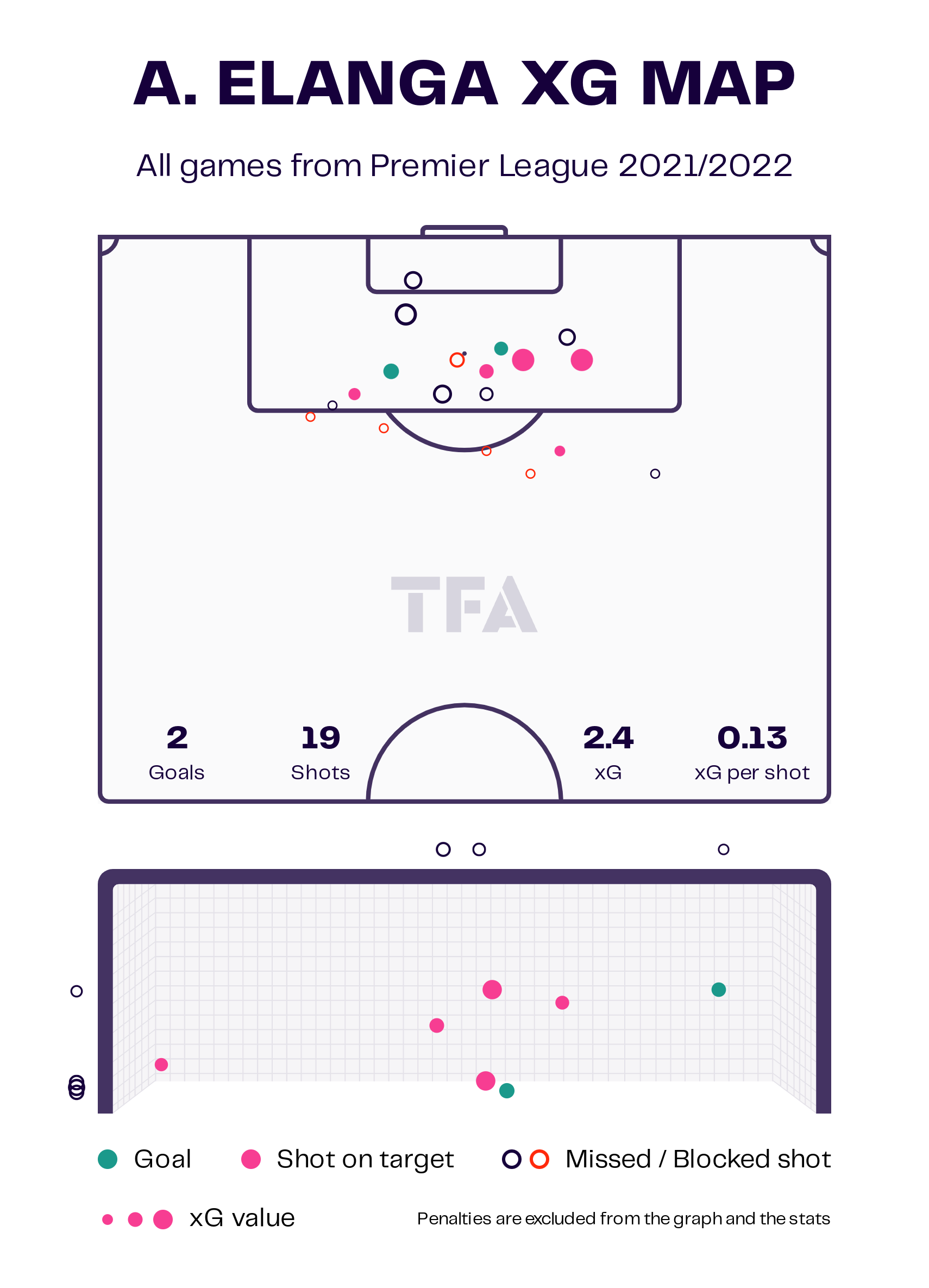 The visual above shows Anthony Elanga’s xG map from the previous season. He scored two goals in the previous season. Elanga attempted a total of 19 shots with an average of 1.31 shots per game. Out of the 19 shots, seven were on target, and he had a shooting accuracy of 36.8% as well. His average shooting stats have gone up slightly this year, which will be good news for Dortmund if he moves to Signal Iduna Park. 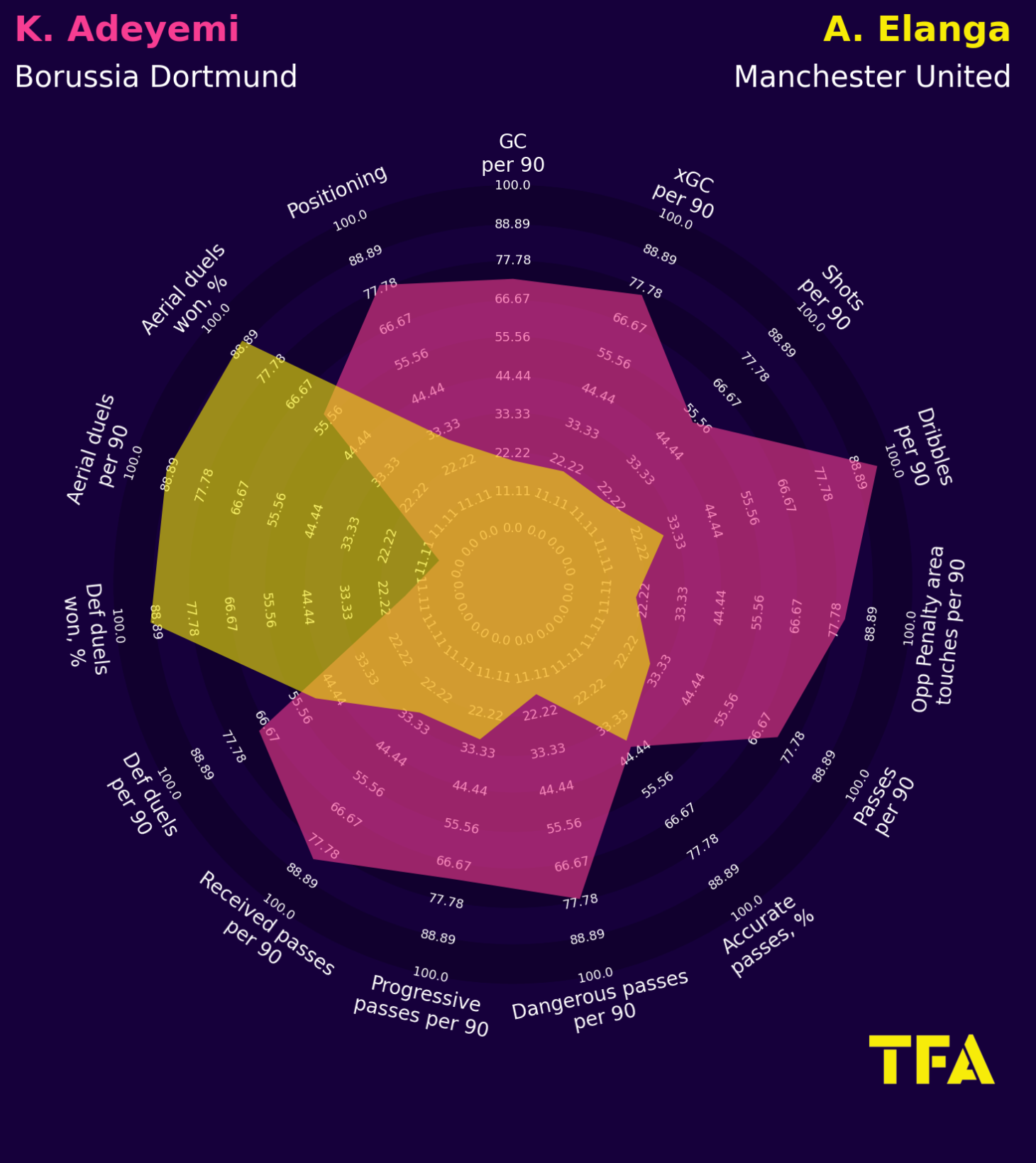 The above visual compares the radars of Anthony Elanga and Borussia Dortmund winger Karim Adeyemi. Both are young and fast and are bright prospects for the future. Karim Adeyemi, who signed for Dortmund in the summer, has better stats than Elanga in almost all metrics. Elanga has better stats in defensive duels won and aerial duels, while Adeyemi leads the stats in all other metrics. If Elanga joins Dortmund, this duo can cause some mayhem for the opposition.

If Elanga decides to join Borussia Dortmund, their odds in the 1×2 market might rise as they will have a dangerous player in their ranks. Meanwhile, the over/underlines are not expected to undergo a significant change as he has not been in the best form in scoring or assisting.

Anthony Elanga is a bright prospect and has great potential as well. If he decides to join the yellow-and-black army, he could thrive under Edin Terzic, who loves to give youngsters opportunities. This could be a move that helps him launch his career on the big stage.

‘Feel good at Dortmund’- Hazard has been one of the signings...