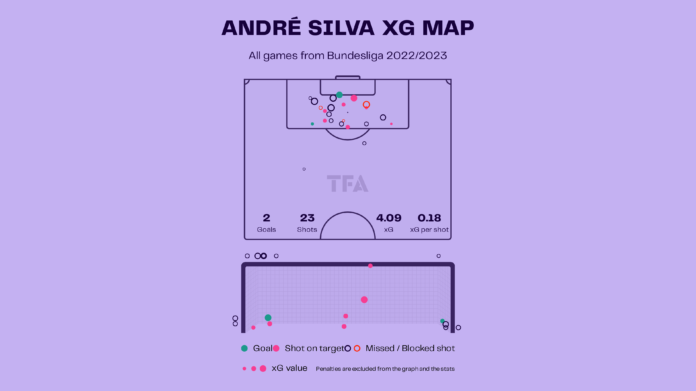 RB Leipzig’s impressive performance both in the Bundesliga and in Europe has turned many heads towards them. Big clubs are trying to lure some players away from Leipzig, and their main goal scorer Christopher Nkunku has signed a deal with Chelsea to join them in the summer. Many big clubs are also behind their star defender, Josko Gvardiol. Therefore, it becomes imperative that they find a player who will step up once they leave.

Andre Silva is one of the names that come to mind. Silva, with just two goals and one assist this season, has not been up to the mark, and Leipzig will be placing their trust in the 27-year-old Portuguese to find his form again. With 11 goals and three assists, Silva was one of Leipzig’s best performers last season. His lack of form goal-wise could hurt Leipzig once Nkunku leaves. Therefore, we look at his stats from this season to understand why he needs to step up for RB Leipzig.

Andre Silva has made 15 appearances this season in the Bundesliga and has two goals and an assist to his name. He started nine matches and came on as a substitute in six matches. However, he has scored three times in the UEFA Champions League and the DFB Pokal and has five assists from the two competitions as well. 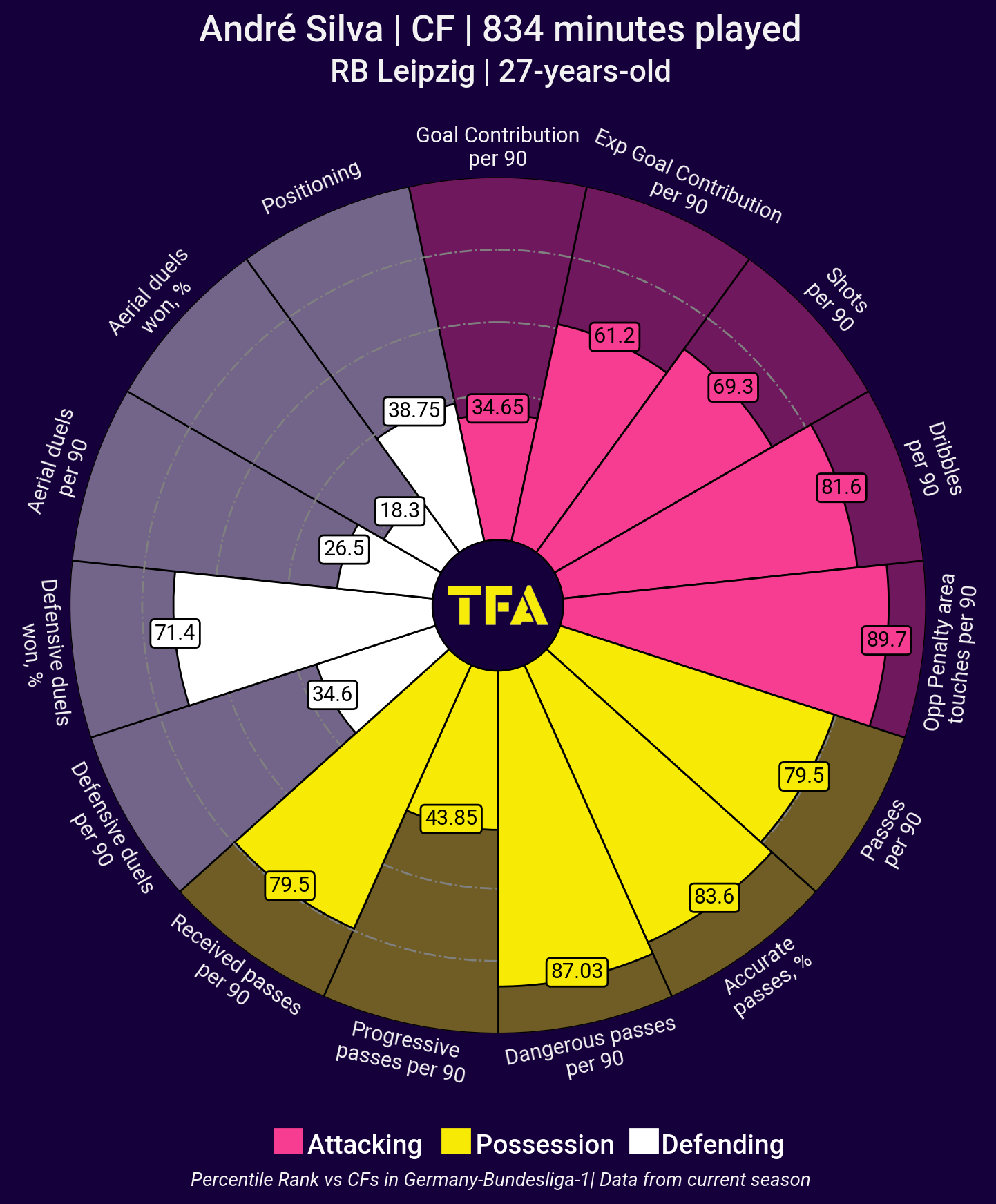 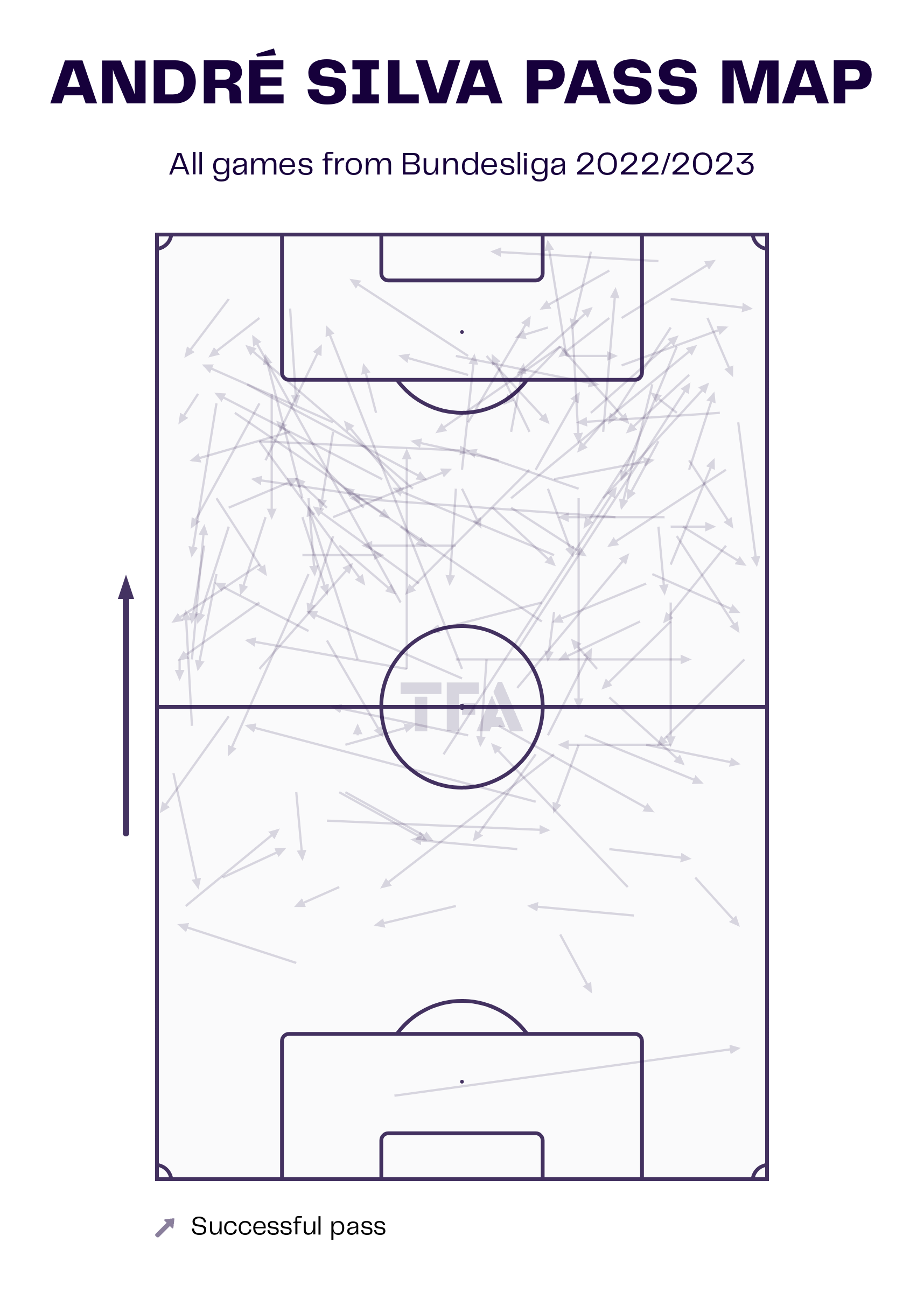 Passing is one of Silva’s main attributes. Ranked in the top 87.03 percentile for dangerous passes and the top 83 percentile for accurate passes, he likes to play short passes, as we can observe from the above visual. He has a passing accuracy of 77.72% and makes around 23.63 passes per game. As he is a centre-forward, he usually plays some short passes to a nearby player and runs into position to receive the pass. He makes around 1.62 passes into the final third per game with 73.3% accuracy. Moreover, he makes an average of 1.83 passes into the penalty box as well. 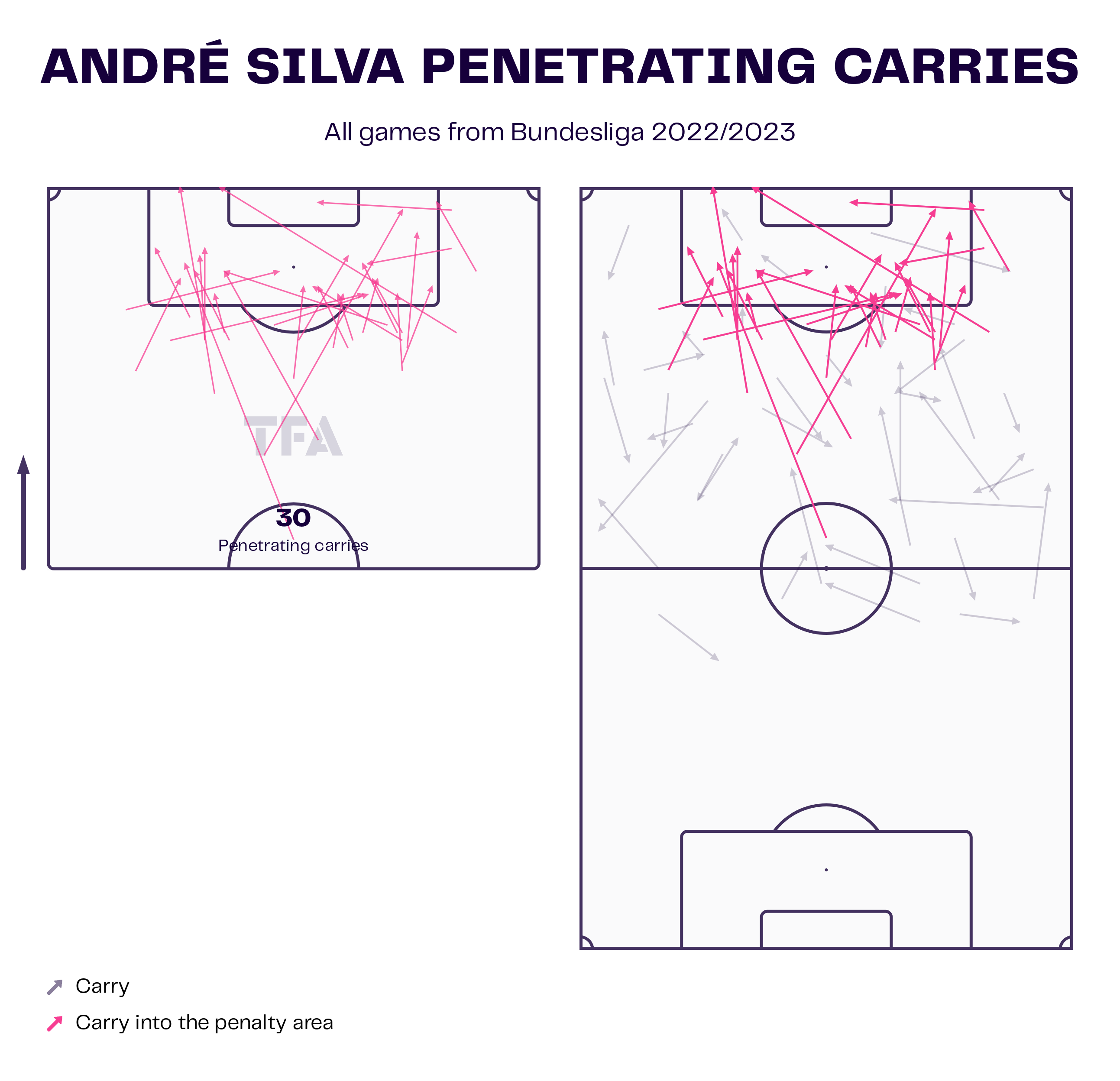 The above visual shows Andre Silva’s penetrating carry this season. He has made 30 penetrating carries with an average of 4.42 dribbles per game. He has a success rate of 51.2% in dribbles and has been a livewire in front of the goal. His dribbling stats have improved from last season when he averaged 3.03 dribbles per game. Apart from the dribbles, he also made 0.97 progressive runs per game this season, which saw a dip from last year’s 1.07 runs per game. 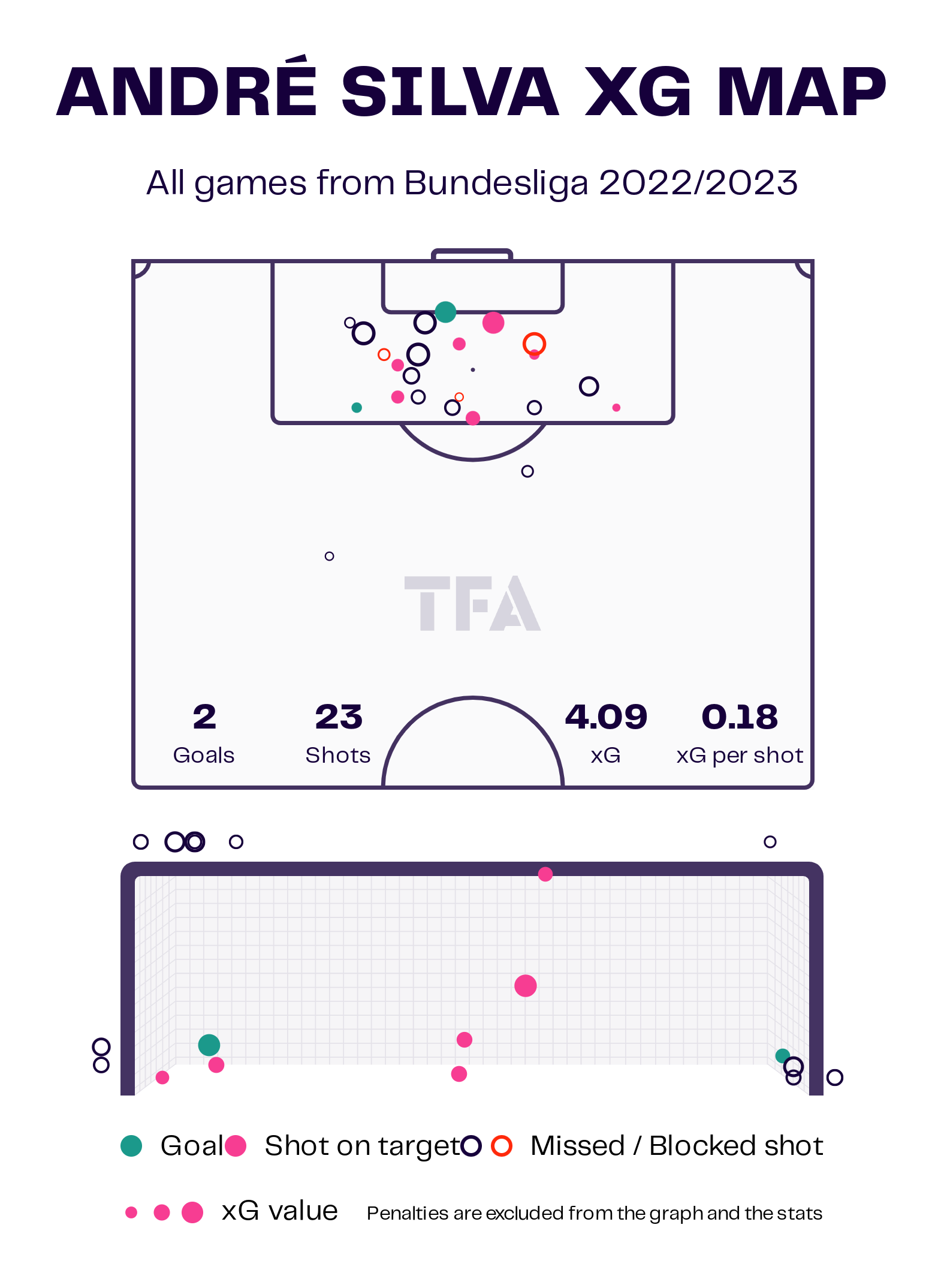 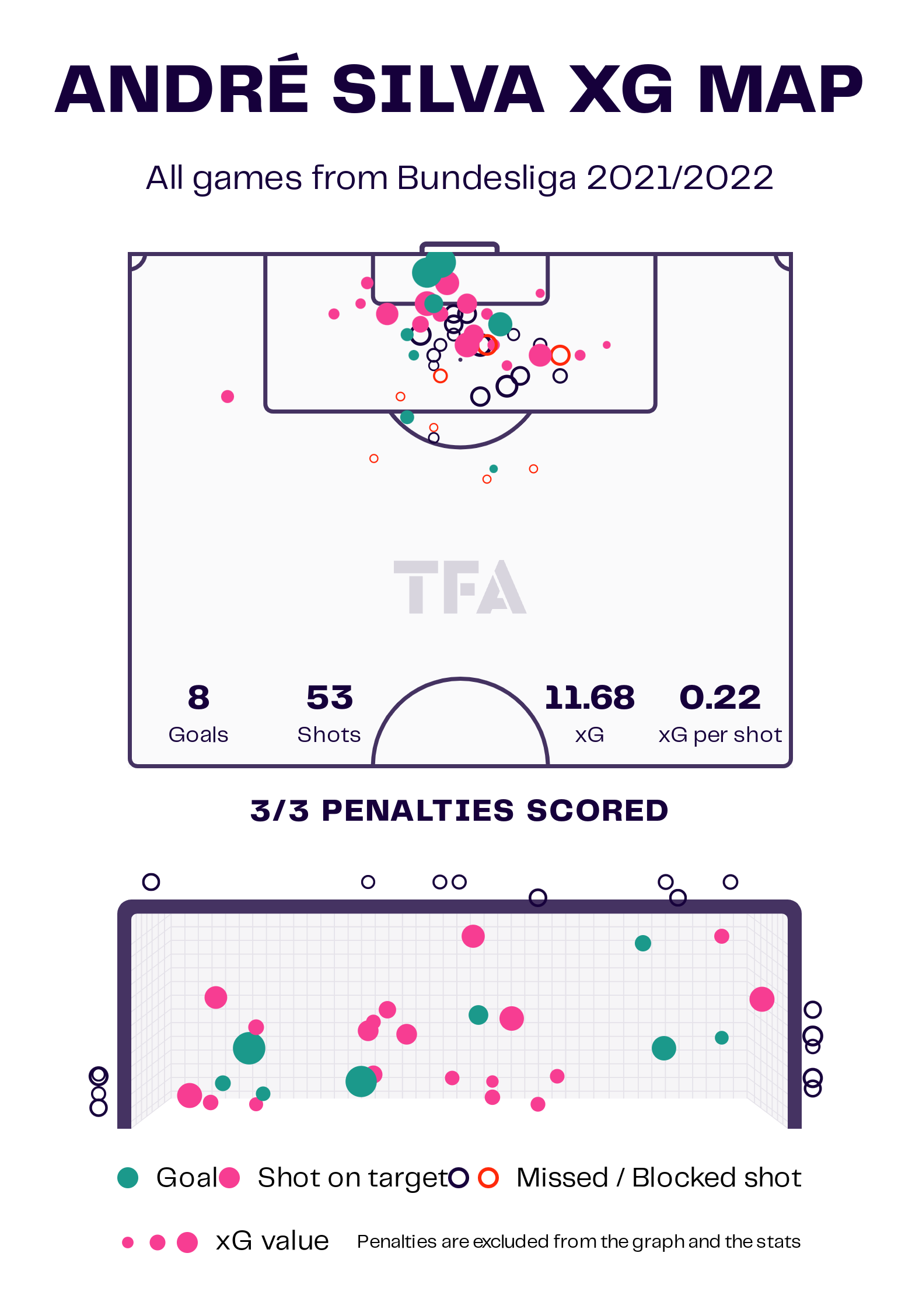 The two visuals above show Andre Silva’s xG map from the current season and the previous season. Last year, he racked up a total of 11 goals in the Bundesliga from 53 shots, with eight from open play and three from spot kicks. He averaged 2.29 shots per game with 53.6% accuracy. Out of the 53 shots, 27 were on target, and eight were converted.

This year, he has scored only two goals from 23 shots, with an average of 0.22 goals per game, which is down from 0.45 goals per game last season. Silva has attempted an average of 2.48 shots per game, with a 39.1% success rate. This figure has seen a rise from the previous season. This season, the shots on target have also fallen from 27 to ten. 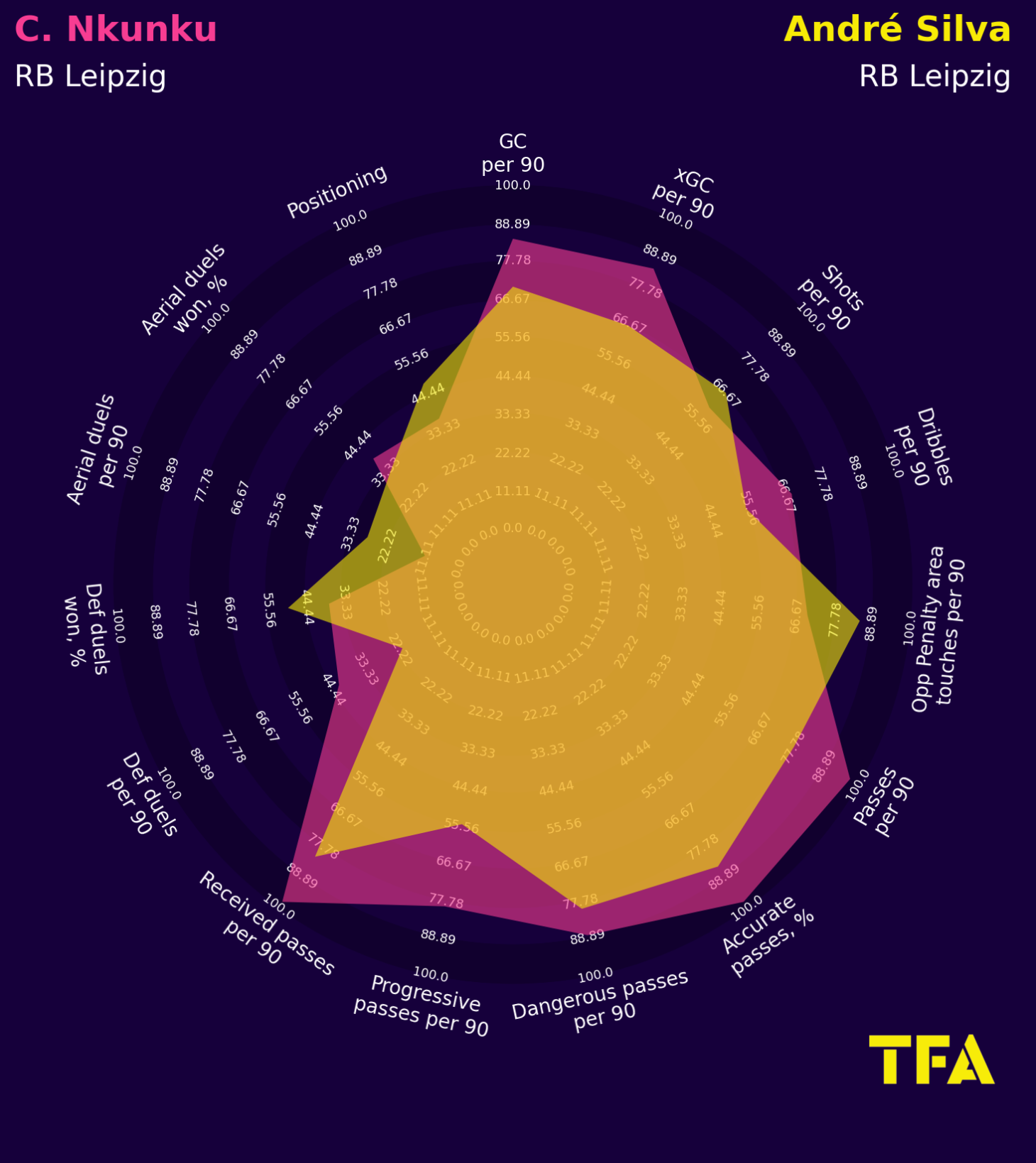 The above visual compares the radars of Andre Silva and his teammate Christopher Nkunku. Nkunku, who has signed a deal to join Chelsea in the summer, has been in phenomenal form this season and is the top scorer in the Bundesliga. We can observe from the visual that Nkunku has better stats in almost all metrics. He leads in passing, dribbles, defensive duels, goal contributions, and aerial duels won. On the other hand, Andre Silva has better stats in defensive duels won, aerial duels per 90, positioning, shots, and entry into the opposition penalty box per 90. Silva will have to improve in many aspects if he has to fill Nkunku’s shoes.

Andre Silva was signed by RB Leipzig in 2021 following a great season with Eintracht Frankfurt when he scored 28 goals in a season. However, he has not produced the same numbers for Leipzig. But now he must, especially with two big names potentially leaving them. Manager Marco Rose will also be hoping that the Portuguese forward can bring his A-game when the season restarts.