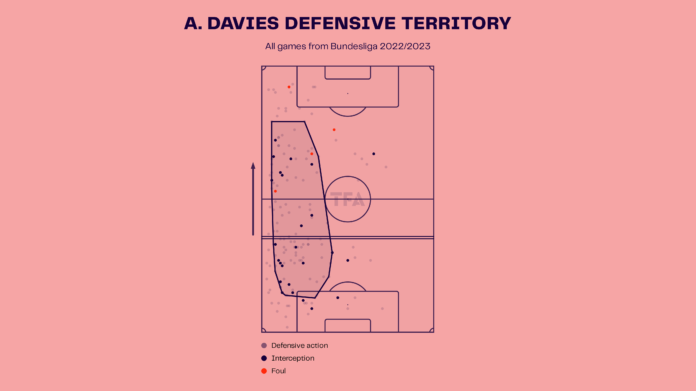 Bayern Munich is enjoying one of their most successful years under Julian Nagelsmann. With a squad that is almost complete in every sense, they are the team to beat in Europe. One of the mainstays at the back for them is the 22-year-old Canadian, Alphonso Davies.

Bayern signed Davies in the 2019 winter transfer window when he was just 18 years old. Ever since the Canadian has become a regular starter for them and has played a huge role in both defence and attack. In a system that is direct and attacking, Davies fits perfectly and has contributed a lot to their success. One of the fastest players in the world, Alphonso Davies, overlaps and tracks back regularly. He is fast, a great dribbler, and can find the odd goal as well. We take a look at his stats to understand what makes him one of the best left-backs in the world.

Alphonso Davies missed three matches this season due to injuries. The Canadian has started every other match and has an assist from 12 matches in the Bundesliga. He has four assists and one goal across all competitions. 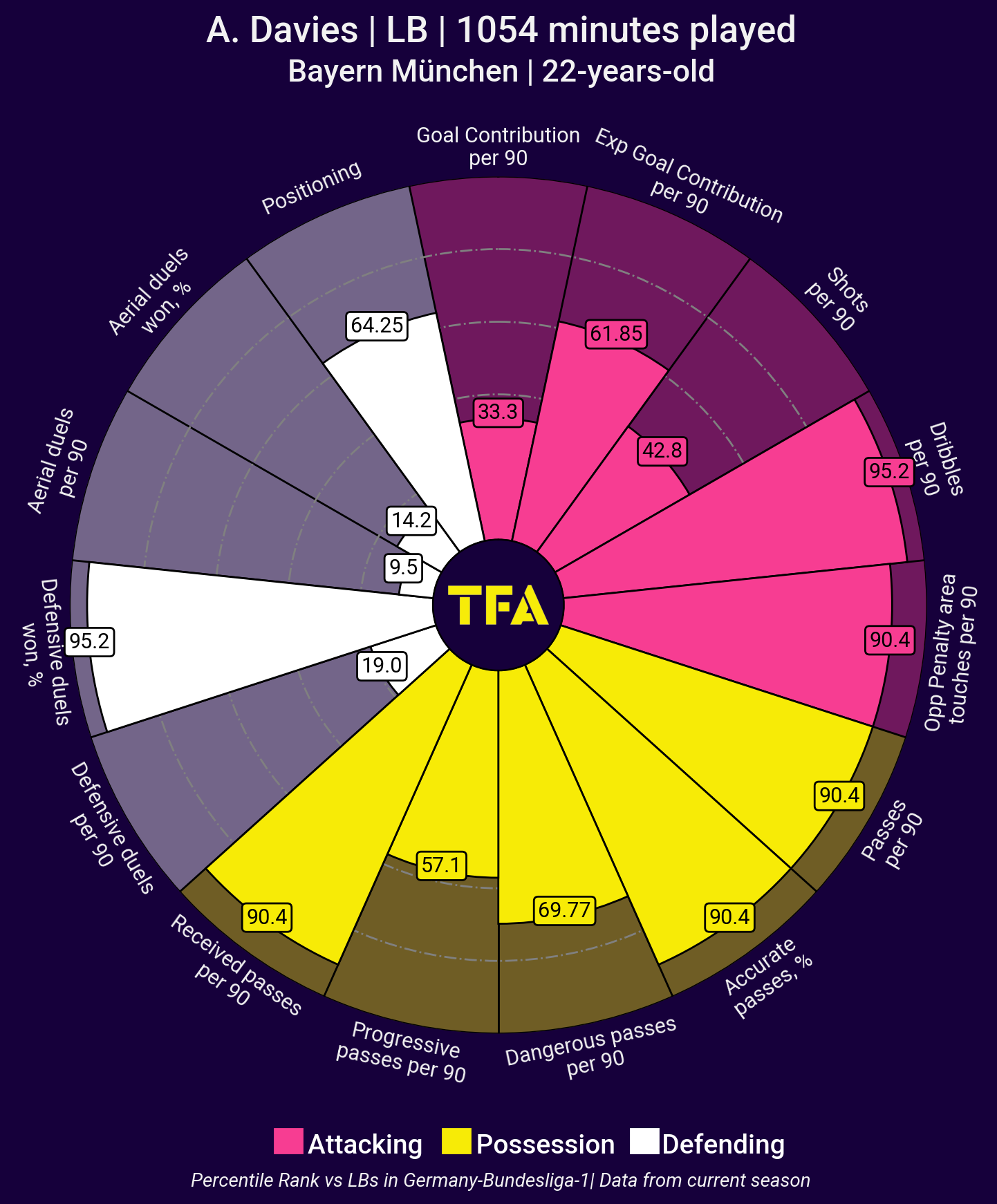 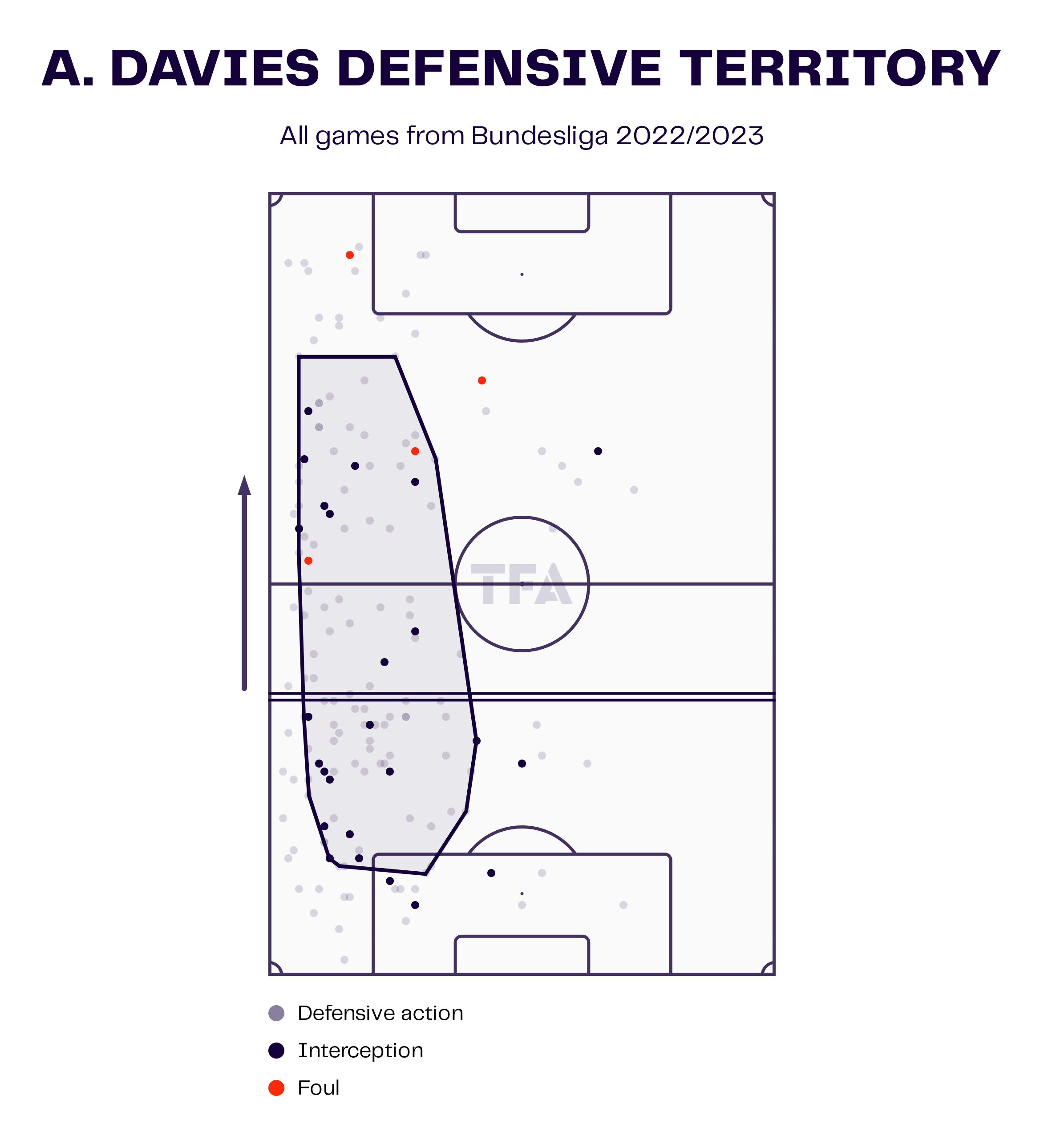 As a defender, Davies does his primary job neatly. He is fast, strong, and has a good understanding of the game as well. As the above visual suggests, he guards the left side of the Bayern defence and makes a lot of interceptions. Davies makes around 4.7 interceptions per game. He tracks at full speed and makes some important tackles. He also takes part in around 5.04 defensive duels with a 76.3% success rate and around 0.94 aerial duels with a mere 27.3% success rate. Aerial duels are perhaps the only thing Davies has to improve on. These figures have seen a dip this season from last year’s 6.79 and 1.61, respectively. 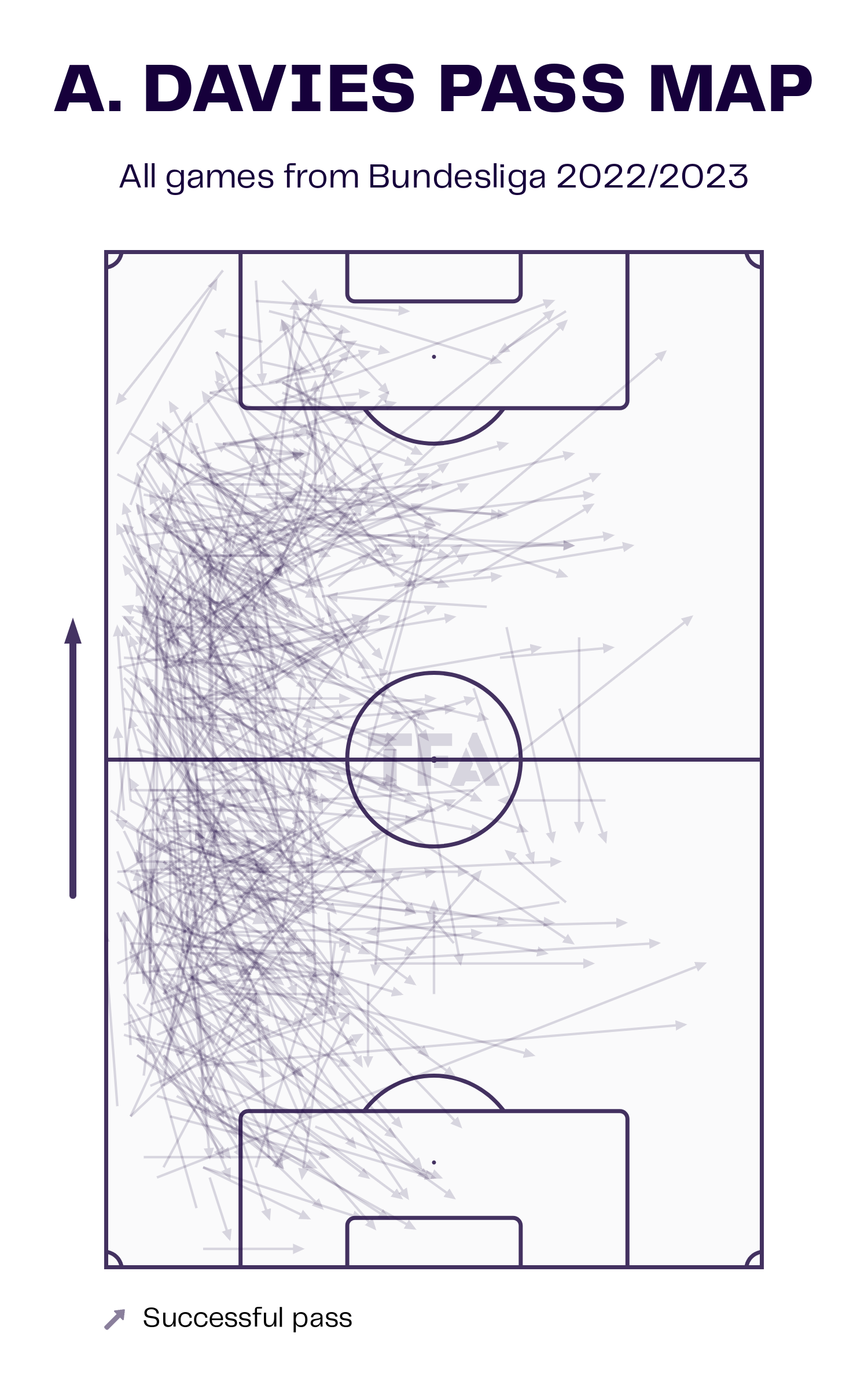 With a passing accuracy of 88%, Alphonso Davies has one of the best passing records among Bundesliga left-backs. The above visual shows his pass map from the current Bundesliga season. We can observe from the map that he covers a lot of ground and makes a lot of passes at both ends of the pitch. While overlapping, Davies makes around 5.81 passes with 73.5% success to the final third and 1.96 passes with 60.9% success into the penalty box. The first figure has seen an improvement from last year’s 4.54 passes into the final third, while the second figure has seen a dip from 3.71 passes into the penalty box from the previous season. 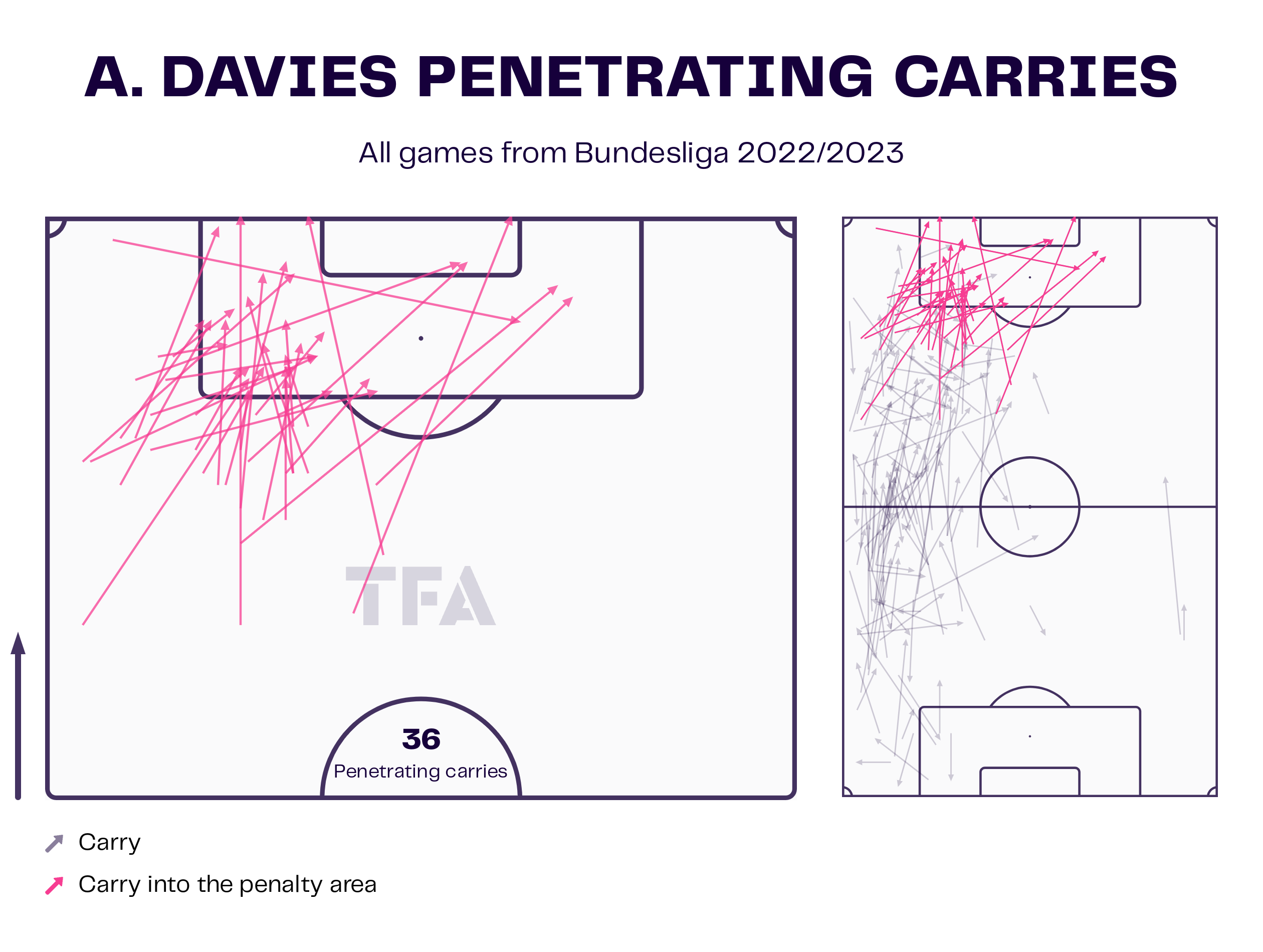 Nicknamed “the road runner” by his teammate Thomas Muller, Davies does justice to that name with his super-fast runs. He is a brilliant dribbler and is ranked in the top 95.2 percentile for the same. Davies is good at creating space and running into it with pace, all the while with the ball glued to his feet. He has made 36 penetrating carries this season with an average of 6.57 dribbles per game and a 41.6% success rate. We can observe from the above visual that he can dribble the ball for long distances and that he either goes wide or cuts inside to combine with other players. However, his dribbles per game have also taken a hit, coming down from an average of 8.16 dribbles per game the previous season. 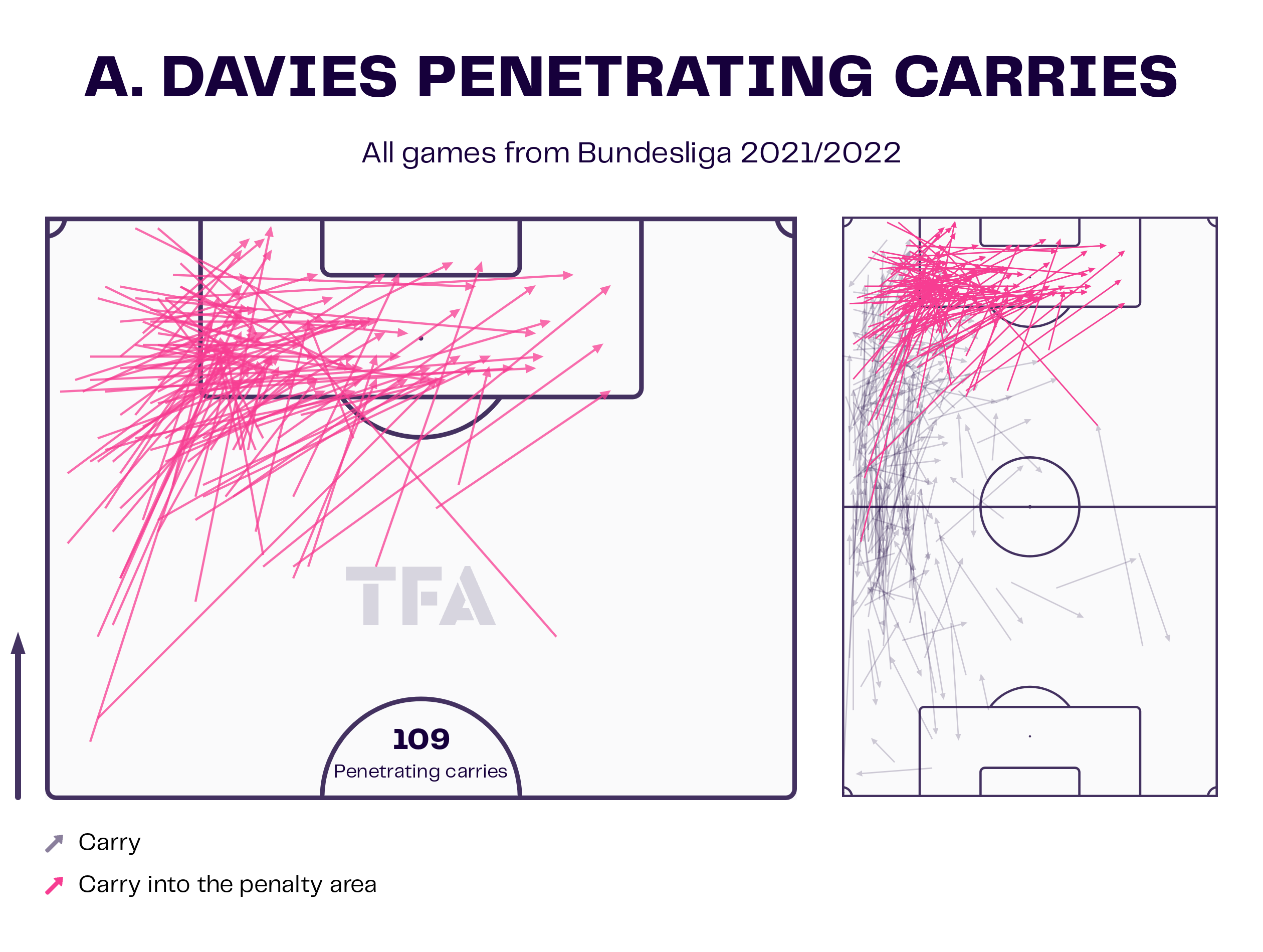 The above visual shows the penetrating carries made by Alphonso Davies last season. He made 109 penetrating carries with an average of 8.16 dribbles per game. He had a success rate of 55.1% and helped Bayern break defensive lines. Moreover, he also made an average of 5.03 progressive runs per game. His overlapping played a big role in Bayern’s attack through the left side.

Best left-back in the Bundesliga? 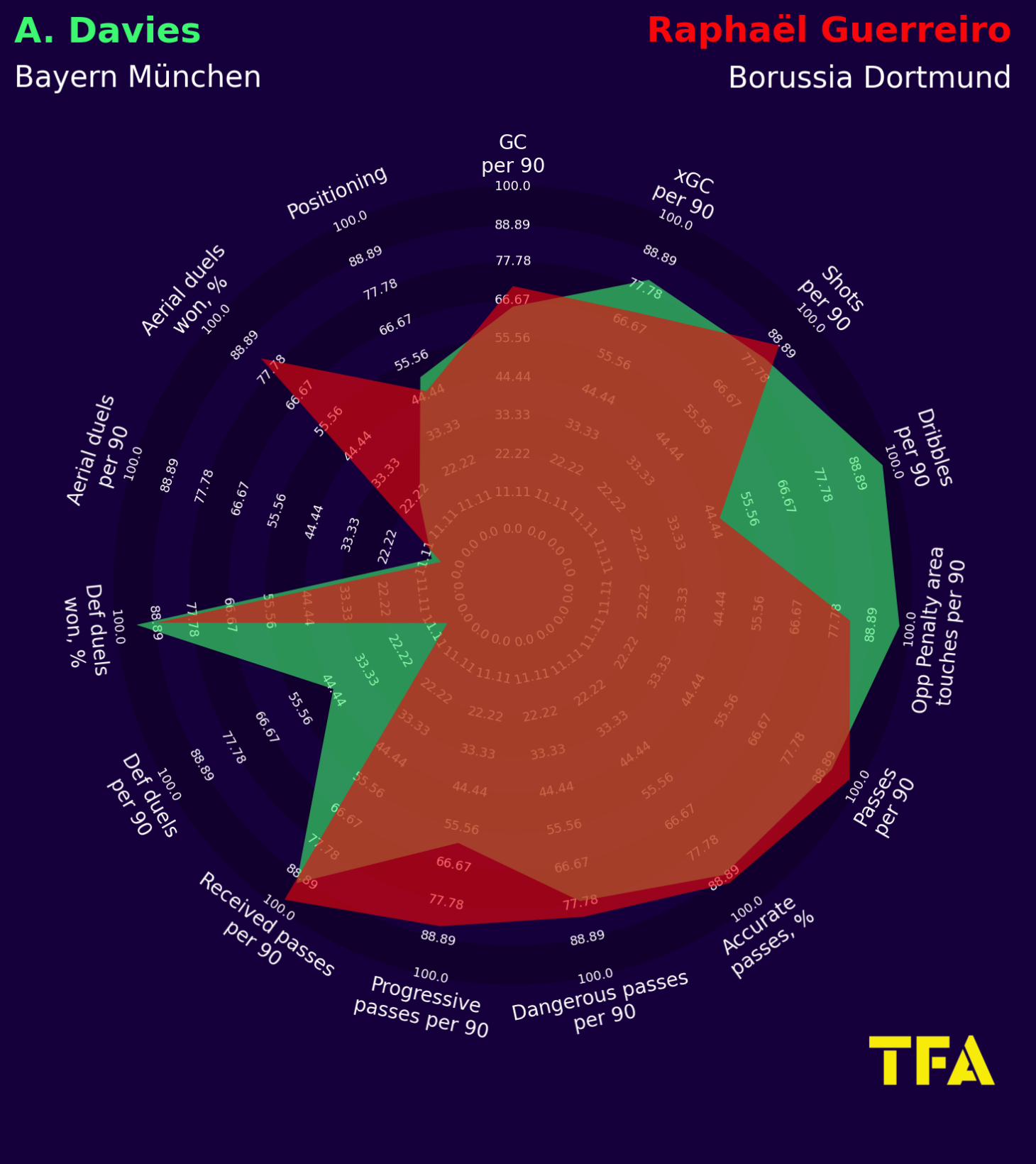 The above visual compares the radars of Alphonso Davies and Borussia Dortmund left-back Raphael Guerreiro. Both of them have great stats and are important to their respective teams. The former has better stats in dribbles, entry into the opposition penalty area, and defensive duels won, while the latter takes the lead in aerial duels, passing, and shots per game. Davies, though, has an extra advantage with his speed that allows him to track back and defend even if he is high up the field.

Alphonso Davies, at 22 years old, has won every club-level trophy with Bayern and has taken Canada to the World Cup as well. His role in both his club and the national team is of great value and makes him irreplaceable. The speed combined with his strength and football intelligence make him one of the best left-backs in the world at the moment, and the stats seem to agree with that statement.

The Data Zone: Brazil on top against Colombia in the Copa...

Both the Bundesliga stars might be on their way to Premier...

Under the microscope: How Florian Wirtz’s absence has pushed Bayer Leverkusen...