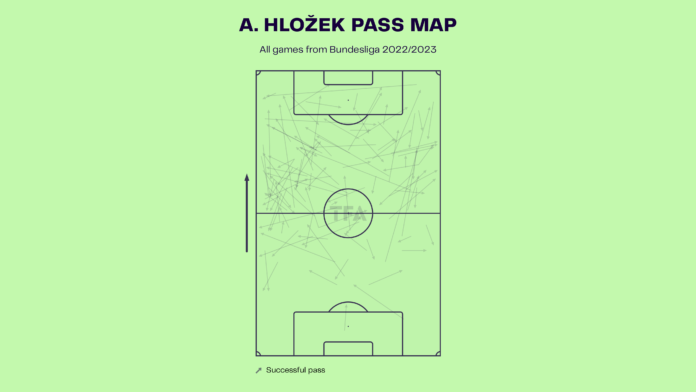 Regarded as a “young Ibrahimovic,” Adam Hlozek was roped in by Bayer Leverkusen in July. The Czech Republic international had a staggering time at Sparta, where he scored 40 goals and registered 36 assists to his name. Standing tall at 6’2, the 20-year-old was the youngest goal scorer in the Czech Republic’s top-tier league. His move to Bayer Leverkusen, however, has not gone perfectly to plan, as he has not yet produced the stellar performances he did for Sparta. Therefore, we look at his stats to understand why Hlozek’s move to the Bundesliga has not worked out yet. 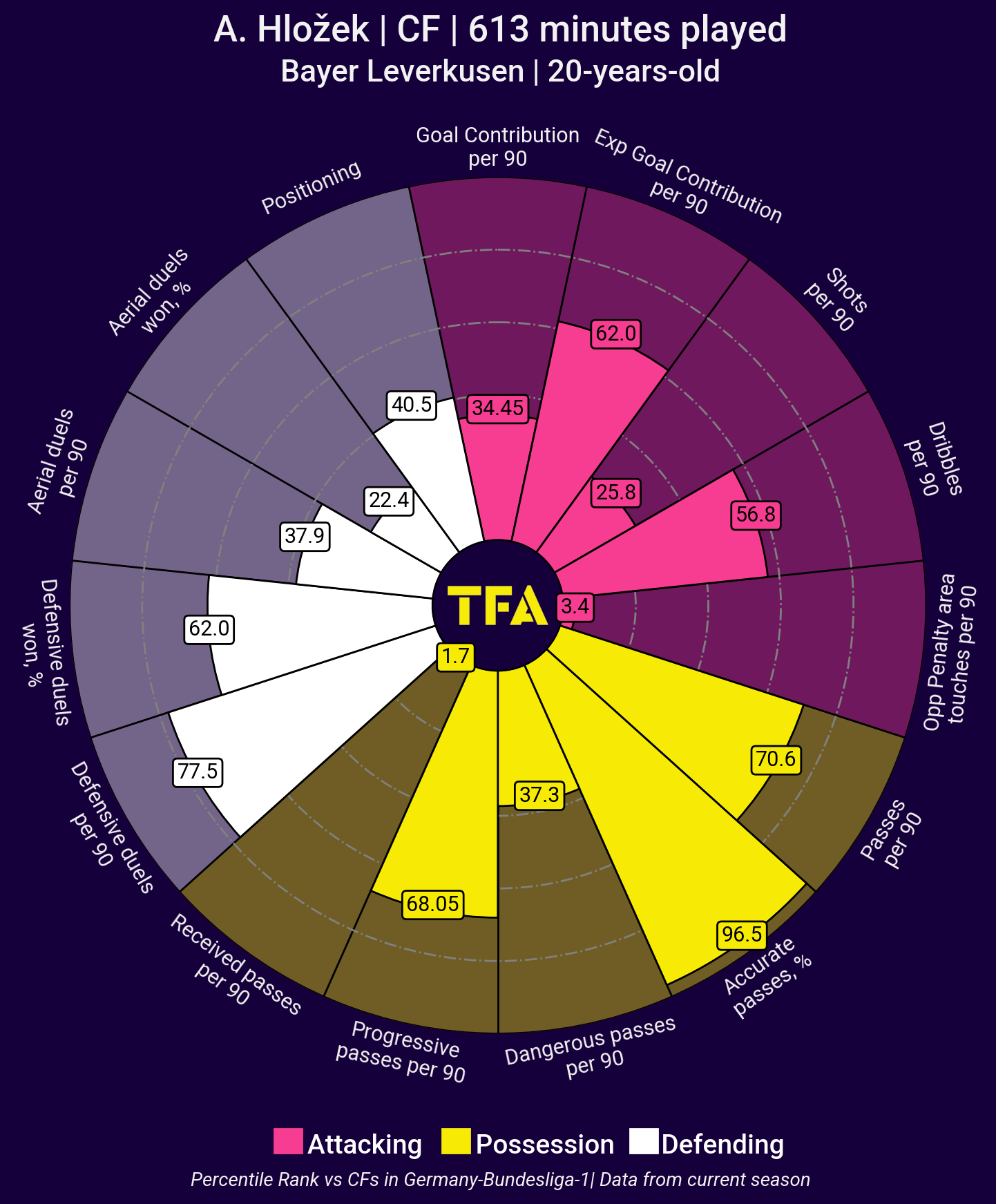 The above visual shows Adam Hlzoek’s percentile rank compared to other centre-forwards in the Bundesliga. He’s done well in both attacks and passing. He is ranked above average for dribbles and expected goal contributions per 90. Hlozek is also ranked very highly in passing accuracy. He is ranked in the top 96.5 percentile for accurate passes per 90 minutes. He is also ranked above average for passes per 90. Another area where he has done well is in defensive duels, for which he is ranked in the top 77.5 percentile. 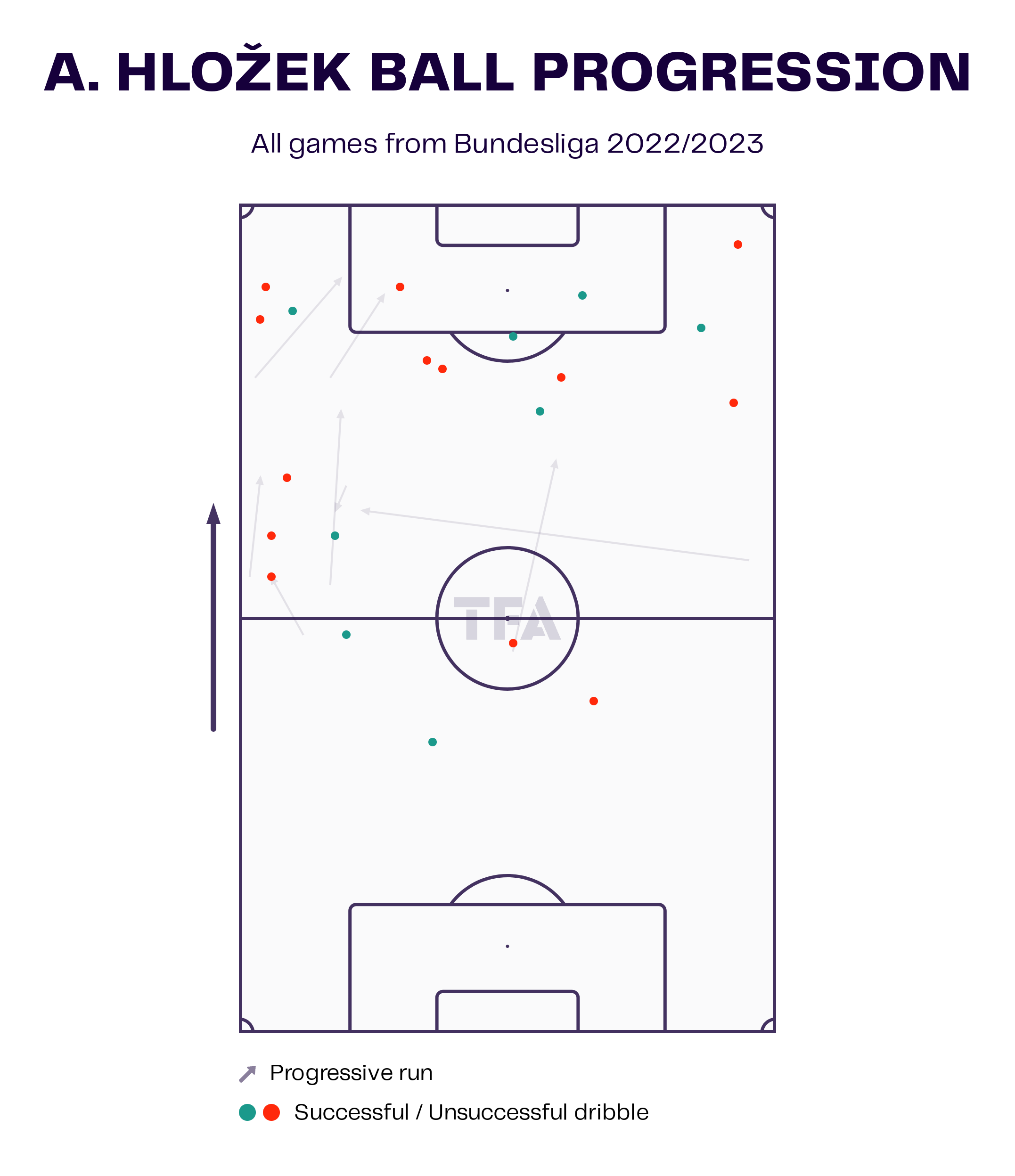 The above visual shows Adam Hlozek’s ball progression from the current Bundesliga season. With an average of 3.08 dribbles per game, Hlozek carries the ball forward with pace. His versatility in playing as a striker and as a winger gives Leverkusen an extra attacking edge. He has succeeded in 38.1% of the dribbles that he has attempted. Moreover, he also makes around 1.17 progressive runs per game. 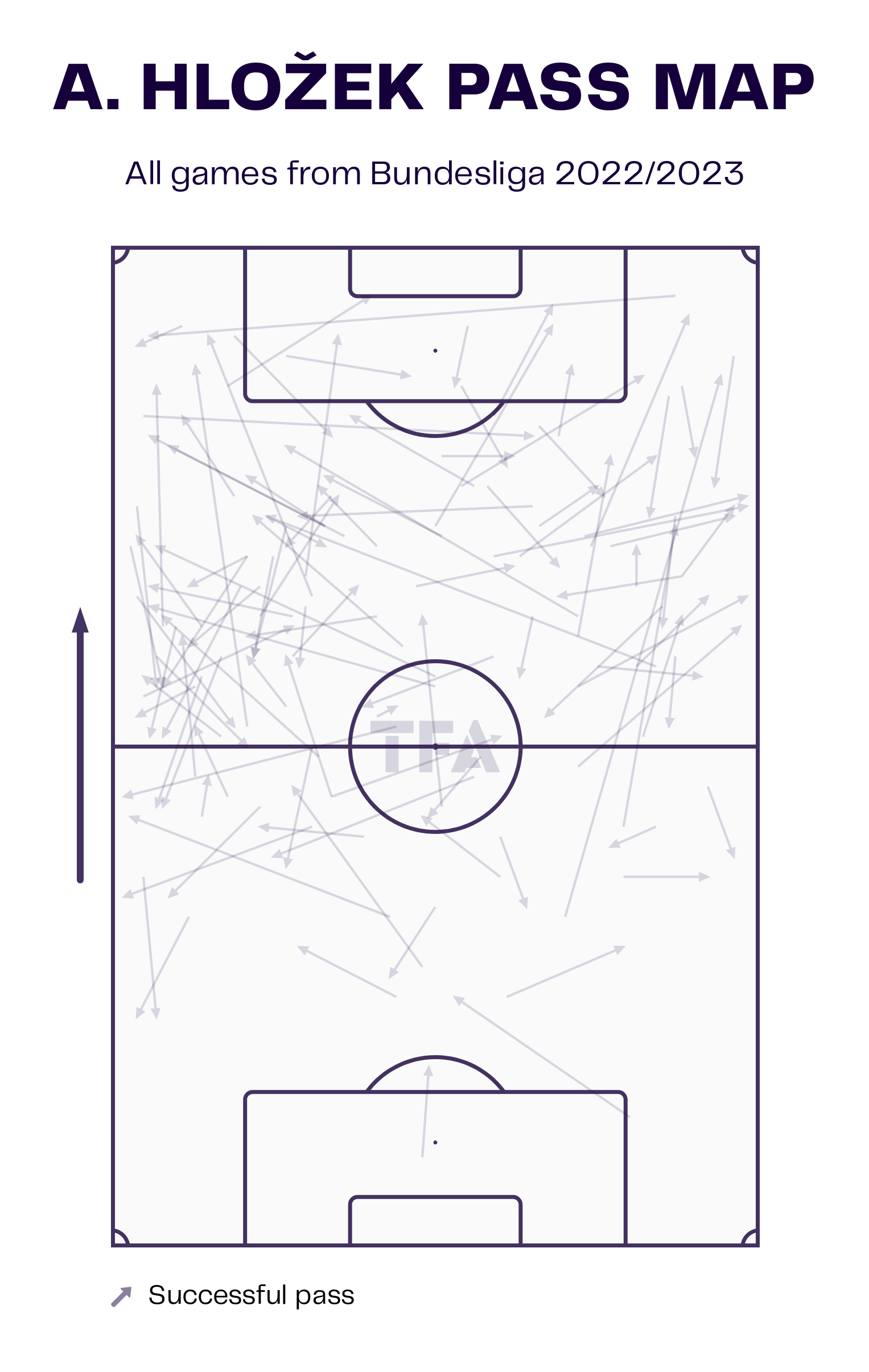 The above visual shows Hlozek’s pass map from the current Bundesliga season. He has completed an average of 20.55 passes per game with a completion rate of 83.6%. The pass map shows that the majority of his passes are played backwards for an arriving player, giving him time to get into position. He also plays around 2.35 passes into the final third per game with a success rate of 87.5%. Hlozek also makes an average of 1.03 passes into the penalty box with a success rate of 71.4%. 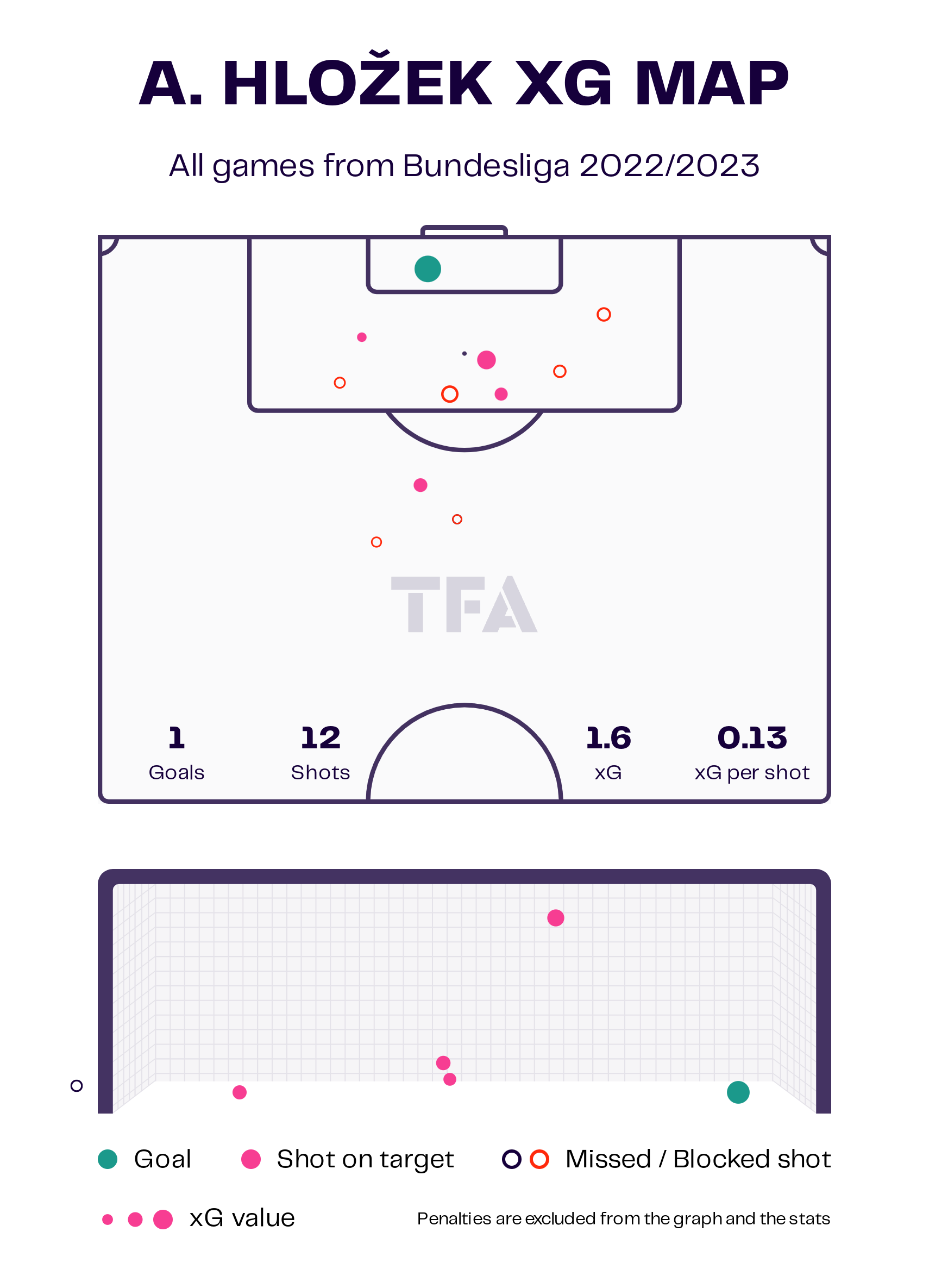 The above visual shows the xG map of Adam Hlozek from the current season. He has scored only one goal in 13 matches. Hlozek has attempted 12 shots, with five on target. He has scored an average of 0.15 goals per game with an average of 1.76 shots per game. He has a shooting accuracy of 41.6% this season. 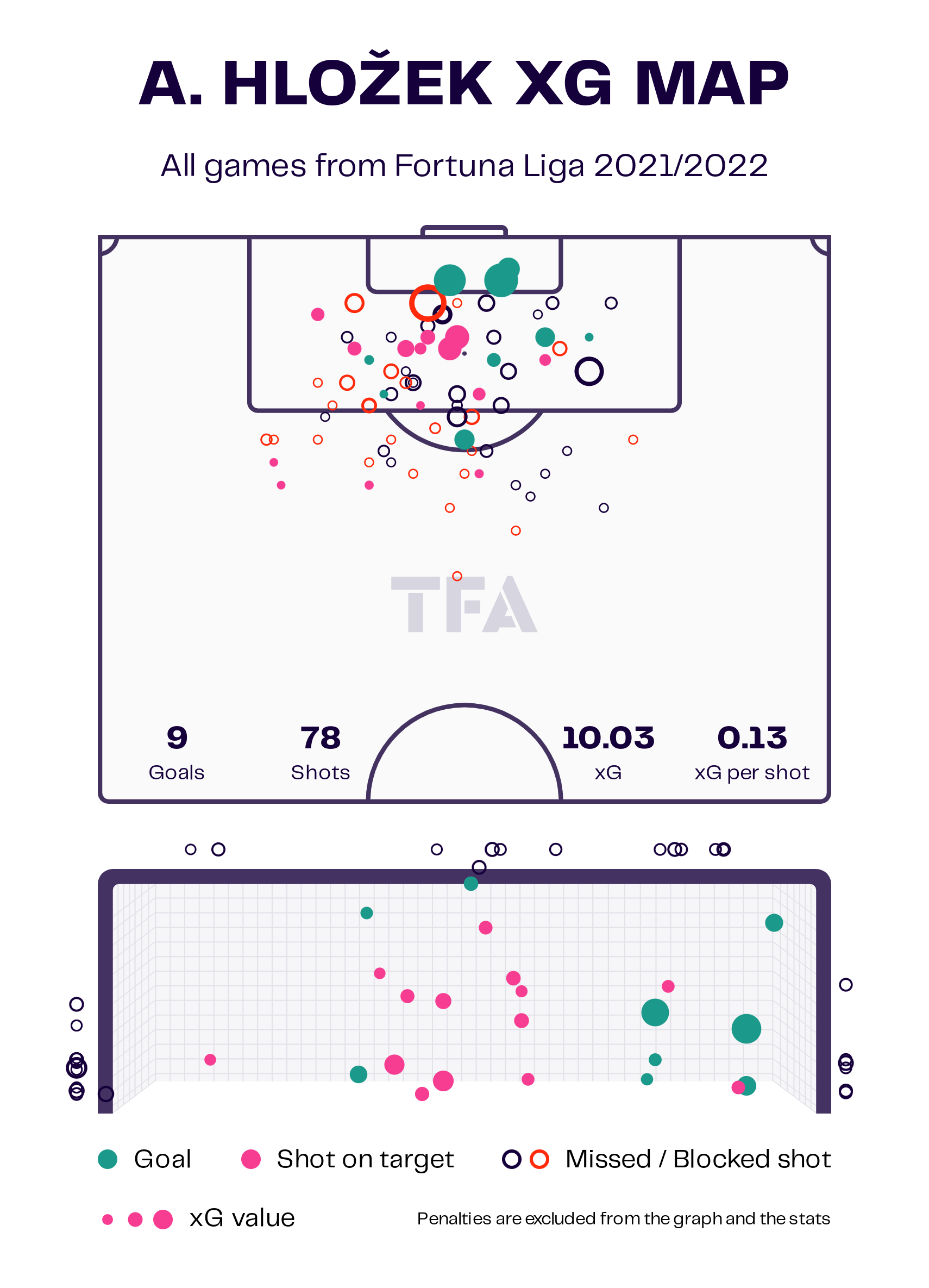 The above visual shows Adam Hlozek’s xG map from the previous season. He scored nine goals last season for Sparta Prague in the Fortuna Liga. Hlozek attempted a total of 79 shots, with 23 of them being on target. He scored an average of 0.27 goals per game with an average of 2.38 shots per game. Hlozek had a shooting accuracy of 29.5% last season, which he has improved this season. 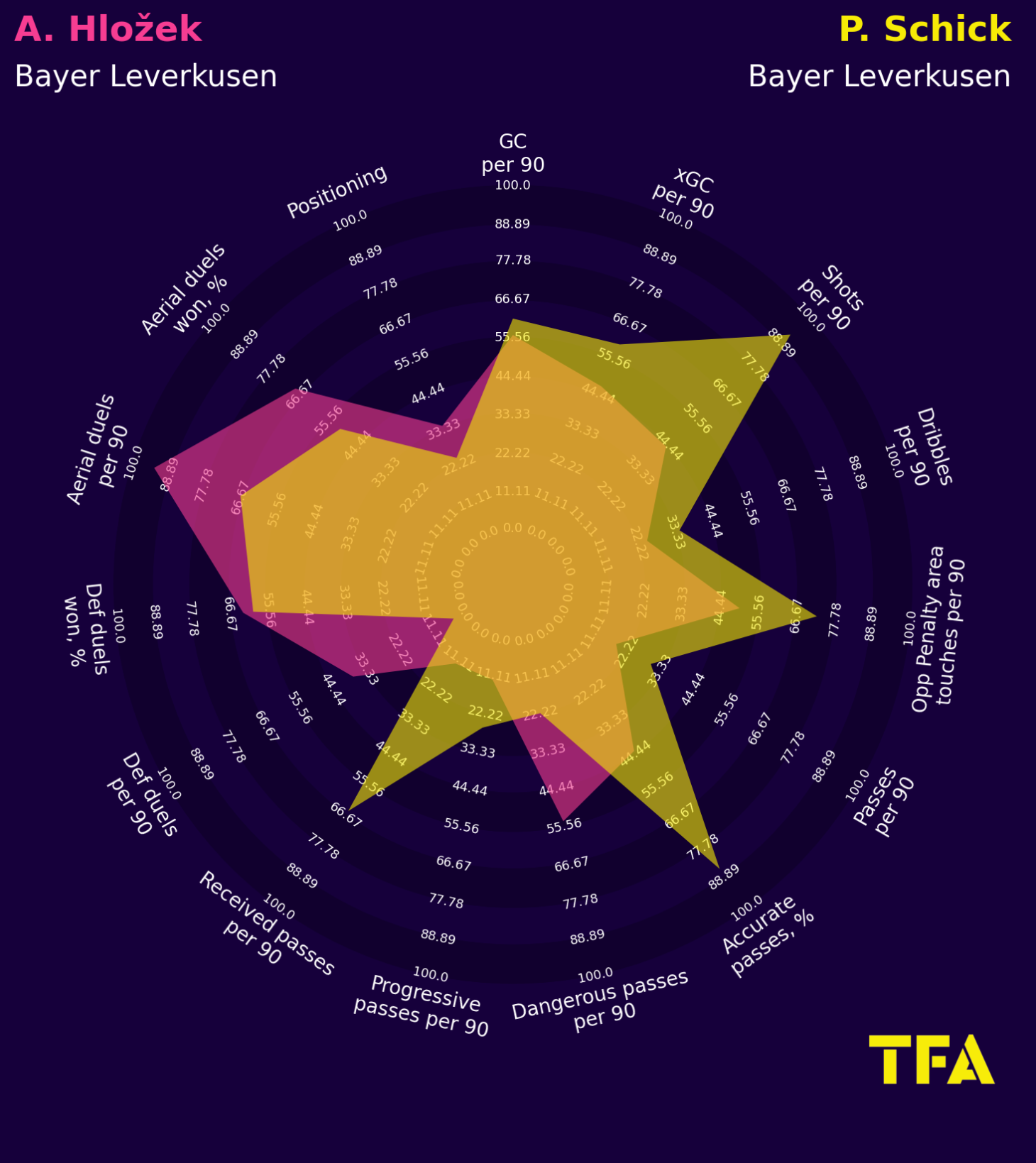 The above visual shows the comparison of Adam Hlozek’s and Patrik Schick’s radars. The duo has teamed up before in their national colors, where they have been explosive together. They are now back together at Bayer Leverkusen. While Adam Hlozek has better stats in defensive duels, aerial duels, and dangerous passes, Schick has better stats in all other metrics. But both players are having a pale season and will be looking to improve in 2023.

Looking at Adam Hlozek’s current form, the odds for Bayer Leverkusen are likely to go up in the 1×2 market. Meanwhile, the underlines are expected to thrive as long as he doesn’t regain his scoring form.

Adam Hlozek was regarded as one of the best talents to emerge from the Czech Republic in recent times. But he has not yet produced the kind of performances that gave him his reputation. The dip in form can almost be forgiven considering the difference in level between the two leagues. But coach Xabi Alonso and the player himself will be hoping to rediscover his scoring form as soon as possible.

Under the microscope: Why the 20-year-old Bayer Leverkusen centre-back is on...